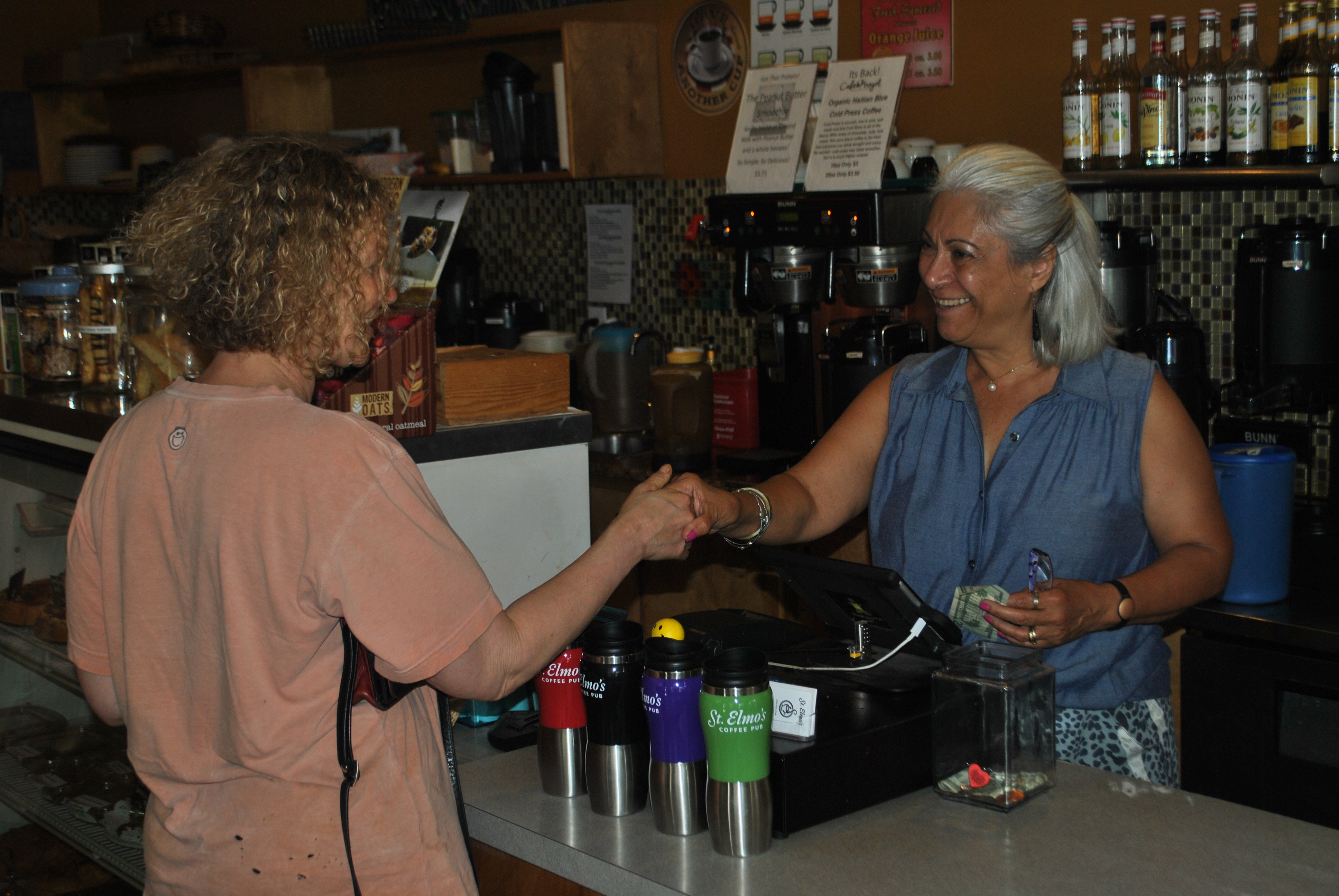 When Nora Partlow and her former business partner Scott Mitchell opened St. Elmo’s Coffee Pub at 2300 Mount Vernon Ave. in 1996, Partlow recalled that Mount Vernon Avenue in Del Ray was not the desirable destination that it is now.

She said that businesses came and went with alarming regularity, the price of residential property was very low, and all people wanted was a community-gathering place where they could meet in their neighborhood. It was a tremendous risk that Partlow and Mitchell took to invest their own money in the new venture, but it paid off and has turned St. Elmo’s into one of the premier coffee shops in the area.

But at the age of 66, Partlow has decided to sell the local landmark and start a new chapter in her life. After receiving bids from seven prospective buyers, she chose Larry Ponzi and his wife Christine to succeed her. The couple already own Market 2 Market Del Ray and the Cafe Pizzaiolo restaurants in Shirlington Village and on Fern Street, respectively, and the parties hope to have their agreement formalized and approved by September.

“At my age of 66, I believe that it is time for me to move on,” Partlow said. “There’s so many things that I could be doing that wouldn’t be as stressful for me at this point, having to invest a lot of money to bring it to the next level that it would need to compete with all the new places that have opened up.

“That’s why I made my decision, because it’s my time to go. Everything has a beginning, everything has an end, and I think it’s the end of my era, and I’m leaving it for Larry to bring it to that next level. I know he’ll be very successful with it.”

Ponzi moved to Alexandria from New York a number of years ago, and has lived in the Del Ray area ever since, first as a renter and now as a homeowner with his wife. He has seen St. Elmo’s grow along with Mount Vernon Avenue, and said it is a critical part of the area’s growth. As such, he says he intends to keep the St. Elmo’s name and concept, and make only minor changes.

“I have seen it from its inception, I’ve seen Del Ray grow around it, and I’ve been in business in this area all my career, so I’ve admired the location and the neighborhood feel,” Ponzi said. “I just think that it’s a great name, a great space and it’s a great location. We can even make what St. Elmo’s is; we can add more to it. We can do fresh food, fresh salads and sandwiches. We’re not going to change the market at all, but we can utilize the strengths of those businesses and add a little bit more offerings to St. Elmo’s.

“There’s so much work and so much success that has been put in by Nora to St. Elmo’s that it would be a big mistake to lose all that she has done there. I see it as a neighborhood institution, and I think most people do, so I think that we would join everybody in wanting to keep that going.”

Under a special use permit application filed earlier this month, Ponzi notes that he intends to apply for a license to sell alcohol on site, believing it would allow the cafe to make more money and thus keep pace with the high rents for commercial properties in Del Ray.

“Since there are many other businesses on The Avenue that sell alcohol, we do not believe this will increase our traffic or patronage (covers); rather, we believe this will raise our check average and therefore gives us stronger revenues to make a sustainable business into the future,” Ponzi writes in the application.

As such, Ponzi intends to offer the wines and craft beers he already sells at Market 2 Market, which he believes will serve as a strong opportunity for some cross-promotion of his neighboring businesses.

“We’re in the beer and wine business as well, and with the hours that St. Elmo’s already has, it makes perfect sense to us that having these offerings of some good, small-batch wines by the glass and bottles and the craft beer selection, we have over 200 types of American craft
beer already in the market,” he said. “To open that up to be able to sell what people enjoy, a good glass of wine or a good craft beer, is just a further amenity and we feel it will really help our sales as well.”

Partlow noted that Ponzi was one of seven interested buyers for the cafe, and said other proposals involved changing the St. Elmo’s name and concept to something different from what it currently is.

“As many corporate entities are interested to buy the St. Elmo’s business and change it to their own ‘brand,’ we wish to preserve this homegrown neighborhood gem, and we have an agreement with Nora Partlow to make this happen,” Ponzi wrote in his application. “This is a major factor in Nora’s wish to sell the business to us, as she knows us well from both living in the neighborhood and patronizing the business for 20 years as well as operating next to her at Market 2 Market for the past four years.

“The primary focus of the restaurant will not change, nor will any existing condition that the current SUP contains. We will continue to be family friendly and sell coffee, bakeries, salads and sandwiches. We will also retain all of the current employees of St. Elmo’s and honor all of the salary/benefits in place.”

There are currently nine employees at St. Elmo’s, of which four work full time. Ponzi is hopeful he can keep the café as one of Del Ray’s most popular places to eat and drink, even with the competition that comes with being situated along Mount Vernon Avenue.

“I think it draws more people to Del Ray and keeps people in the neighborhood because there are a lot of good options. I could see what we want to retain and what we want to add to it, and so it makes perfect sense. I haven’t been more confident with what we as a team can do with the business.”

Meanwhile, Partlow intends to spend more time with her family, and continue to work as a neighborhood realtor with Coldwell Banker. Ponzi knows he has big shoes to fill.

“She has started it all,” he said. “Del Ray would not be where it is without her, without what she’s done. She was a pioneer on Mount Vernon Avenue.”

Olivia Anderson - May 19, 2022
By Kimberly Jackson | [email protected]tmail.com Driving through Old Town, tourists might miss one of the oldest places in the city, the Old Presbyterian Meeting House....