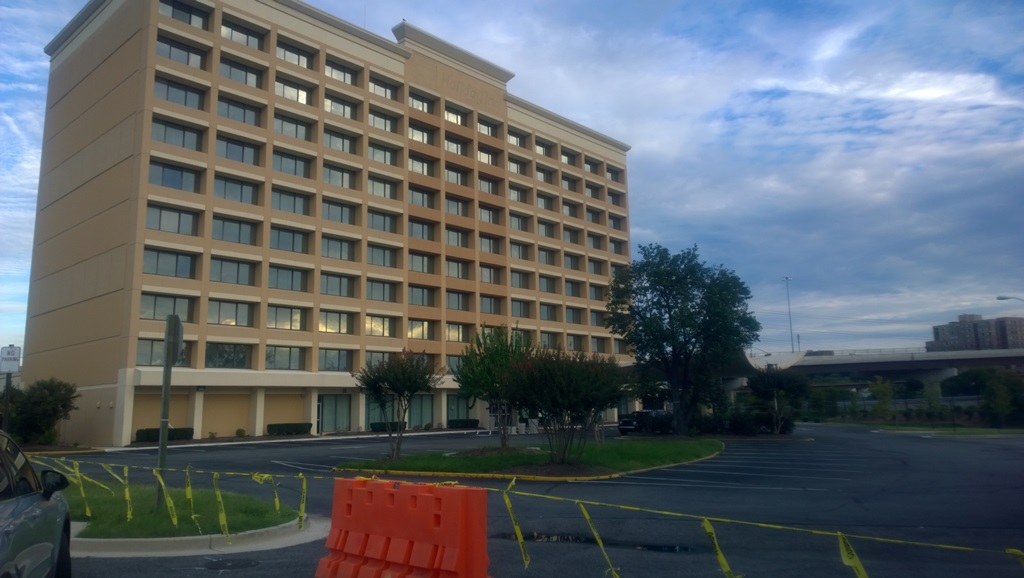 Construction on the National Science Foundation’s new building in Eisenhower West continues apace, but now it seems that one of the area’s oldest buildings is set to reopen as a hotel once more.

Since its opening in 1967, the Holiday Inn at 2460 Eisenhower Ave. was an accommodations fixture just off the Capital Beltway in Hoffman Town Center until it closed in September last year.

The original plan behind the closure was for the 197-room hotel to transform into one with 659 rooms, with its height increasing by 75 feet to 225 feet. It was also set to have a parking garage with 706 spaces and a 50,000 square-foot conference center. But the plan was withdrawn after a review by the city’s Carlyle/Eisenhower East Design Review Board last July.

Now, the hotel is set to be sold by owner Hoffman Co. to an as yet unnamed firm, which is expected to reopen the hotel as a Holiday Inn. The news was first reported by Michael Neibauer of the Washington Business Journal last month, citing multiple unnamed sources.

City Councilor John Chapman, the only local elected official on the neighborhood’s design review board, confirmed his knowledge of the proposed sale and reopening, while requests for comment from other board members and city staff were not returned. Lauren Douglas, president of Hoffman Town Center, also did not respond to requests for comment. Chapman said any change of ownership would likely require a change to the property’s special use permit, and he did not expect any progress on a new SUP until the fall.

The hotel’s proposed expansion was part of the city’s plan to lure the Transportation Security Administration headquarters to the Eisenhower Valley, having already secured the National Science Foundation’s move from Arlington. The proposed hotel would have occupied four acres south of Eisenhower Avenue between the westbound Capital Beltway ramp to Telegraph Road and the flyover ramp from the eastbound Beltway. It also would have been made available to the NSF for their use.

But when it came up for review by the board, city staff expressed concerns about the proposal, particularly regarding how much density would be added at the site. There were also concerns about vehicular and pedestrian access, especially as the plans did not indicate how pedestrians could walk to the Eisenhower Avenue Metro station or the new NSF building. Finally, the proposed location for an access road came under scrutiny, as it would have created challenges for vehicles trying to reach the site.

“In addition to vehicular circulation concerns, the proposed access location creates several other challenges to the overall site design; including the location of the main building entrance, drop off, garage entrance and pedestrian circulation,” said a staff report on the proposal dated July 17, 2014. “As a result, the main building entrance and drop-off are located on the wrong side of the access drive.

“To get to the drop-off area, one would have to pass the entrance and turn around either in a parking lot or make a U-turn in the middle of the access drive. Once at the drop off area, one must drive around the building, past the loading area to get the parking garage.”

Hoffman’s land use attorney withdrew the application to expand in February, and so the hotel seems set to reopen unchanged. With the NSF construction looking set to drive even more development in the neighborhood, Chapman said the Holiday Inn represents a significant part of that.

“The better the situation is down there when the NSF comes, I think the more activity and more economic development opportunities there will be for that entire corridor,” he said. “I know JM Zell Partners Ltd. and some of the other developers in that area are trying to get their projects at least breaking ground if they haven’t already so they can be prepared on these and when new employees start to look for places to stay overnight and live and play and whatever. I think everybody is trying to get up and running as quickly as possible.

“I think the thing is to be ready for NSF when it comes and really have some plans for the visitors that they have coming in as well as being able to attract some other tenants possibly when they settle down.”