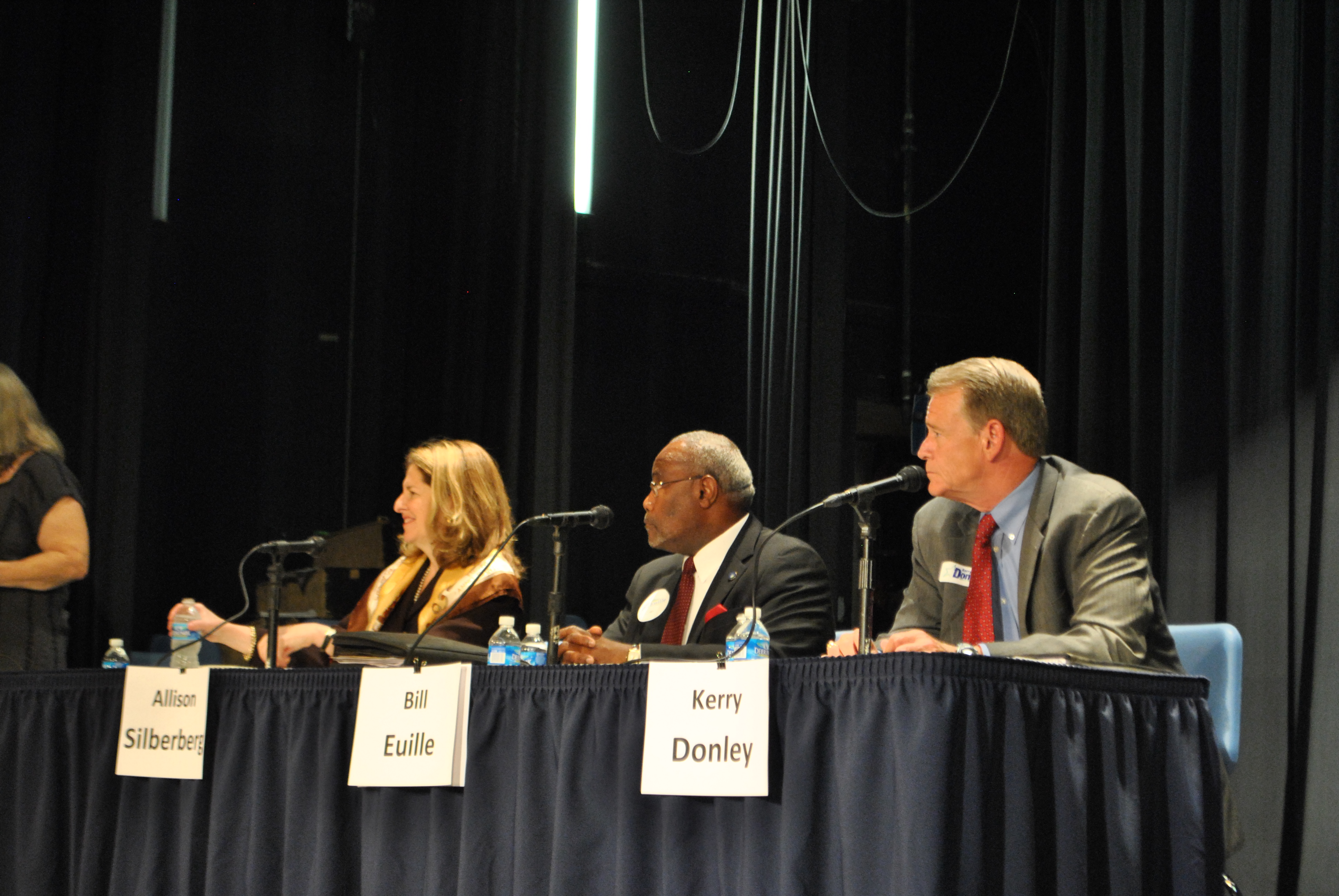 Alexandria’s Democratic contenders for mayor took one last opportunity to differentiate themselves from their opponents Tuesday night in the campaign’s final debate at George Washington Middle School.

But it was a relatively low key affair, compared with previous candidate forums. The three mayoral suitors — perhaps because of an abridged 30-minute time slot — focused more on their own agendas than openly sniping at each other’s records.

Asked his top priority in the realm of transportation and reducing local congestion — excluding the planned Potomac Yard Metro station — Euille emphasized the need to improve the availability and accessibility of alternate modes of transit.

“We are well underway with the [U.S.] Route 1 corridor transit way,” he said. “We need to make that same commitment to transit corridors B and C, so we have bus rapid transit both south and west in the city and east and north.

“On other ways to create less congestion, I came up with the idea for the King Street trolley, which has transported 4.6 million people since its inception. I think there are opportunities for something like that elsewhere in the city.”

Donley agreed that committing to bus rapid transit along both Duke Street and Eisenhower Avenue and Van Dorn and Beauregard streets is essential to improving traffic across the city. But he stressed the need to ensure new development is focused near transportation hubs.

“Transit-oriented development really is key to these issues,” he said. “The best example of this is really the Carlyle area. It’s got a confluence of a variety of modes of transportation — two Metro stations, bus stations and highway access — and … 50 percent of U.S. Patent and Trademark Office employees take mass transit. I think the traffic now on Duke Street is actually better than it was before.”

But Silberberg argued city officials should wait to see how well the U.S. Route 1 Metroway performs before committing any additional money to dedicated bus lanes.

“I love our bus system and I think DASH is great — I use DASH on a regular basis — and BRT is something I support. But I want to see first that the transit way along Jefferson Davis Highway is working well and is successful before putting money into corridors B and C.”

Euille offered some new insight on how he would spur redevelopment at the long-languishing Landmark Mall.

Asked about the nature of new development in Potomac Yard, Silberberg said a mix of commercial and residential is essential.

“It’s a great spot for mixed use,” she said. “Smart growth really will be key there. And South Potomac Yard is being developed as we speak, and it’s great, although there needs to be more open space.”

Although Euille and Silberberg both punted on a question about their greatest mistake or regret while in office — both said they were comfortable with all of their votes — Donley brought up an obscure event from 1988: when a van struck the Appomatix statue, originally
erected in 1889 at the intersection of Prince and Washington streets commemorating Confederate soldiers from Alexandria who died in the Civil War.

“It was a minor impact with major symbolism: we should have moved the Confederate statue,” he said. “We had the opportunity to move it elsewhere in the city after a car accident there. It’s obviously still a part of history, but we could have moved it somewhere else. My regret is that it symbolizes something that is not the Alexandria of the 21st century.”

Polls will be open from 6 a.m. until 7 p.m. For information about the ballot or where to vote, visit www.alexandriava.gov/elections.

Olivia Anderson - May 26, 2022
To the editor: Whether you commute to work by WMATA, DASH, carpool, driving or even by bike, WMATA service affects you. The region used to...