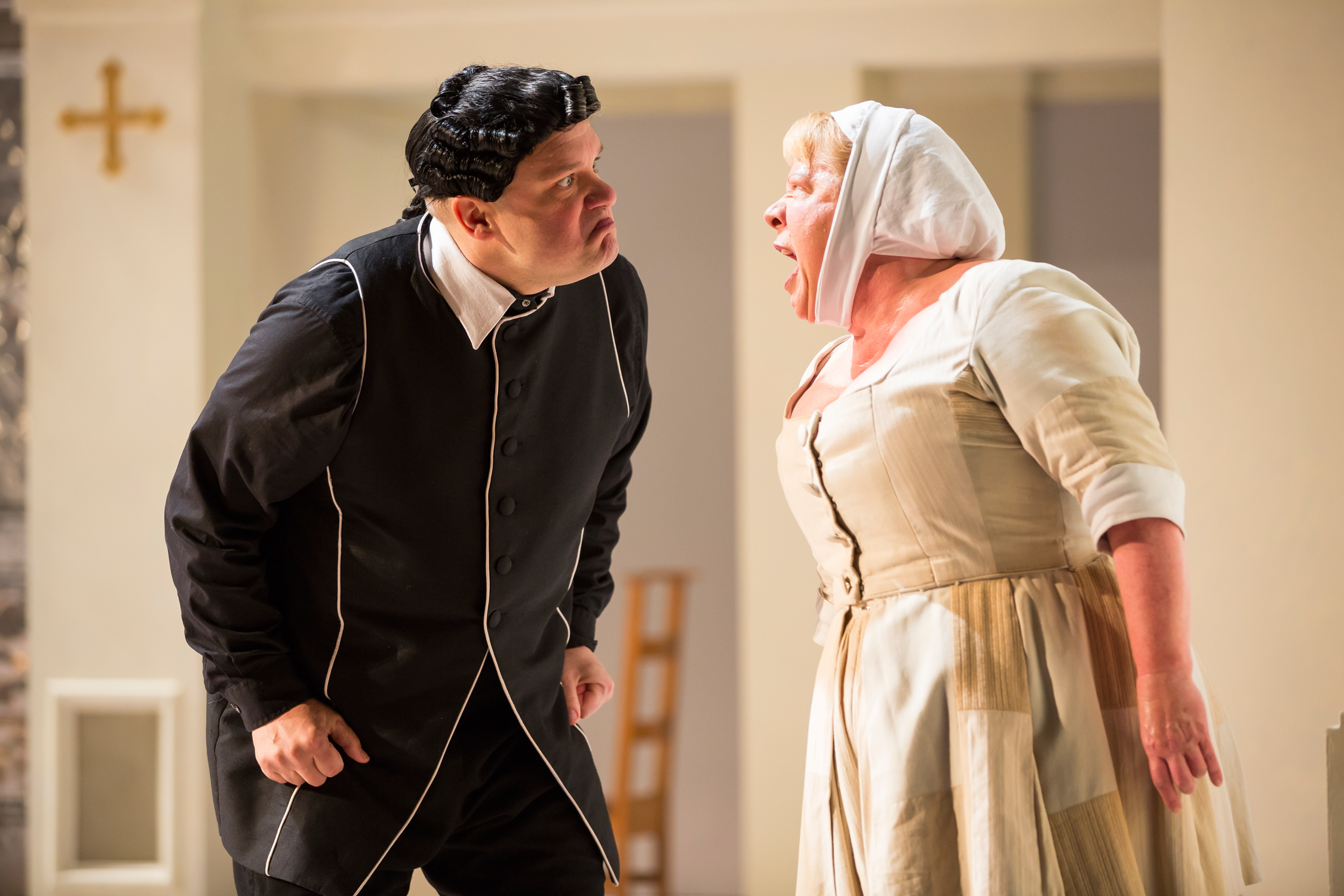 “Epic bromance upends noted family” might be the modern-day header for the tale of Tartuffe and Orgon, the paterfamilias of a 17th century bourgeois family. Or it might read: “Priest and his slimy sidekicks fake poverty to con Pernelle clan — maid claims teen daughter was used as barter.”

In Shakespeare Theatre Company’s production of “Tartuffe,” Molière’s timeless story of piety and politics, the eponymous con artist — “The Hypocrite” — brings down one of the town’s most prominent families with his fire-and-brimstone brand of religious fervor. Slick as a whistle, the devious flimflammer ingratiates himself into the home and gullible heart of Orgon, despite protestations from his household, who see right through the hustle.

“He has made me a new man without friendships or emotion,” Orgon boasts to his family, dismissing their pleadings and offering up his betrothed daughter, Mariane (Lenne Klingaman) as a sacrificial lamb.

In the second year of the troupe’s Comedie Française repertory series, director Dominique Serrand brings us a supremely elegant production of the play, guaranteed to make your hair curl and your funny bone twitch. Serrand is also the co-scenic designer with Tom Buderwitz, and the two have created a divinely muted set for the comic drama, drawing inspiration from the symmetrical Palladian architecture of Paris’ Hotel des Invalides and the exterior design of the Église Saint-Gervais to evoke an aura of piety.

Marcus Dilliard uses the  single-day timeline of the play by moving lighting across the stage from east to west, coloring the set with the pale, cool light of day, with rays of light pouring in through tall windows, culminating in the honeyed amber tones of sunset. It is very effective and lends a compelling air of urgency to the family’s dire circumstances.

Steven Epp plays the convincingly deceitful Tartuffe. With his tight-as-a-drum body and spare priestly garments, he looks like a former Calvin Klein model recently sprung from a torture chamber. Epp’s riveting portrayal of the holier-than-thou priest without a conscience is enhanced by his ability to quickly morph from insinuating charmer, proving his devotion through self-flagellations and submissive prostrations, to backstabbing villain. Luverne Seifert, who plays the duped husband and father Orgon in thrall to the machinations of Tartuffe, gives a commanding performance infused with bluster and swagger.

But amidst all the guile and terror inflicted on the family by Tartuffe, let us not forget what a phenomenal social commentator Molière is. The circumstances he devises are as dark as the comedy is light — and Suzanne Warmanen as Dorine, the wise and sassy servant, renders it brilliantly. When accused of defaming God by using a handkerchief as a bookmark between the pages of Elmire’s Bible, Dorine replies, “If a handkerchief can insult God, God needs more confidence!” She has Tartuffe’s sanctimonious number straight out of Heaven’s gate.

Elmire (Sofia Jean Gomez), the clever wife of Orgon, has her own way of handling the impostor. In one sexually charged scene, designed to prove to her husband that Tartuffe is nothing more than a fraud, she calculates an elaborate seduction to which Orgon is witness. Gomez is electrifying, bringing both fire and ice to the character.

Not to be ignored are Tartuffe’s henchmen, led by Laurent (Nathan Keepers). The duo lends a deliciously evil air to the entire proceedings, lurking around corners and perching above the action, all the better to eavesdrop or threaten.

Sonya Berlovitz informs the costuming with a freshly spare modernity by eliminating the distractions of heavily ornate brocades and embellishments, instead creating clothing that takes on meaning and symbolism and at the same time reflecting hilarity, solemnity and social import, depending on the character. The result lends more power to the story and drama to the players.