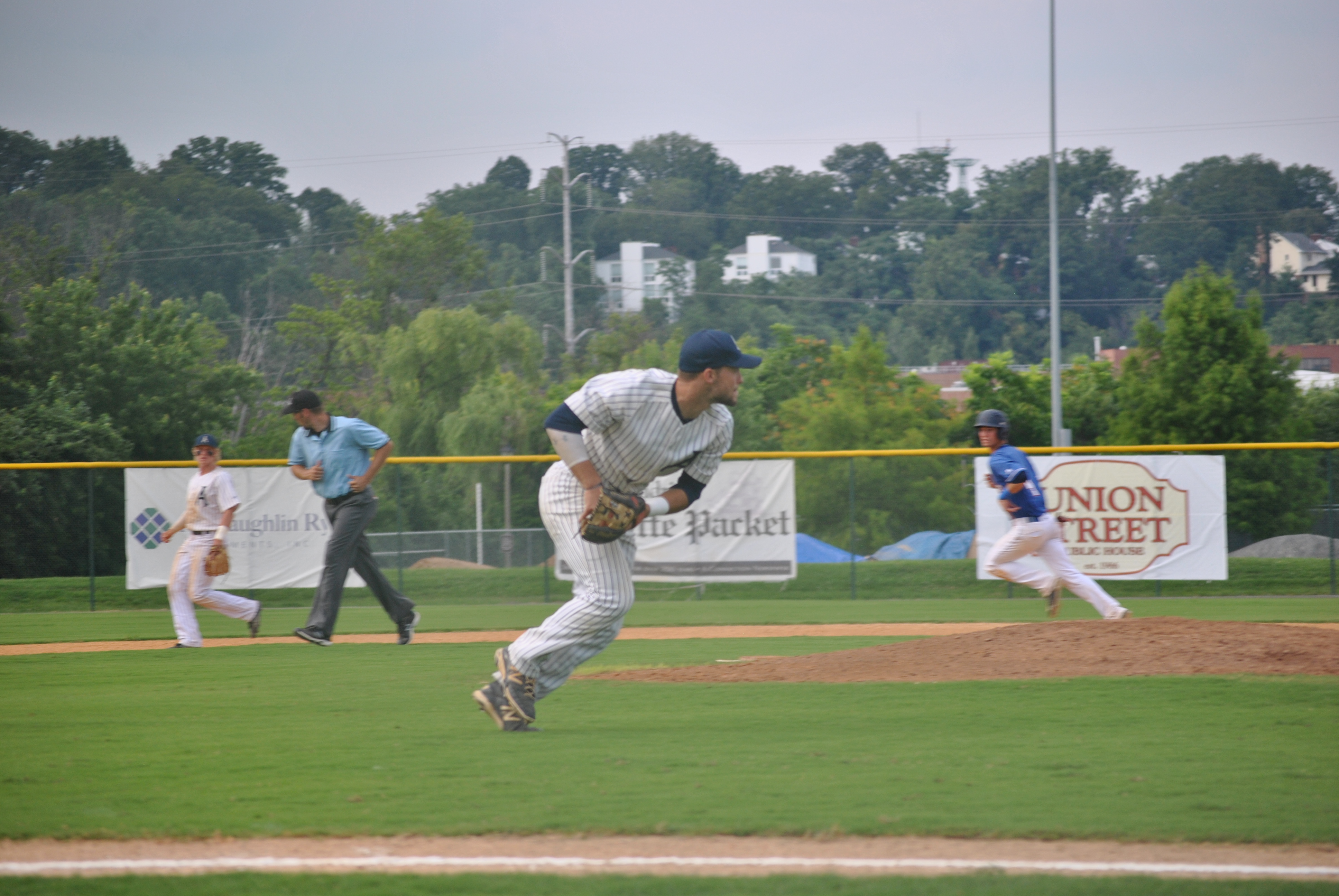 The all-star break beckoned Sunday for the Alexandria Aces as they began their doubleheader against the Silver Spring-Takoma Thunderbolts after a first half of the season interrupted by frequent rain and dogged by inconsistency on the diamond.

With an overall record of 12-13, and having not seen a win percentage above .500 since the first week, the Aces were desperate to take two wins before the break, in the hopes of preparing for what they hope will be a successful playoff push.

The team’s elation was clear at Frank Mann Field after the Aces beat their opponents 3-2 and 5-2 in two seven-inning games, improving to 14-13 on the season.

In the first game, the home side took the lead on an RBI triple from Brett Netzer in the third inning that scored Michael Kleinman. Anthony Pacheco then tacked on two more runs with a 2-RBI single in the fourth. Starting pitcher Jake Wersinger earned the win after five strong innings, while Brandon Justice notched a save.

Later, the Aces trailed 2-0 in the second game as they entered the sixth inning. But an RBI triple from Mike Marcinko scored Danny Pardo and cut the deficit to 2-1, and an RBI double in the seventh from Malcolm Nachmanoff brought home Jackson Owens to tie, sending the game into extra innings.

It took the Aces until the ninth to go ahead, as Netzer scored Beau Hall with an RBI single. Insurance came as Kleinman was walked in after Marcinko was hit by a pitch, then Netzer scored on a wild pitch.

That stretched Alexandria’s winning streak to three games, and is part of what they see as crucial momentum.

“About a week and a half ago, we were in Baltimore and had an opportunity to sweep a doubleheader and get back to .500,” Aces head coach David DeSilva said. “We didn’t do that; we dropped two games and then we dropped the next three and were feeling down on ourselves.

“We got together as a team, we got together as a coaching staff and said we were going to make some changes. I think the [Bethesda] Big Train game last week [a 6-5 win] — I actually got tossed in the ninth inning — I think that fired the guys up a little bit. We scored four runs in the bottom of the ninth inning to win that game and we’ve only lost two games since. I think that was a big momentum builder and we’ve carried it on.”

It marks a change for the Aces, who have seen their schedule affected dramatically because of the recent poor weather. It has been frustrating for the coaches, especially since they will need to play several doubleheaders to fit the remaining games in, but DeSilva is impressed with his players’ response.

“I can’t tell you how good it’s felt the last three days to wake up and see the sun shining,” he said. “I think the guys are happy to get into a little bit of a routine and a rhythm and it’s showing on the field. We’ve tried to do some things as a team, we’ve tried to make sure the guys stay in the gym and pitchers throw their bullpens. The cages don’t tend to stay too wet too long, so we’ve got some extra work in here when we haven’t got a game in that day.”

The players have been similarly frustrated with Mother Nature, but said they were pleased to establish a routine in recent days.

“We were itching to get out here, a lot of guys waited for the rain to stop and were still hitting in the cage,” Marcinko said. “It shows the kind of guys [we have]; they’re not just sitting around waiting for the games, they’re trying to get better every day even if we don’t play. I think that’s leading to our success right now.”

“We’re up here to play baseball, so when you wake up and you see clouds in the sky and rain coming down, it’s not a very good feeling,” added Netzer. “Getting coaches’ texts every day saying we’re canceled, it’s not very fun, but we’re making up with some doubleheaders, so it’s going to be a busy couple of weeks, but it’s what we’re here for.

“We’ve been rained out so much that we just haven’t been coming to the field every day and getting in a groove. Now we’re playing doubleheaders and the weather’s been a little bit better, I think it’s just getting out here every day and seeing each other and finally clicking.”

After the all-star break, the Aces face a tough stretch of three doubleheaders in three days, then two more the following week. Sitting in the third and final playoff spot in the Cal Ripken League’s South Division, the Aces know they have to make improvements and cope with fatigue.

“We’re trying to put a positive spin on it,” De Silva said. “It’s tough for these guys, they played 56 or more games in their college seasons and came here.

“They’re tired, they went through fall ball, they went through spring. It’s July, and these guys are tired, and it’s hitting that point in the season where a lot of guys are thinking about going home, thinking about going on vacation before they go back to school. It’s something mentally that we’re going to have to get these guys prepared for, but we’re heading in the right direction.”