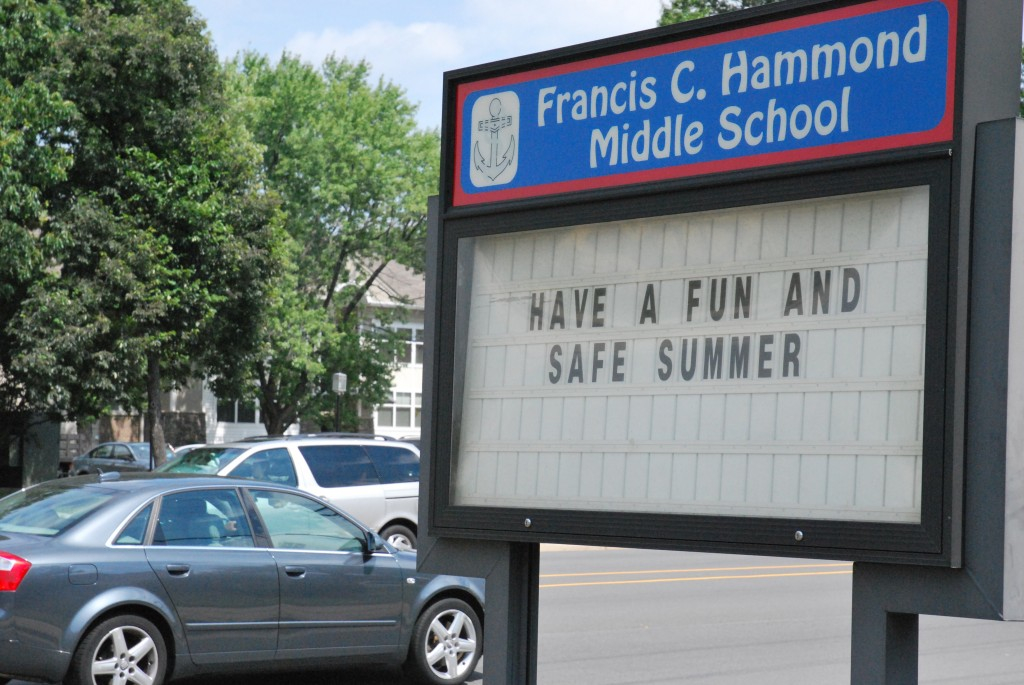 Changes are afoot in the leadership of one elementary school and one middle school in Alexandria City Public Schools, as two individuals with strong ties to the school district take on new roles as principal for the upcoming school year.

Both step into school environments with a diverse student population, and see it as something that make Ramsay and Hammond good places to teach.

“What sets it apart for me is the extreme diversity of Hammond Middle School,” said Hall. “It’s a true melting pot and very representative of our area that we live in. We have phenomenal teachers who truly work hard to make sure that school is a great place for students to learn and also the community that we’re going to build here.”

“The diverse learning environment here, all the diversity, all the different backgrounds that children bring to the school make it, I think, an ideal 21st-century learning environment in terms of preparing our students for the global world and the global economy and having a keen understanding and respect for different religious groups and different ethnicities and traditions,” Routhouska said. “I myself got a minor in religious studies in my undergraduate program, so I have a great respect for different walks of life and perspectives. That appeals to me here. I think that if we make kids successful at William Ramsay, they are set up to be successful in other educational buildings and as lifelong learners.

“Another piece is just the great mindset of the families that come to Ramsay. So many of Ramsay’s families have come to this country and are new to this country, and are seeking opportunities and figuring out how to be successful and support their child. I think another piece to that is the desire for the parents to be actively involved here and to be educated on how to help their children be successful at William Ramsay and in the United States.”

Both recognize that it also can be a challenge to accommodate such diverse students from so many different backgrounds, and Hall said that already she has looked to help students and parents feel included even in the early stages of her new role.

“It’s so interesting; when I had the meet and greet with the parents, I had a sign-in sheet for parents so I could communicate with them,” she said. “I had to have them in three different languages: English, Spanish and Arabic, which are dominant languages. Just being mindful that when parents come in the school that they may not speak English and so having staff accessible to greet them and make them feel welcome.”

As such, Routhouska said one of his main priorities is to ensure that everyone at Ramsay — parents, students, staff and the like — all are pulling in the same direction and that they create a positive learning environment. He said the school has been troubled by high staff turnover in recent years, and wants to find a way to address that beyond a simple financial solution from human resources.

“[A] big piece of that is coming in and engaging both staff and community and creating a shared vision for the school that makes everybody feel like they’re a part of a process here and gives realignment to everybody’s efforts so that we are all heading in the same direction and have that shared vision so that, again, we’re all heading in the same direction in all our efforts, and not going different ways or have pockets where certain people know things and understand things and other areas where they don’t.”

Hall agrees, and is hopeful of doing something similar to ensure that the environment at Hammond is as positive as possible.

“I think the challenges coming in as the new principal, my philosophy is always to speak first to understand,” she said. “I want to know everything that I need to know about Hammond, its community, the teachers. Then moving forward from there, making some of the best decisions to make sure that we are always moving in a positive manner.

“I don’t necessarily call it a challenge, but it’s just a part of the process. You evaluate what needs to be improved, you put the actions in place to improve them and then you keep moving and you’re improving and problem-solving.”

That evaluation of what is already in place at the school is integral for both as they adjust to their new roles, and is something they see as vital to ensure their students graduate from ACPS and become effective contributors to society.

“I’ve got to come in and assess what sort of programs are already in place,” Routhouska said. “I know that William Ramsay is a balanced literacy school, and that they use the Fountas and Pinnell framework as a means of assessing and leveling students and making decisions about placement. I need to get in and get my head back around that, as I’m coming from a school that didn’t subscribe to that same program. I also need to look at what sort of intervention resources they’re using that are not already division-identified ones.

“The curriculum guides for ACPS, I challenge anybody to go out and find better designed curriculum programs than the ones we have in ACPS. Really, my focus is to really make sure that we are doing the programs we have in place with fidelity before I consider what sort of new ones might be added. Looking at creating a shared vision and beefing up the positive behavior intervention system and school-wide behavior expectations are things I really want to target with staff in terms of developing them in time for the beginning of the coming school year.”

“As a former high school administrator, I always look at secondary learning as a sixth through 12th [grade] continuum, and not necessarily a nine through 12 or a six through eight continuum,” Hall said. “When I think about the great potential of our kids, I’m looking beyond eighth grade promotion.

“I want them all to graduate and have post-secondary plans, and so my goal is to ensure that at sixth grade, we are setting them on a trajectory to not only graduate from T.C. Williams but to go on and be great contributors to society.”