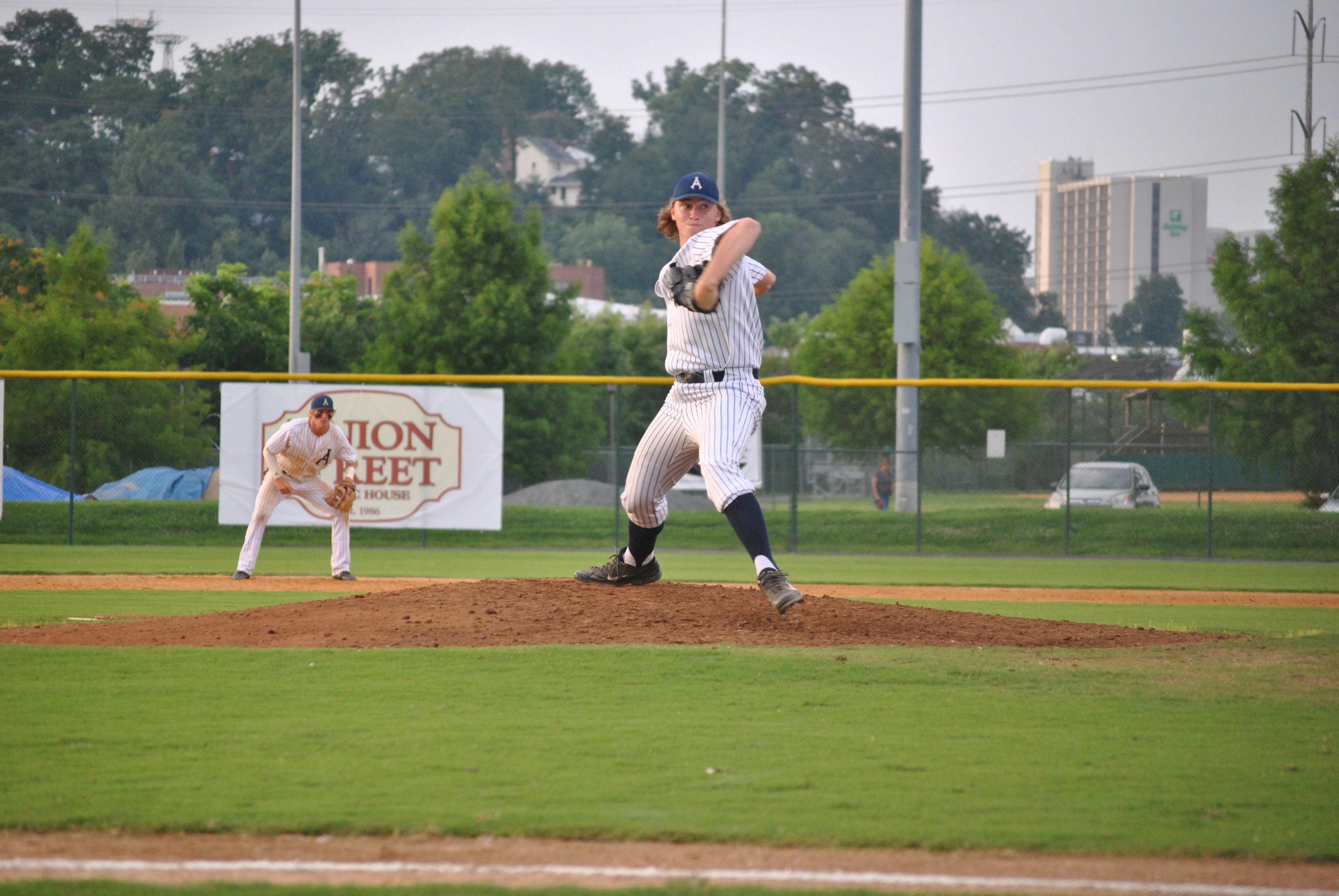 Players come from far and wide each summer to play for the Alexandria Aces, but this season a member of the roster is a Northern Virginia native and already familiar with all the Port City has to offer both on and off the diamond.

Pitcher Billy Lescher is a graduate of West Potomac High School and is a rising sophomore at the University of Pennsylvania. For the summer, he returned home to hone his trade at his hometown team in the Cal Ripken League before returning to school. He said he did not attend any Aces games when he was growing up, but the chance to play for them presented itself almost immediately when he enrolled with the Quakers.

“When I got to school in the fall, I was talking to one of my coaches, because we all play summer ball on the [Penn] team,” Lescher said. “He said that playing at the Aces was a possibility, and I was like, ‘That’s awesome, because I can live at home and play college baseball.’ It was a great deal.”

In high school, Lescher joined the West Potomac varsity baseball team as a sophomore, and he wasted no time in dominating on the hill for a strong Wolverines team. As a junior, Lescher threw a perfect game in the 2013 season opener against Mount Vernon, and later that year helped the Wolverines to the Patriot District semifinals.

The following year, he was named to the Conference 7 all-conference second team as West Potomac finished as conference runners-up. In 2014, Lescher was one of four Wolverines to commit to college programs, alongside Michael Barnes for the U.S. Merchant Marine Academy; A.J. Melvin for Washington and Jefferson College; and David Wagner for New York University.

Lescher made two appearances for Penn as a freshman in the recently concluded 2015 season. Away against Virginia Commonwealth University, he threw two thirds of an inning, then against NYIT he threw one full inning and recorded the first strikeout of his college career. Those performances came as the Quakers finished with a 22-15 record overall and a record of 16-4 against their fellow Ivy League opponents.

But the team could not translate that form into success in the postseason, as they lost 4-2 to Columbia in the Ivy League’s Gehrig Division playoff on May 2. As such, Lescher said he jumped at the chance to play for the Aces in the Cal Ripken League against some top opposition.

It has been a solid season for the right-hander so far, who at the time of writing held a record of 1-1 after pitching in eight games, two of which were starts. Over 14 innings pitched, Lescher has scattered 16 hits and one extra-base knock, giving up just seven runs. He currently has an ERA of 2.57, while his 17 strikeouts are tied for fourth-most among all Aces pitchers.

His win came against the Vienna River Dogs on July 16, when he threw three innings and gave up just two hits while striking out seven and walking three. It has been an inconsistent season for the Aces thus far, as they have seen their schedule affected by inclement weather and are forced to play a number of doubleheaders between now and the end of the regular season.

But with their fortunes beginning to slowly improve in the second half of the season, Lescher feels confident they can make a run at the playoffs in the south division.

“We’re on a tear right now, it’s good to finally be getting things going,” he said. “We’ve had some streaky spots in the middle where we lost a couple, but it’s good to be back over .500 and I think we’re going to make a solid run into the postseason.”

In spite of the weather, Aces players have been determined to work hard and improve, with batting practice and bullpen sessions still taking place even when games are postponed or suspended, as has been the case on numerous occasions this season. That hard work has started to bring results on the diamond, and Lescher said it bodes well for the future.

“I guess the improvements have already been made through these past six games [before the all-star break],” he said. “We’re starting to string some more hits together, taking better approaches at the plate. We’re doing pretty well as a staff, our staff has been great the whole year, so it’s awesome to see everything coming together.”

With the end of the season not far away, the Aces’ homegrown product soon will return to Penn for his sophomore year. And while it is too early to say whether he will return for more summer baseball in future seasons, Lescher has found being in Alexandria has been beneficial in a number of ways.

“It’s awesome,” he said. “Having my parents being able to come and see me play in the summer is great. Nothing beats sleeping in your own bed.”