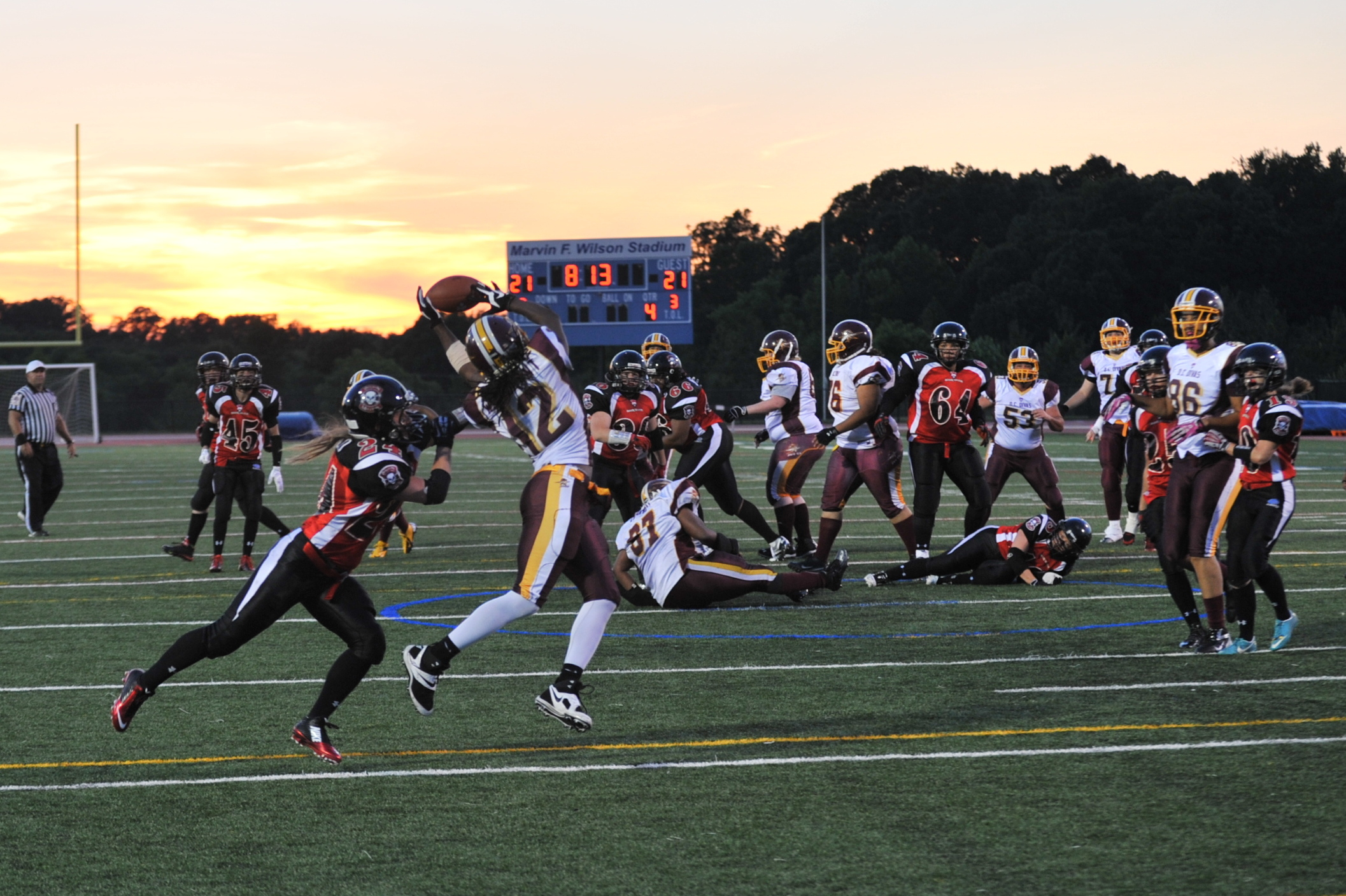 Seven years ago, Alexandria firefighter and former University of Arizona basketball player Ashley Whisonant gave flag football a try on a lark. Two years later, she joined a friend to try out for the D.C. Divas tackle football team for moral support. Little did she know she would soon be vying for a national title in the sport.

Last weekend, the Divas defeated the Chicago Force 43-24 to remain undefeated and advance to the Women’s Football Alliance championship game. Whisonant, a wide receiver, was a key piece in the winning effort, catching four passes for 45 yards and maintaining her hold atop the postseason receiving leader board.

Whisonant said her entrance and advancement in the sport weren’t driven by glory, but rather in search of enjoyment.

“It was just something to do after I graduated from college,” she said. “I wasn’t playing basketball anymore obviously, and I’ve always been a huge football fan. There wasn’t a women’s basketball league around here, but a lot of people I played with or against [in basketball], they play flag football around here.

“[That’s] how I got started; on a whim, [and I tried out for the Divas] because a teammate asked me to come with her,” she said. “I wasn’t opposed to it, but I wasn’t aspiring to be a pro tackle player. I just thought it would be fun to try out. As it turned out, I made a career out of it.”

That search for fulfillment also applies to Whisonant’s day job. She was a teacher from 2010 until 2012, when she made the move to the Alexandria Fire Department, in search of a more physically challenging career.

“I enjoy teaching and I still substitute when I can [in Fairfax County], since my schedule allows for a lot of days off,” she said. “It was more so that I wanted to do something more physical, more hands on. Sports gives you the urge to always do something [that challenges you].

“I saw an opportunity and I took it. It’s not something I aspired to do, but one of my teammates was a firefighter, so I went and I enjoy it, and I absolutely love my job right now, so I have no regrets.”

“I’ve noticed the competition increase lately, especially as we’ve gotten to play more teams that we don’t usually play this season,” she said. “We’ve gone up against Cleveland, Atlanta, and playing these teams you get to see throughout the nation that there are a lot of good teams and good players.

“And since this year we’ve gone so much further than we have in the past in the playoffs, I see how strong the league is. We see different types of teams in a way that’s comparable to the NFL: there are running quarterbacks, passing quarterbacks, dominant running backs and receivers, and we’re facing a different type of team every time.”

And while the level of recognition for women’s football has grown as well, Whisonant hopes to see even more people following the team and coming to games next season.

“It’s a very strong league and I hope it becomes more recognized, but I’ve already seen more people in the area are learning about the D.C. Divas,” she said. “It’s been a long time coming — 15 years since the team started — but people see me wearing a team T-shirt and people now will come up and say, ‘Oh, you play for the Divas,’ so it’s definitely growing.”

With the league semifinal out of the way, Whisonant’s eyes are set on the championship, scheduled for August 8 in Los Angeles against the Dallas Elite.

“I’m excited,” she said. “It’s my first time, and I know [the Divas] have only won once before. I’m still in awe about it. The team has been playing awesome; it’s definitely the best team we’ve had since I’ve been playing.

“It just feels like a team. Everyone’s together and there’s a camaraderie. It’s not just groups of players — it’s everybody and it just feels good. I feel like we deserve it.”