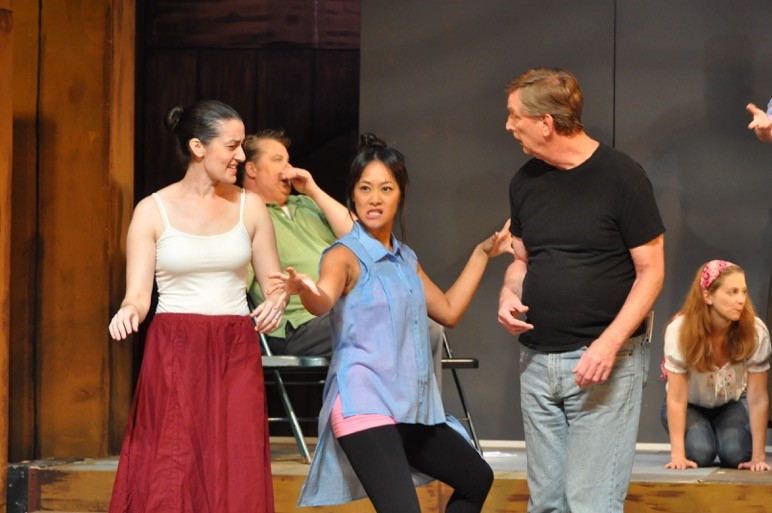 “Laughing Stock” is Charles Morey’s comic love story to summer stock theater companies and the actors and crews that make up these “little families.” For those who have ever attended a production in a barn-turned-theater, volunteered to work backstage or were talented enough to perform at their local playhouse, this comedy at the Little Theatre of Alexandria is sure to spark fond memories.

Shawn G. Byers does a handy job of directing this paean to seasonal theatre — an incestuous platform where summer romances bloom, show business careers are launched and lifelong friendships are  formed — or not.

The setting for our story is a 200-year-old barn where the director, Gordon (Lars Klores), and his casting director, Susannah (Kat Sanchez), are getting ready for auditions for their 82nd season and the cast-to-be is introduced in a series of hilarious vignettes referencing their experience or lack thereof: Mary (Abigail Ropp), an ingenue who seduces the director for the part; Vernon (Tom Flatt), an aging fop with a long list of theatre credits; Richfield (Ted
Culler), a seasoned actor who consistently bungles his lines; Jack (Michael Dobbyn), the handsome, romantic lead who is passing the summer before law school; Daisy (Natalie Fox), who brings along her mystic sensibilities; and Tyler (Will MacLeod), a cheery lad bent on pursuing Mary.

Together they neatly represent your garden-variety summer stock actors.

Gordon’s struggling little troupe is under the thumb of Barbara DeMartineau, a financial backer who insists he mount a production of “The Sound of Music.” But Gordon has his season planned for “King Lear,” “Dracule” (a ghoulish mystery based on Dracula which he himself has penned) and the farcical “Charley’s Aunt,” and he tries to dissuade Barbara from her edicts while sweet-talking her into mailing in her annual check.

As for management, the theater’s tiny budget is controlled by Craig (Larry Grey), an endearing martinet who is the office supply overlord and whose chief concerns are the disappearance of scriptmarking pencils and an ancient Coke machine. Sarah (Melissa Dunlap) is Gordon’s love interest and the troupe’s stage manager, and Henry (Richard Isaacs) is the harried set designer.

This comedy is certain to resonate with anyone who has ever taken an acting class, performed in even the smallest production or known anyone who has. You’ll revel in the egotism, melodrama and backstage antics.

In one hilarious bit, Susannah, who is directing their production of “Charley’s Aunt,” encourages the cast to pretend to be animals, a well-known acting exercise that draws on physical realization.

“Stay within your bubble,” she exhorts the odd collection of orangutans, gazelles and wildebeests. In another, she absurdly insists the lead character is experiencing a modern-day gender crisis because he sports a skirt. Vernon declares the playhouse to be “the Dachau of summer theatres.” But, as Sarah insists, “it’s just another playhouse season.”

When, at last, the hinted-at audience takes its seats in the steamy, dung-filled barn, we view the plays in fast-forward sequence. Slapstick ensues in spades as we witness the whatever-can-go-wrong-will-go-wrong performance of the three plays.

“Laughing Stock” is tons of fun for anyone who loves theatre and the absurd.