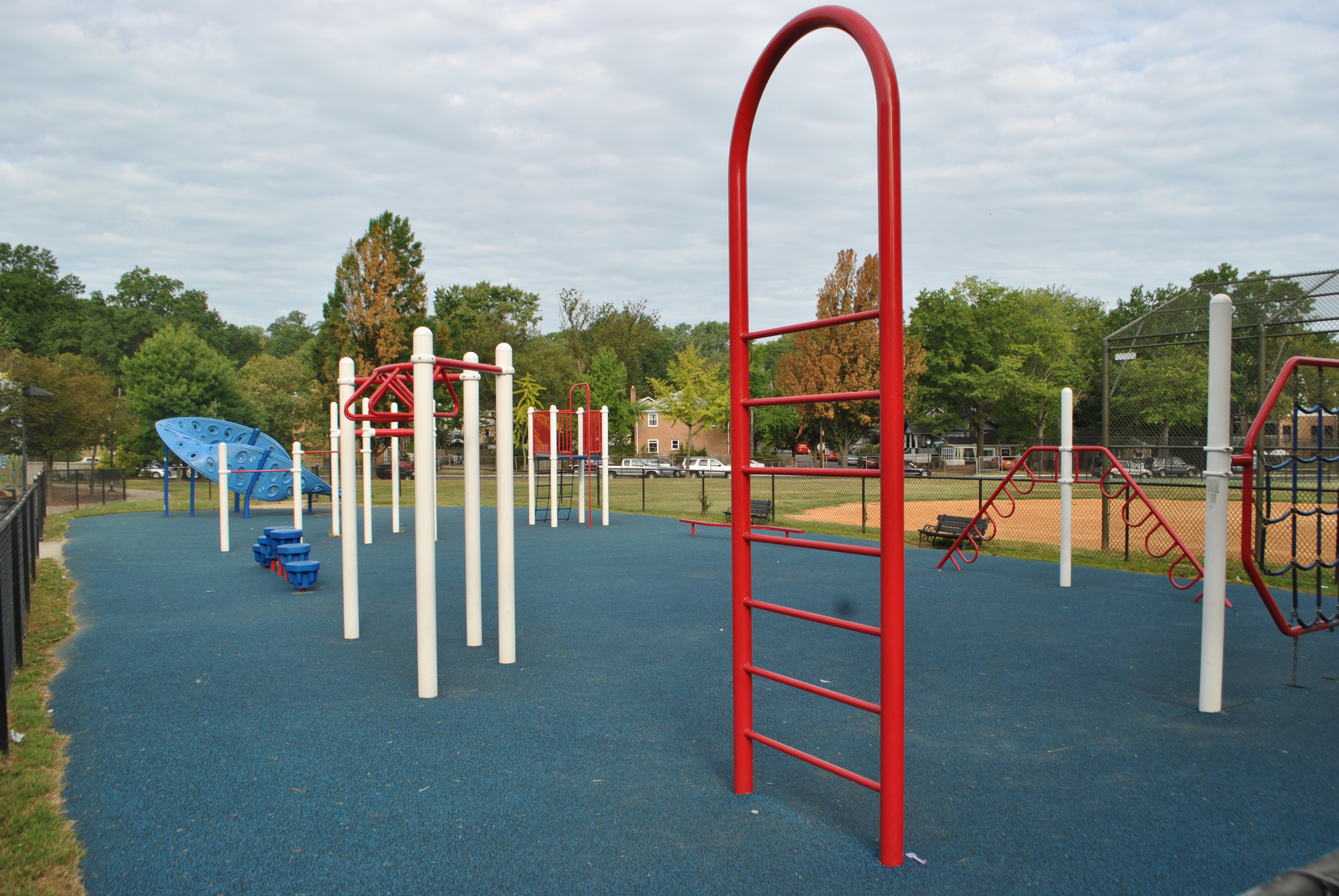 Each day at recess, Mount Vernon Community School principal Peter Balas estimates that around 400 children use the school playground and its equipment. Before and after school and on weekends, it also receives heavy use not only from the school’s students and parents, but others in the Del Ray neighborhood.

With such heavy usage, parts of the playground are starting to show their age. Around two years ago, the school’s parent teacher association began a fundraising effort to revitalize the playground, led by Liz Johnson and Kim Fondren of the PTA’s playground committee.

“[Aside] from the bright blue play equipment, the rest of the play area leaves much to be desired,” reads a page on the PTA’s website dedicated to the effort. “On rainy days, the small field is a mud pit surrounded by trees with exposed roots, the picnic table area is frequently flooded and the unappealing chain link fence is often times littered with trash and weeds.”

Efforts to revamp the playground began at the end of the 2013-2014 academic year as volunteers from the PTA and the community took on minor projects like redesigning the rock and tree garden. Now, they are looking to fix the playground’s drainage problems and create an environment that is “a more enriching, educational and fun place for kids to explore and play.”

“It started out as my parents doing spruce-up events and making the playground look better, making a flowerbed over here or a new play area over here,” Balas said. “It was more like a beautification effort. It then turned into parents through the PTA forming a subcommittee for playground revitalization and taking that on in an official capacity to start an effort to gain support and to start fundraising efforts for it.”

Since then, the PTA has proposed several new pieces of equipment for the playground, including a tee pee, tree decks and benches, an art wall, bongo drums and a balance log. They also hope to work with city staff and Alexandria City Public Schools’ facilities department to fix rain and runoff issues and to make it more accessible for those with disabilities through the addition of ramps and rubber surfacing.

As part of the PTA’s fundraising effort, it garnered $13,710 from Spring2ACTion, a one-day online fundraiser organized by ACT for Alexandria in which people can donate to various organizations around the city. They have raised another $5,185 on crowdfunding site Razoo and still are taking donations, having totaled about $35,000 thanks to contributions from other events.

The PTA also produced a video that features Balas, parents and students. In the video, Johnson explained part of the reasoning behind the revitalization and her hopes for the project. Johnson did not respond to multiple requests for comment.

“Our playground currently has a lot of physical play with the play structures and free-play space in terms of running between the structures,” she said in the video. “The kids really enjoy that; they play soccer. But we don’t have as much social play on the playground — areas for imaginative play.

The Alexandria City School Board has taken notice of the effort. In May, the board approved the $365,000 in funds from the 10-year capital budget to go towards the project — $265,000 is earmarked for this year and $100,000 for fiscal 2017. But ACPS spokeswoman Helen Lloyd noted that, as with any other public-private project, the fundraising portion must be completed in full for funds to be released, so the procurement process and contractual work can take place.

This project is an echo of the proposal to rebuild the schoolyard at Matthew Maury Elementary School, which received $250,000 in the city’s fiscal 2016 capital budget. That began as an initiative from parents and the PTA, and Lloyd said that more and more public-private partnerships are taking root throughout ACPS.

“I think you’re seeing this at more and more of our schools: parents stepping up and saying, ‘Oh, there’s this project we want to do and that project we want to do,’” Lloyd said. “We’ve always had that. We are a strong community in Alexandria and we tend to have very strong PTAs who want to get involved.”

Balas said the community spirit at Mount Vernon is strong, and there is a great deal of enthusiasm about the project.

“The teachers are excited, the parents are excited,” he said. “I’d say there’s general support around. I think between school support and PTA and parent support, school division support, it’s really just an effort now of making sure that we get the coolest playground.”