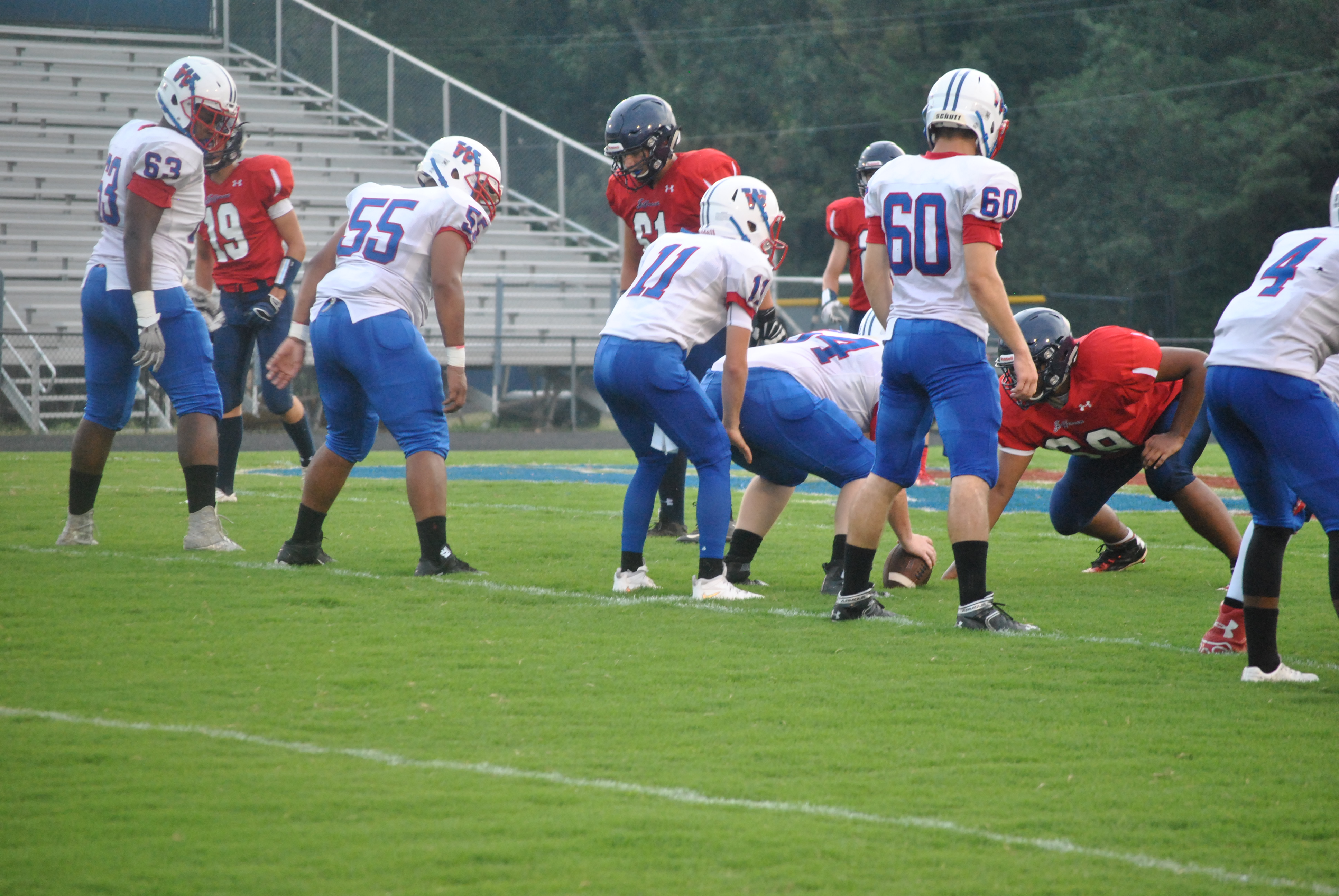 In the opening moments of T.C. Williams’ first regular season game of the new football season, an away contest against Thomas Jefferson High School, the nerves were palpable along the visitors’ sideline.

The Titans kicked off to start the game and saw senior Colson Jenkins recover a fumble from the Colonials returner, setting up T.C.’s offense in a superb position. But soon afterward, the Titans themselves fumbled and handed the ball back to their hosts in a difficult opening that left both coaches and players frustrated.

“We’ve been talking about pursuit and never giving up on plays, and that was just a true testament of that,” said Titans head coach Marc Matthie after the game. “It’s just getting kids to understand that you’ve got to come out with a sense of urgency. I think that’s what adults have, but kids generally don’t have a sense of urgency until they see the danger right in front of them.”

In their next series, senior running back Tavaris James settled those nerves with a 68-yard rushing touchdown to put the Titans on the scoreboard, and from there the rout was on, as T.C. emphatically won its opener 65-0. James finished with 190 rushing yards on 13 carries and four touchdowns, while also returning a punt for a touchdown.

Under Matthie, T.C.’s offense now is focused on the running game, with James seeing the bulk of the work at running back. Mahlique Booth, Charles Farmer and Erick Mejia also contributed to the running effort. Matthie said rushing in a Wing T Offense relies on trick plays to try and keep the defense off guard, with offensive linemen tasked with trapping their opponents and opening up big holes for the backs.

“[The offense] is based off my experience — I was a defense coordinator [at Oakton] — when the team is running on you it becomes very difficult for you to execute your defenses, motivate your kids,” Matthie said. “That’s something we wanted to do. We’ve got a lot of misdirection stuff involved in that and we want to take advantage of the whole football field. I thought we did that today.”

After running a spread offense in prior years, the players have adapted to the new system and feel it is working well.

“I think we did very good at running our plays, remembering what our scheme was,” said James. “The offensive line did a great job blocking for me.”

“Our offensive game keeps the defense guessing, pretty much,” Jenkins said. “We have the players to attack the defense and put points on the board.”

In spite of the run-heavy offense, the onus is still on the quarterback to run plays effectively and ensure that hand-offs and other moves are executed properly. This year, that responsibility falls to sophomore Ethan Hall, who made his varsity debut in front of his grandparents and other family members, who had driven from Arkansas to be at the game. It has been a learning experience for Hall, and Matthie feels his young charge is doing well so far.

“He’s done a good job, and he’s got a great coach in Chris Coyer who was the quarterback for the 2008 Oakton state semifinal team,” he said. “They’ve really had a good bond and he’s doing a really great job in growing and figuring out what he needs to do. We have a lot of great coaches on our staff with a lot of experience that really help our kids, and it’s awesome to see.”

The players agree that Hall has done a good job so far, and that his play belies his relative youth.

“[Hall] is maturing,” Jenkins said. “He’s gotten a lot better from last year to this [season]. He’s coming along, I feel like he’s going to be able to help us out.”

Meanwhile, Hall himself feels he has made strides already in learning the offense and gaining understanding with his teammates, something that will stand them in good stead over the course of a long season.

“The offense is pretty simple,” he said. “I picked it up pretty quickly and I like it. You learn the concept … and from there it’s just execution. We’ve got it down. We’re ready to go.”

The Titans have a number of tough challenges ahead, beginning tomorrow with a trip to Oakton and then a tough slate of conference games starting with an away game at Mount Vernon.

Even in the rout of Thomas Jefferson, several Titans coaches kept telling the players to keep the intensity up and not get lazy, and Matthie feels that is an important message for his team moving forward.

“We always have a tendency to want to get lazy and be complacent, adults and everybody in life,” he said. “It’s a constant reminder; we should be hearing that constantly in our lives, because there’s a goal we’re trying to accomplish. It’s always great to have that reiterated.”