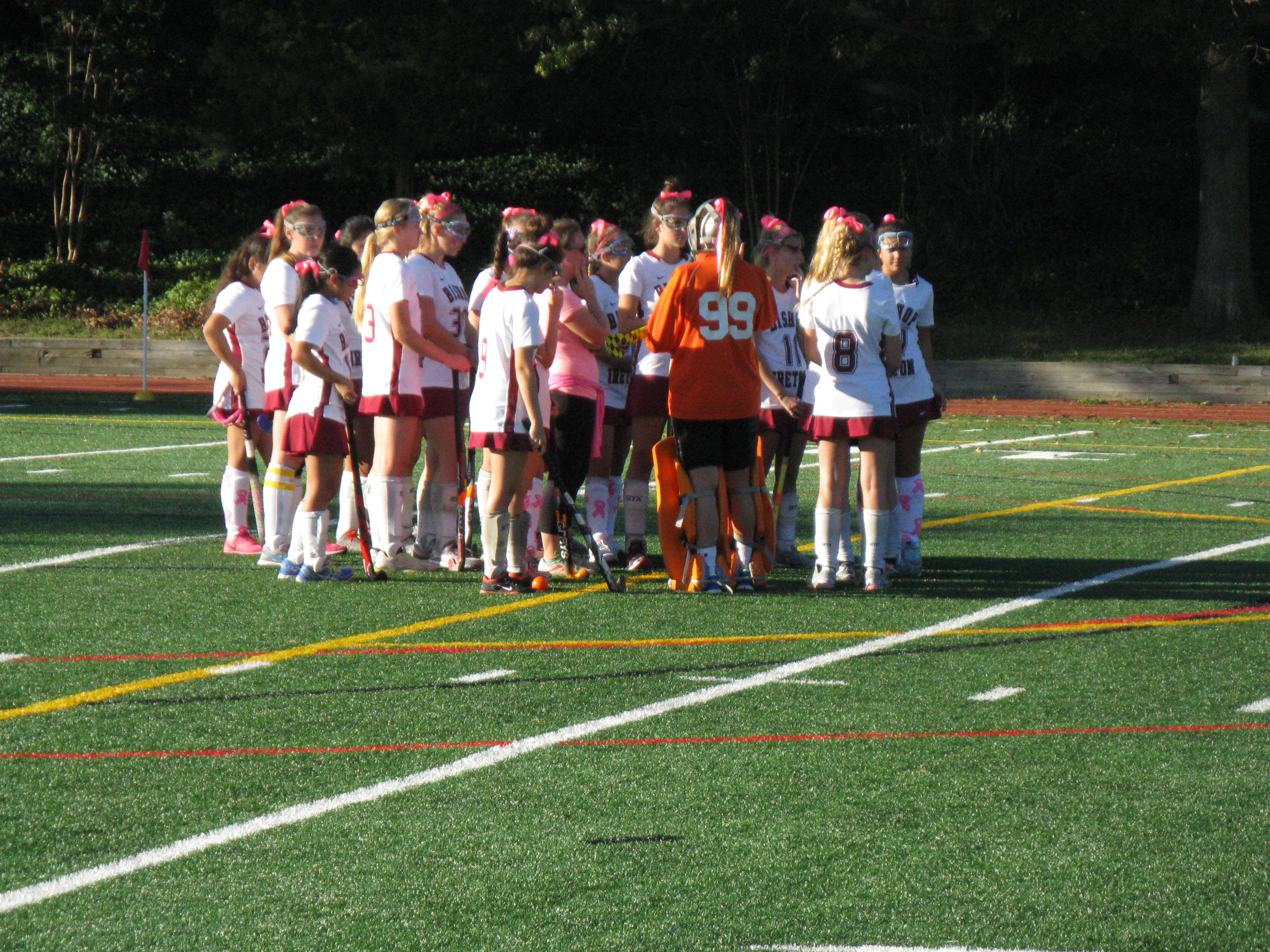 The Washington Catholic Athletic Conference is packed with strong field hockey teams of similar ability and skill, and that strength was apparent Monday afternoon as Bishop Ireton and Holy Cross played out an absorbing and physical game at Fannon Field.

The Tartans ended up defeating Ireton by a margin of 2-1, as Cardinal Callan McCormick’s penalty stroke in the first half was not enough to prevent the visitors from picking up the victory. In spite of the loss and a 4-2 record overall, the Cardinals stay in the No. 3 spot in the WCAC regular season standings, behind Good Counsel and St. John’s College.

Having finished in fifth place in the last two regular seasons only to lose in the first round of the playoffs, Ireton coaches and players are hopeful they can do even better in 2015 as the postseason moves ever closer.

“We’re going to end up in that No. 3 or No. 4 spot I think, hopefully higher if we beat Good Counsel,” said Cardinals head coach Erin Simons after the game. “I feel like if we beat Good Counsel we’re in a really good position, and we have played all the WCAC schools very tight. We [lost to] St. John’s 2-1, [Holy Cross] 2-1, so I think the WCAC is up for grabs in all areas.”

Simons’ confidence comes after some encouraging results, including a 6-1 mauling of Bishop O’Connell away from home and a 3-0 victory over St. Mary’s Ryken on their home field. Those results have been enough to propel Ireton to No. 9 in the most recent state poll. The game against Good Counsel followed Wednesday, after the Times’ print deadline.

But things were not quite so easy against a Holy Cross team that looked to play at a fast tempo and stretch the field on the counter attack.

It was a strategy that served the visitors well initially, and they took the lead with just over 12 minutes played in the first half after a short corner was not cleared by the Ireton defenders. McCormick’s penalty stroke tied the score at halftime, as the home side looked better offensively, with Grace Fletcher proving to be a thorn in the Tartans’ side when she had the ball in attack.

Despite some good momentum early in the second half, the Tartans held out defensively and punish Ireton’s inability to execute in front of goal, scoring again with just over 10 minutes until the final whistle. Throughout, both sets of players were willing to put their bodies on the line both in their use of speed and strength, something Simons said is in keeping with a highly competitive WCAC.

As the minutes ticked by, the players on the sideline got more involved, urged on by a healthy smattering of spectators at Fannon Field who generated an intense atmosphere. Simons said that perhaps her players became a little too affected by the moment, undermining their efforts to draw even a second time.

“I felt like when everybody else was getting pumped up and hyped up, we normally don’t play up to that, we usually keep our composure,” she said. “I feel like that might have been the missing link in this loss. Keeping our composure is something that is very hard because everyone gets involved in the play and it’s so competitive that we need to bring it down and rethink and go back to our strategies.”

In spite of the defeat, Simons said she is hopeful of continued success for the Cardinals in what will likely be tough games in the rest of their conference slate. She said her senior-heavy roster should make the difference, especially when it comes to the postseason.

“This is a great group of 12 seniors, all with lots of leadership,” Simons said. “It’s going to be very hard losing them. But the good thing is that they play like seniors. They play up to their maturity level, and they hustle.”

Coming off of the loss, Ireton knows there are plenty of things to improve upon, especially after an offensive performance in which they looked dominant but failed to get the ball in the net. For Simons, translating that dominance into shots on goal is key moving forward.

“I think we need to execute in the [penalty] circle,” she said. “Executing in the circle is the one thing that we’re missing. I think the defense is very strong; I think we’re patient, and we channel very well but we just need to execute.”