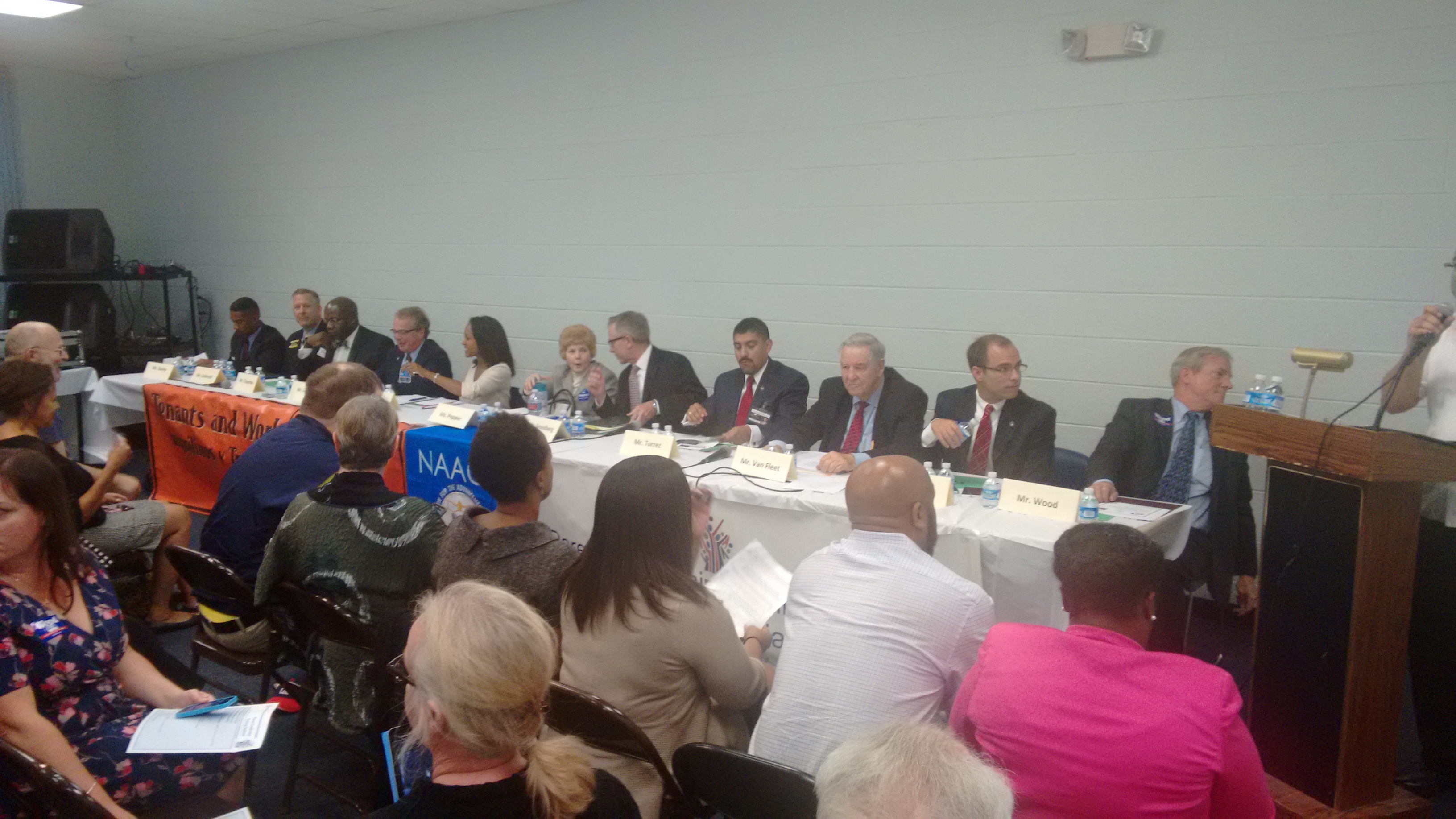 After some relatively placid affairs, the latest city council candidate forum had a different feel Tuesday night, as the organizers mixed up the format and saw some surprising results.

Sponsored by Tenants and Workers United, the Alexandria NAACP and the Parent Leadership Training Institute, the forum welcomed all 11 candidates for council to the Cora Kelly Recreation Center in Arlandria, with Canek Aguirre acting as moderator and Spanish language interpretation provided via headset.

After the candidates’ opening statements, things moved quickly. Instead of asking open-ended questions designed to elicit long answers from candidates, a number of so-called “lightning round” questions were sprinkled throughout, with candidates encouraged to hold cards answering yes or no to each.

Some questions received unanimous support: whether the city should require a displacement analysis as part of the approval process for redeveloping properties with 40 or more affordable housing units; whether funding should be increased for pre-K; whether Alexandria City Public Schools and the Alexandria Police Department should inform students of their legal rights when stopped by police officers; if the public should be able to track data on arrests to see discern potential racial bias; and a one-year pilot program to provide child care during city council hearings.

But others proved to be more contentious. Wood, Van Fleet and Cefaratti all said the city should not support a resolution encouraging the state legislature to ask the Virginia Department of Motor Vehicles to issue identification cards and drivers’ licenses regardless of an applicant’s immigration status. Miles, Smedberg and Torrez said Alexandria should not provide matching funds to help residents with application fees for permanent legal status, while Wood abstained.

Wilson, Smedberg and Lovain all said no to the idea of the city re-establishing the 1-cent set-aside for affordable housing. Wood abstained on whether he would support a $20 million expansion project at the T.C. Williams Minnie Howard campus, while Miles held up both “Yes” and “No” cards to indicate being undecided. Wood abstained again on whether low-income users should be on panels to evaluate the use of grants from the Fund for Human Services.

The rapid-fire questions didn’t mean voters weren’t able to hear some longer answers on other issues, including the city’s dwindling affordable housing stock. All agreed that something must be done, but candidates laid out a number of different possible solutions.

Chapman repeated his belief that affordable units should be built into municipal buildings, and that the number of units managed by the Alexandria Redevelopment and Housing Authority should be expanded. Both Lovain and Wilson said the city’s land-use and zoning authorities could prove useful, and remain one of the most effective things at the city’s disposal.

“The city has a lot of tools in the toolbox when it comes to affordable housing, and it needs to use them all,” Lovain said.

Several candidates said officials must be more aggressive with developers when negotiating the number of affordable units in new projects, while Pepper suggested partnering with nonprofit and for-profit organizations could be beneficial.

“We need to be negotiating hard … we can’t force them, but we can ask them,” said Miles.

The redevelopment resulted in the temporary loss of 2,475 apartments rented mostly by those with low or medium incomes, with half of the existing units set to be demolished over the next 30 years and replaced by 5,000 new apartments, townhouses and condominiums. Within that, the city negotiated an agreement that 800 new or existing apartments will be made affordable.

The candidates also were asked their one main initiative if they are elected, with answers as varied as universal pre-K, expanding the commercial tax base and Van Fleet’s assertion that the city must reduce its debt service.

To close things out, they were asked how to reduce inequality and improve civic engagement. Several suggested hiring more bilingual staff and providing information in multiple languages, while Torrez said increasing diversity among city councilors would give others something to aspire to. Chapman argued mimicking D.C.’s use of Advisory Neighborhood Commissions might be an effective way to engage more people in the process.

Both Wilson and Bailey repeated their idea that education is the most important aspect when it comes to reducing inequality and improving civic engagement, with Bailey receiving rapturous applause from those present as he spoke about investing early in children’s lives, or else being forced to invest later on if they are incarcerated as adults.

“If we don’t give them the tools to succeed, they won’t succeed,” he said.

Lovain took a swipe at several of his fellow candidates, saying he would like to see the city continue to not keep checking the immigration status of people who want city services, a position he claimed others disagreed with.

The candidates suit up for another forum tonight at 7 p.m. at George Washington Middle School, with a final showdown slated for 7 p.m. on October 14 at the Nannie J. Lee Center.