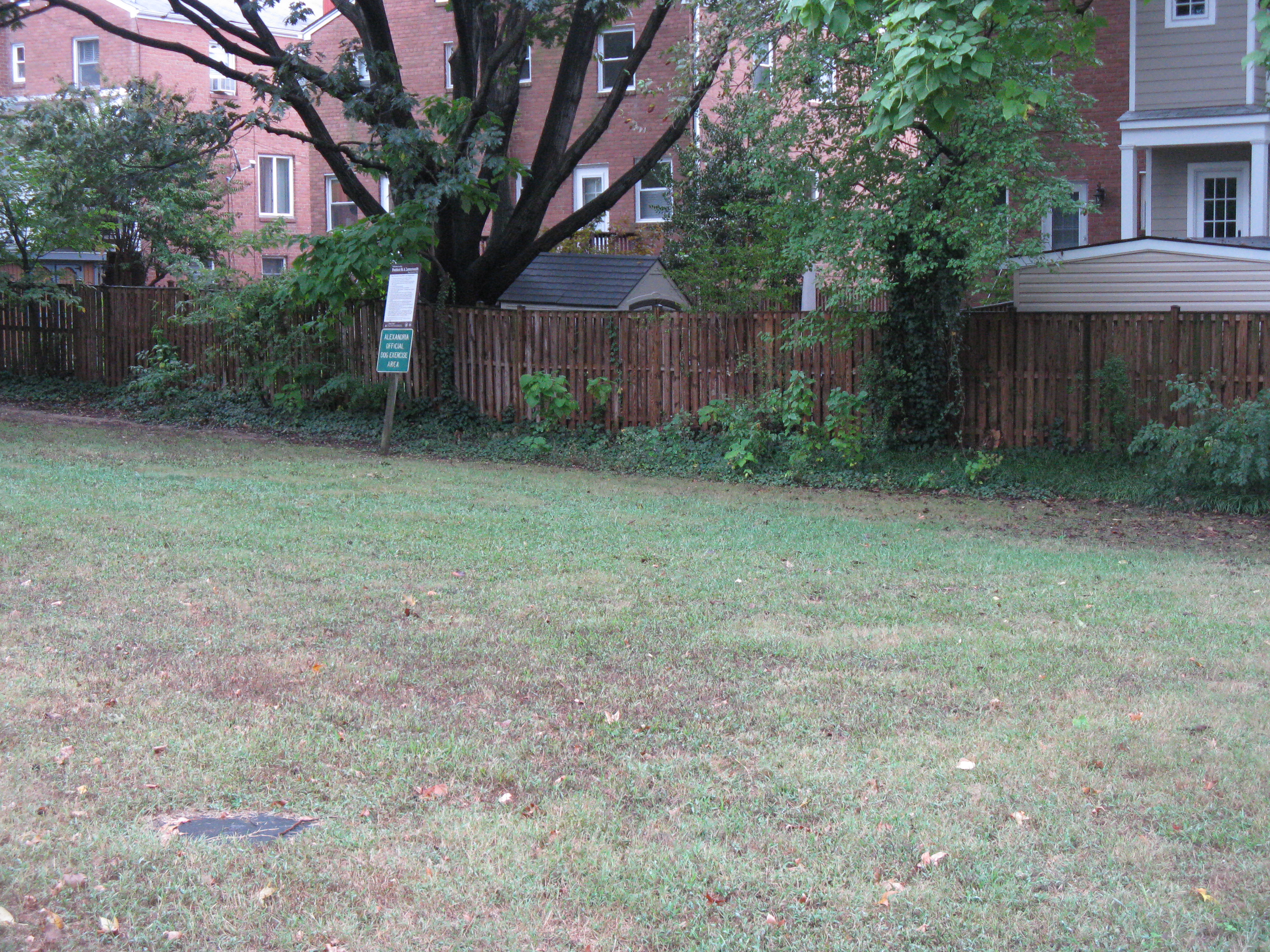 The city’s parks and recreation commission said it has heard a number of concerns over the past few months from residents about the safety of dogs, pedestrians, drivers and cyclists around unfenced dog areas, and late last month acted on those concerns in three areas.

After a public consultation process and hearing in August, the commission recommended de-designating unfenced dog parks on Fort Williams Parkway at Dearborn Place and at the intersection of West Timberbranch Parkway and Parkway Terrace. Designation of a public space as a dog park means owners can allow dogs to run off leash.

The status of a third unfenced dog park at the intersection of Braddock Road and Commonwealth Avenue is slated for review in the city’s planning process for pocket parks later this year.

The recommendations come following concerns about safety, especially at the Braddock Road and Commonwealth Avenue location, which is at one of the busier intersections in Alexandria and with no barrier to protect it from oncoming traffic. This intersection is also where pedestrian Deborah Ann Bogart was struck and killed by a hit-and-run driver on September 3.

“When there is no border between an unleashed area and the road, there is the potential for dogs to run out into the road, which would result in injury to the dog or could result in injury to people, either dogs running into bicycles or chasing after bicyclists or pedestrians or cars or bikes swerving to avoid hitting a dog and thereby hitting something else or creating some other unsafe situation in that way,” parks and recreation commission chairwoman Jennifer Atkins said. “Where an unleashed area is protected and there’s a border, even though there’s not a fence there’s a natural separation between the dog area and the street, or even where it borders the street but the street is not that busy, those safety concerns aren’t nearly as prominent because there’s something keeping the dogs from running out into the street or there’s really no traffic there to worry about.”

The commission examined the issue of unfenced areas as they relate to the city’s dog park master plan, approved by city council in 2000 and revised in 2011. The plan stipulates that for a dog park to be considered for fencing, it must be at least 21,789 square feet in size, and there must be what the master plan calls “landscaping and buffers” around the perimeter.

The small size of all three currently unfenced dog areas made it impossible to designate them for fencing without a specific deviation.

Atkins said the park at Braddock Road and Commonwealth Avenue generated the most discussion at the public hearing, and the decision to include it with the city’s pocket park planning process means citizens and neighbors will get even more of a say on how it is used going forward, be it as a dog park or some other form.

“The neighbors really love that park; they said that they use it, which is great,” she said. “I think that some members of the commission still have some safety concerns about that intersection. As we all know it’s a pretty heavily trafficked intersection and can be quite dangerous.

“We thought if that gets rolled into the pocket park planning process, then the neighborhood really does have the ability to come and say whether or not they think there should be some kind of barrier, maybe some plantings or something, but that also can be considered in the larger context of the intersection and everything that’s going on around it as it actually gets planned.”

Meanwhile, the other two parks no longer will allow dogs off leash, with a view to including them in an eventual planning process in conjunction with adjacent open spaces. But the commission removed the off-leash designation as a short-term measure, since that process is not set to start until 2016 at the earliest.

“They’re both somewhat adjacent to natural spaces, and so the idea is those natural spaces will be part of a planning process — I want to say it’s another year or two years,” Atkins said. “And when that planning process happens, then it can get considered as part of the whole larger natural area and the community can have input on how those areas ought to be used.”

The commission’s recommendations require city council’s approval, and the body may choose to revisit the dog park master plan as a whole. In light of the recent developments, officials said that neighborhoods have changed since 2000, so the nearby parks may need to adapt.

“The dog park master plan was put into place 15 years ago, and so a lot of those places, the traffic patterns at those places have changed a lot,” Atkins said. “And so it was an exercise in looking at and seeing whether the anecdotal concerns we’re hearing are shared by the public or not, how much are these places used.

“A lot of people were there from Old Town talking about the various Old Town dog parks, which really were not on the agenda at all, but it was good to see a nice turnout from the dog-loving community.”