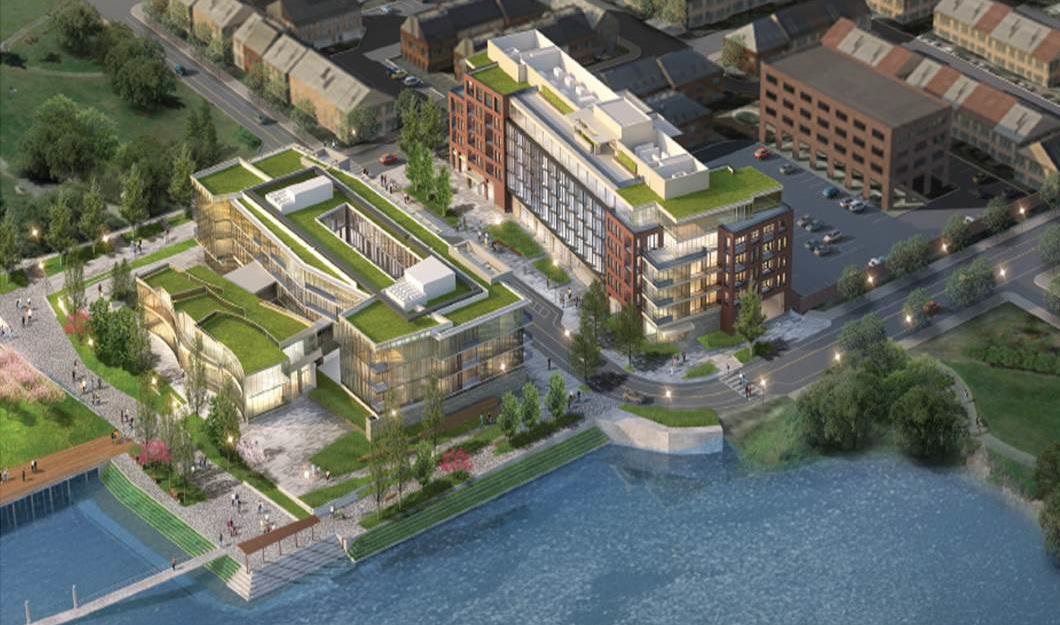 The redevelopment of Robinson Terminal North gained unanimous approval from city council at an October 17 hearing, marking the passage of the last of the main projects in the city’s waterfront plan.

Before the start of the public hearing, Euille disclosed that in the past he had received campaign donations from the developers of the project: CityInterests Inc. and Rooney Properties. But he said he did not feel there was a conflict of interest and so would be voting on the proposal.

Within the redevelopment project, Robinson Terminal North is slated to become home to 66 multi-family residential units, a 132-room hotel, 25,000 square feet of commercial space and four restaurants with a total mix of 500 indoor and outdoor seats. The new homes and hotel will be served by 260 off-street parking spaces, with the decision on whether residents will be able to apply for on-street parking spaces left up to city councilors.

When considering Robinson Terminal South’s redevelopment plan, councilors chose not to allow new residents to apply for on-street permits, pending final recommendations from the Old Town Area Parking Study work group, and they did the same for the northern neighbor. Many residents expressed concerns that an influx of cars might adversely affect an already congested waterfront.

“If this project is adequately parked, as it’s described by staff, then these people won’t need on-street parking,” said Yvonne Weight Callahan, president of the Old Town Civic Association. “If it is not adequately parked, they are going to get their parking permits and add to the mess.”

“If you’re not careful today, you can make a huge mistake that will increase Old Town parking congestion and bring festering resentments that will last for decades,” agreed Carolyn Merck, a resident of North Royal Street.

City Councilor Paul Smedberg echoed those concerns and the knock-on effect parking along the waterfront could have across the city. He said he was especially concerned about the spread of congestion as people go further and further looking for parking spots.

“All these things are ad hoc, and we’re really not attacking this holistically,” Smedberg said. “It does create an inequity; we’re just pushing the problem to other areas. Doing this ad hoc is not a good approach.”

The concerns about parking were also highlighted in discussion of the respective sizes of the four restaurants, which are expected to seat 500 people between them during the peak summer months inside and outside, but fewer during the colder months. But City Councilor Tim Lovain argued that a wide variety of transit options should prevent every patron driving to a restaurant, while Euille cited the recently opened Blackwall Hitch as an example of a waterfront restaurant to which people do not feel inclined to drive.

“The idea that everybody is going to drive to a restaurant just doesn’t correspond to experience,” Lovain said.

Vice Mayor Allison Silberberg said early in proceedings that the city must be aware of the lack of mass transit options near Robinson Terminal North, and how that can adversely affect things. She used Adams Morgan in D.C. as an example of a neighborhood poorly served by mass transit that can be overwhelmed by people driving and trying to park on the street.

“The fact is that a lot of folks will want to drive cars,” Silberberg said. “We can encourage mass transit, but this is an issue that we have to be cognizant of.”

To address the parking issue, city staff has previously suggested making use of valet parking at garages, although both city councilors and members of the public remain skeptical about the viability of that plan.

Councilors and staff promised to look into the concerns raised regarding the removal of contaminated soil and ensuring everything possible is done to remediate any environmental impact. Currently, the plan is for clean infill soil to be barged in, with removed soil to be transported away by truck, a process that Bill Skrabak of the city’s department of transportation and environmental services said would reduce what he called the “route of exposure” of any contaminated soil.

The 7-0 vote in favor of the project means council has approved all the major projects outlined in the controversial waterfront plan, initially adopted four years ago. But the various projects have become a focal point in the city’s local elections, as some candidates argued the development as out of character with the surrounding neighborhood.