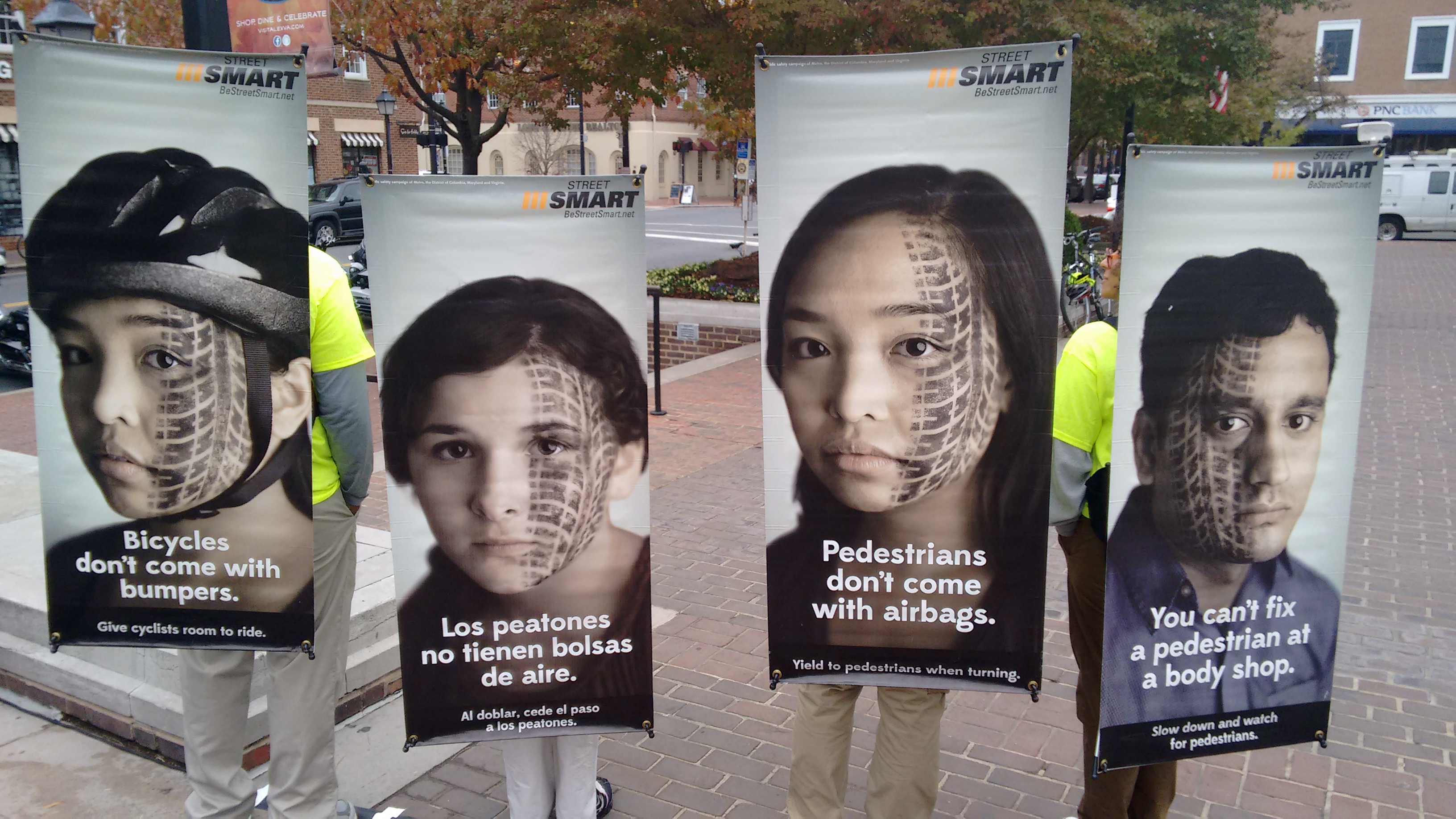 At the announcement of the Street Smart campaign for this fall at Market Square Tuesday morning, City Councilor Tim Lovain presented some startling statistics during his remarks.

It all points to a need for increased vigilance and safety on the region’s roads, and with that in mind the Metropolitan Washington Council of Governments launched its annual Street Smart campaign just in time for the end of Daylight Savings Time and the advent of an earlier dusk during the winter months.

The campaign will combine greater police enforcement of scofflaws across transportation modes — bicyclists, pedestrians and motorists — with a push that will see teams of young people holding billboards educating road users about the need for heightened safety. These teams will be posted at highly trafficked areas to hand out literature and answer questions about the campaign.

For Alexandria, the campaign comes on the back of the city’s Complete Streets initiative and significant investment in transportation infrastructure to enhance the safety of all users.

“It is fitting that we are here today in Old Town, which is one of the busiest areas in the region in terms of pedestrian, bicycle and automobile traffic, to launch this latest campaign,” said Mayor Bill Euille. “Safety for people walking and bicycling is a top priority in Alexandria and in the region. Since the city adopted a Complete Streets policy and funded a Complete Streets program in 2013, the city has installed over 20 miles of bike facilities, hundreds of high visibility crosswalks and rapid flash beacon technology at many locations where safety improvements were needed.

“This year, the city has taken quick action to make sure we are addressing pedestrian safety. Just last month, city council appropriated $200,000 to repair and improve our sidewalks.”

Lovain spoke of the importance of those upgrades, especially in how they naturally encourage motorists to slow down.

“These kind of improvements also serve as natural traffic-calming [measures], as when drivers see the sidewalks filled with people and crosswalks and bike lanes, they naturally slow down,” he said. “These engineering improvements go hand in hand with the enforcement and educational campaigns like Street Smart that remind pedestrians to cross streets safely and remind drivers to stop for pedestrians.”

On Monday, the city announced an increase in enforcement of traffic laws, with the Alexandria Police Department focusing on busy locations such as the areas around Metro stations during rush hour and the Union Street corridor in Old Town.

During that time, officers will issue citations to motorists, bicyclists and pedestrians for a number of violations, including running red lights and stop signs, blocking crosswalks, failing to yield right of way to pedestrians in crosswalks, making improper turns into crosswalks, failure to obey “No Turn On Red” signs, particularly while pedestrians are present, speeding and other infractions.

The effort comes alongside increased police presence in the rest of the region, something Lovain, also first vice chairman of the Transportation Planning Board, said is in keeping with the need to deal with safety on a regional basis.

“The Street Smart campaign was established as a regional effort because of the unique nature of our tri-state area,” he said. “We know it’s critical to combine the efforts and form a single campaign. In this region, our cities and states not only share transportation systems and a media market, we share people. Because of this, we all have to work together to make our region a safer place for people to walk and bike.”

“Combining our resources for more effectiveness and presenting this area’s population with a consistent safety message are both positive results of this joint campaign,” said Saunders. “The purpose of the Street Smart campaign is to combine high visibility enforcement and paid advertising, education and outreach to change the behavior of motorists. We also want to change the behavior of our pedestrians and bicyclists and ultimately our goal is to save lives.”

With fewer hours of sunlight on their way as winter closes in, officials hope the initiative will be effective in improving road safety. That is especially prevalent in D.C., where Mayor Muriel Bowser unveiled her Vision Zero Initiative, which aims for no fatalities or serious injuries to any users of D.C. transportation by 2024.

“Halloween is just around the corner,” said Greer Gillis, deputy director at the D.C. Department of Transportation. “Crossing the street should not have to be so scary.”

“This campaign is timely given that it is the most dangerous time of year,” said Euille. “Crashes involving pedestrians spike during the winter months with less daylight hours, so we are reminding people to be alert and obey safety laws as they drive, walk or bike in the region.”