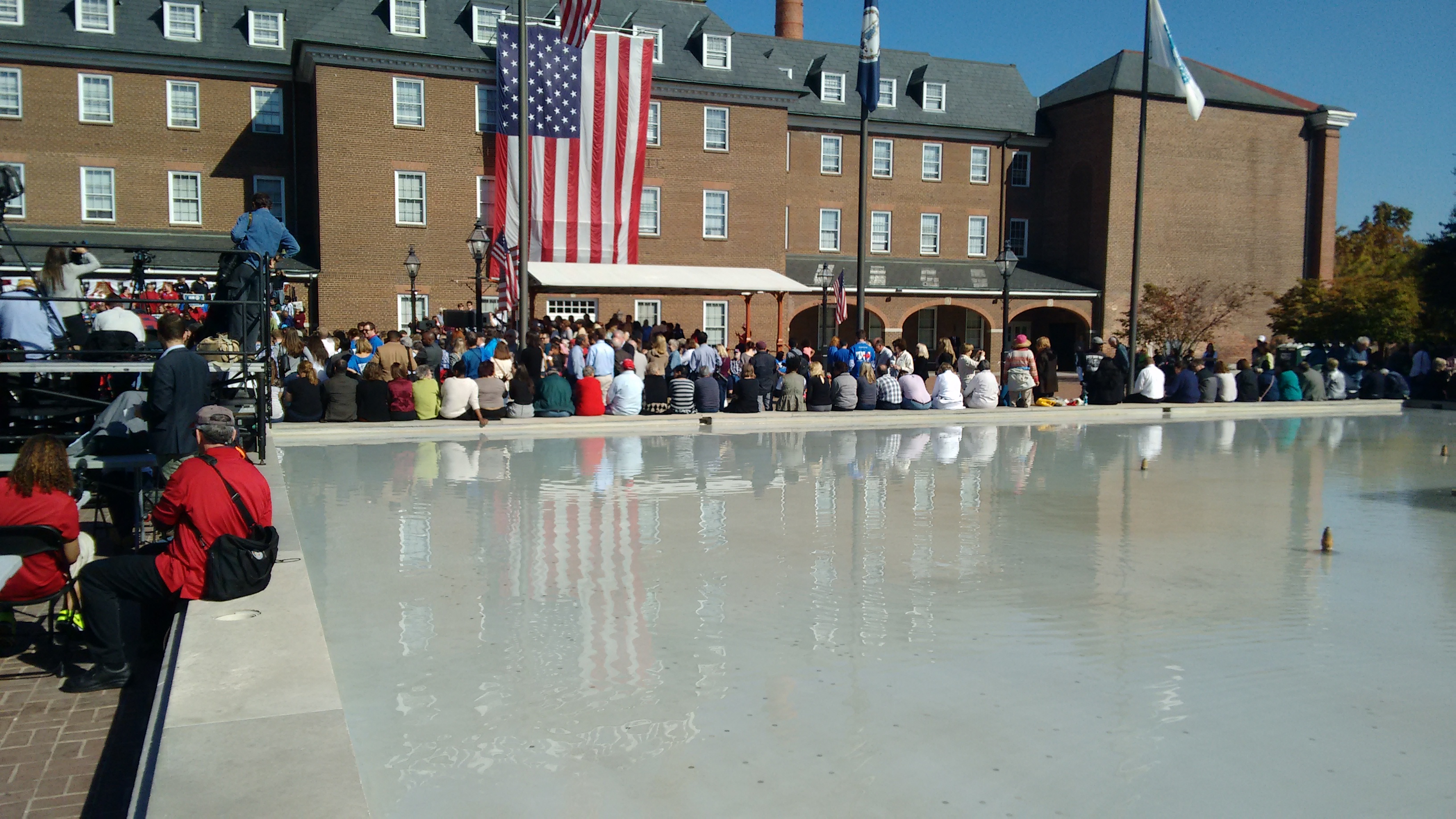 With the Port City gearing up for its own state and local elections on November 3, Democratic candidate Hillary Clinton joined Gov. Terry McAuliffe (D) outside City Hall for an event billed as a Northern Virginia “grassroots organizing meeting.”

Attended by around 3,000 people, it was a chance for Clinton to rally her supporters and take something of a victory lap after 11 hours of testimony the previous day before the House Select Committee on Benghazi at the U.S. Capitol. And although the long lines at security snaked out onto King Street and delayed the pair’s arrival on stage by nearly an hour, the crowd’s enthusiasm was undimmed as they outlined their progressive visions, implored supporters to vote and aimed several digs at their Republican counterparts.

“We know that Hillary is a fighter, and she’s been a fighter her whole life,” said McAuliffe. “We know that she gets things done for everybody. She has fought for children, for families her whole life. You want to talk about a fight, how about those 11 hours of testimony yesterday? … I almost want to thank her, because — you saw in those 11 hours of
testimony — you saw this is why she needs to be our commander in chief.”

McAuliffe went on to outline what he has accomplished since being elected in 2013, and said his record shows that electing progressive Democrats means “things actually happen.” He encouraged residents throughout Northern Virginia to vote in the elections for the Virginia General Assembly and shift the state senate to Democratic control.

With that, Clinton arrived at the microphone to deafening applause from attendees, many of whom chanted her name and waved signs and posters showing their support. She wasted little time in taking her Republican opponents to task, two of whom — Dr. Ben Carson and Carly Fiorina — have campaign headquarters in Alexandria.

“We’re facing a very stark choice,” she said. “Either we’re going to build on the progress we’ve made under President [Barack] Obama, or we’re going to give Republicans another chance to tear down everything we’ve worked so hard to build. Every election is about the future, and there’s a lot more work that has to be done.”

Clinton said she was running for herself and not any potential predecessors in the Oval Office, having begun her second presidential campaign officially in April after serving as first lady, U.S. secretary of state and a two-term U.S. senator from New York.

Over the course of her speech, Clinton outlined her platform to supporters, including across-the-board wage hikes, a plan to allow graduates to refinance student debt, introduce paid family leave for all, pass comprehensive immigration reform and reduce the pay gap between men and women. On that issue, she recalled being asked by a young girl at a town hall event in Nevada whether she, as a “girl president” would make as much as a “boy president.”

“People feel like after six and a half years of hard work and sacrifice, America is standing again,” she said. “But we’re not running it the way we should. … I’m running for president because after listening to people across the country, your fights are my fights, and I won’t quit until all Americans have a chance to get ahead and stay ahead again.

“A lot of things have been said about me, but ‘quitter’ isn’t one of them.”

Clinton also made mention of her desire to introduce stricter federal gun control measures, especially after the spate of shootings across the country. It was a message that has resonance in Alexandria, given the deaths in recent months of two men from gunshot wounds near the Braddock Road Metro station. She went on to make a stirring promise as her speech reached its climax.

“Here’s my promise to you: other candidates might be out there hurling insults at everyone, talking about what’s wrong with America, wanting to divide us,” she said. “I still believe there is nothing wrong with America that can’t be fixed by building on what’s right with America. Let’s together make sure our country is one where we lift each other up and leave no one behind.”

After a closing where she urged people to vote in the upcoming elections, the event was over and attendees swarmed out of the Market Square and back to their everyday lives. But for a moment, Alexandria found itself once again at the center of national politics.