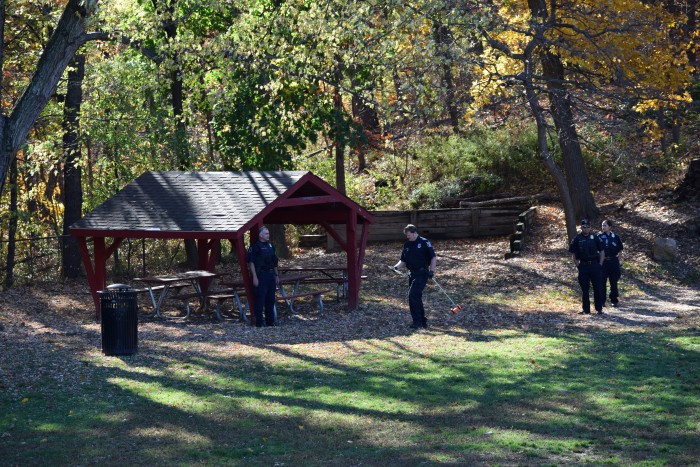 City police are investigating Alexandria’s third homicide of 2015 after a man was discovered dead in Beverley Park in the North Ridge neighborhood Monday morning.

The victim was identified Tuesday as Jose Luis Ferman Perez, a 24-year-old city resident who police said suffered from an “upper body trauma.” Police added that Perez did not live in the neighborhood. Officers responded to the area around 8 a.m. Monday to the park at the intersection of North Overlook and South Overlook drives and found him unresponsive.

As of press time, there were no further details about the nature of Perez’s death, any motive and there were no suspects under arrest or investigation. Police cordoned off the park, a popular destination for families, which is known in the neighborhood as “The Pit” for its sunken layout.

Alexandria Police Chief Earl Cook addressed a meeting of the North Ridge Civic Association Monday night to address neighbors’ concerns and assure them officers are doing everything they can to find those responsible.

“We don’t know a lot right now, and we never do in these kind of incidents,” he told residents at Beverley Hills Community United Methodist Church, adding that he did not have an answer as to whether the homicide took place in the park itself.

Cook declined to go into specifics on the nature of the killing, other than to repeat the police’s previous statement that the victim suffered from an “upper body trauma.” Several neighbors reported on social media that Perez had his throat cut, while one man at the meeting reported hearing that he had been beheaded. In an interview after the meeting, Cook did not give other details.

“It’s too early for us to discuss what that upper body trauma was,” he said. “There’s a lot of speculation as to what is the condition of the body. That might be an investigative point, but the main point is we have a young man who lost his life. The idea of what that looks like right now is less important than why they did it and who did it.”

In the meeting, Cook was asked whether the homicide was in any way related to the gang activity that once had been prevalent in Alexandria but has waned in recent years. The chief noted that the gang situation in North Ridge is “pretty stable,” something that attracted some laughs from the audience, but said that it could not be ruled out given the close proximity to Arlandria and other areas that have struggled with gang violence in the past.

“Alexandria has gang members residing here,” he said. “Fortunately, we keep a lot of the activity out of the city in terms of violence.”

After the meeting, Cook noted that the lack of information on a motive meant police were unable to determine whether gang violence played a role. Alexandria is home to members of a number of notorious gangs, including the Bloods, Crips and MS-13.

“We do not know whether or not any gang-related activity was associated with this death,” Cook told reporters. “We don’t know if any drug activity is associated, we have no motive as yet. Being this early, we wouldn’t know those things. Hopefully very quickly we’ll start getting a feel for the nature of what was going on in that park. Until that time, we don’t know.”

Cook also noted the relative stability of the North Ridge neighborhood, including the park, which he said has received only around three or four service calls since 2013, indicating what he said was a lack of trouble compared to other areas of the city.

“This is an extremely low-crime neighborhood,” Cook told reporters. “It’s very secluded in a way because it’s not a natural cut-through or any byways for any cut-throughs for traffic. Normally it’s just the neighbors there. To discover something like this is obviously shocking, obviously tragic that we’ve lost a life again here in the city of Alexandria.

“It is very unusual, so [there is a] natural fear about why this happened at this location. We don’t know yet why the persons who perpetrated this chose that neighborhood.”

In the meeting, the question was raised about improvements to the park, in particular adding lights or other security measures. Cook said the police department was keen to help upgrade and keep safe a “wonderful park to be here in your community,” and added that in the immediate aftermath of the homicide, patrols would be increased around the area.

He also encouraged residents to be vigilant and report any suspicious activity, both around the park and elsewhere.

“I say we go back to the tried and true crime prevention efforts we tell people all the time,” Cook told reporters. “A lot of people walk their dogs, a lot of people do other things with their children in the parks. Just be diligent about strangers, about people you don’t know. We suspect this happened in the late hours of the [night], so not normally when this community is out and about.”

The Alexandria Police Department asked that anyone with information about the incident contact Sergeant Sean Casey at 703-746-6853.