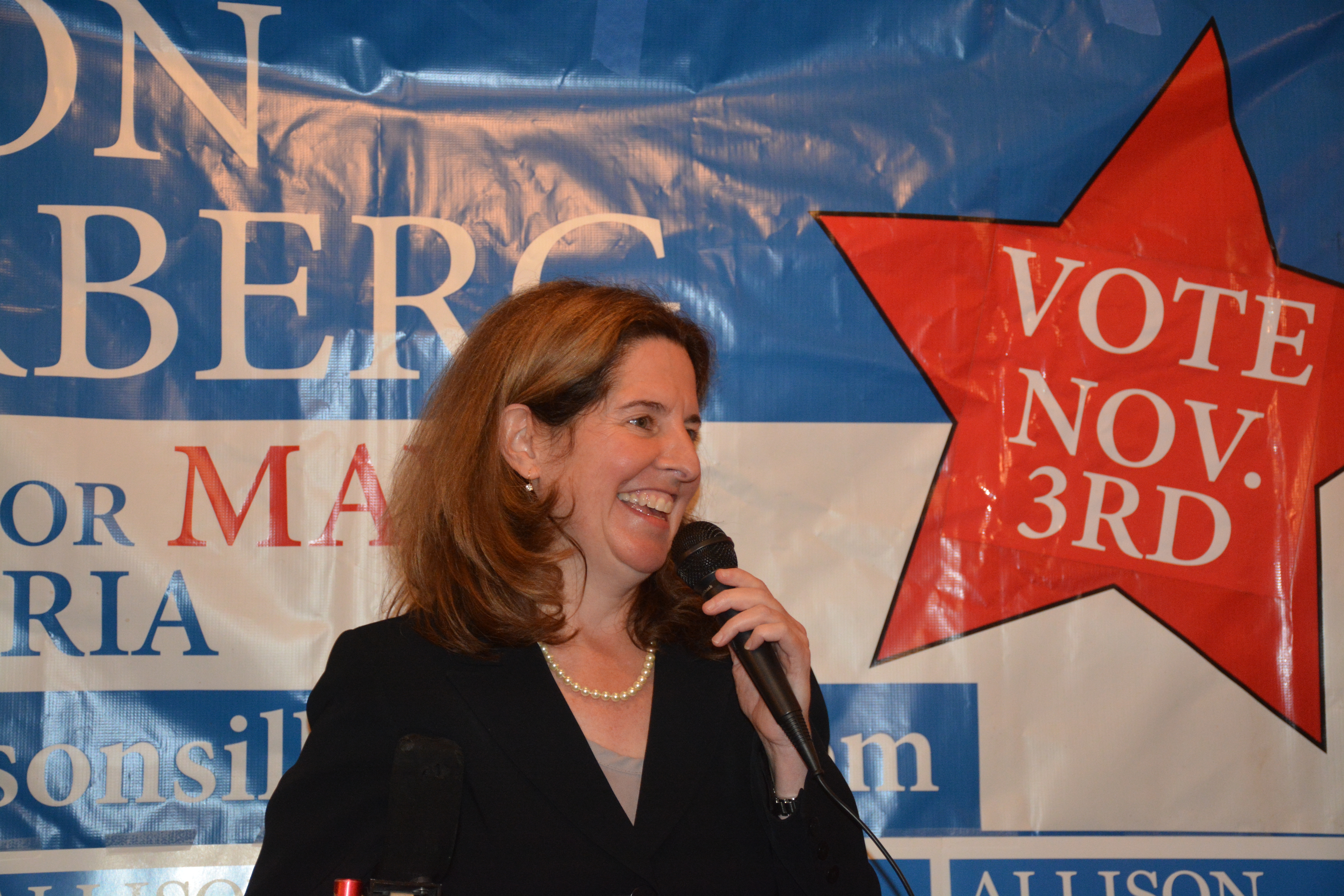 With all precincts reporting, Silberberg took 16,554 votes for 63 percent, ahead of all write-ins with 9,702 votes for 37 percent. She will be joined on the dais by all six of her Democratic colleagues, including City Councilor Justin Wilson, who will become the new vice mayor by virtue of his accruing the most votes of all 11 candidates at 15,815. Fellow incumbents Paul Smedberg, Del Pepper, John Chapman and Tim Lovain will be joined by Willie Bailey, who won his first ever race for office.

In the races for seats in the Virginia General Assembly, state Sen. Adam Ebbin (D-30) easily fought off a challenge from Independent Green candidate J. Ron Fisher, winning nearly 77 percent of the vote. Mark Levine, the Democratic candidate for delegate in District 45, was unopposed and won 95 percent of the vote, while Delegate Charniele Herring (D-46) defeated Republican Sean Lenehan with 67 percent of ballots cast.

At her election night party at Los Tios on Mount Vernon Avenue, Silberberg called the result a “new day” for Alexandria, to raucous applause. Euille, meanwhile, spent his election night at his headquarters on North Fairfax Street at an event campaign manager Eric Williams said was an opportunity to thank his supporters and campaign workers rather than purely focus on the outcome.

“We were outgunned, outmanned and out-financed, but the numbers tonight are unbelievable,” Silberberg told her supporters. “I’m extremely grateful for the city’s support. It is a new day and a time for change, and that’s what voters said across the city. We have a shared sense of purpose that I will stand for going forward.”

The two met at the Democrats’ celebration at Pork Barrel BBQ on Mount Vernon Avenue, where Euille conceded and congratulated the vice mayor on her win. The candidates hugged, and then each city councilor hugged the four-term mayor in turn.

“I said I wouldn’t cry,” Euille said, holding back tears. “But this is a family, and it’s all about love and respect. I want to congratulate Allison on an excellent, outstanding campaign, and my support will be there for her and for all of council always.

“I will work with the mayor-elect to ensure a smooth transition so that the city can continue to move forward.”

Sheriff Dana Lawhorne said in an interview that although he supported Silberberg in the mayoral race, this year’s election should not tarnish Euille’s strong legacy at the city’s helm.

“Bill Euille has been good for our city and has served us well,” Lawhorne said. “Nobody can take that away from him. Allison won the election and it’s time for us to move forward, but he served with honor and we are all appreciative of that.”

So why did Democrats sweep the council elections, despite expectations of an anti-incumbent sentiment? According to Dak Hardwick, a longtime political insider and former chairman of the Alexandria Democratic Committee, it might have been Euille’s write-in effort.

“You’ve essentially got two Democrats running [for mayor], and they’re both hitting hardcore Democratic voters and informing them about the election,” he said. “That naturally drove up Democratic turnout. I thought the write-in effort might drive up Republican turnout, but the opposite happened.”

At the Democrats’ party, successful candidates took turns thanking supporters, passing a broom from speaker to speaker to celebrate sweeping the local election.

“We did it,” shouted Chapman. “We showed that folks who are ill-prepared do not get a chance to lead this city.”

“We heard mistruths, and we responded with facts. We heard pessimism and responded with optimism,” Wilson said. “We knew that when presented with doomsday scenarios, voters will turn out to endorse those with a positive vision for this city every day.”

And Bailey expressed gratitude for all who encouraged him to run for office.

“Wow,” he told supporters. “Growing up in Del Ray, when it was probably a little bit rougher of a neighborhood than it is today, I never knew that I would be able to have the opportunity to give back to the city that has done so much for me.”

Meanwhile, the mood at the Republicans’ election night party at Daniel O’Connell’s was initially optimistic, especially as the first precinct — City Hall — came through with Bob Wood leading the way followed by his Republican colleagues. But the mood soured quickly as results from the other 27 precincts rolled in, with both Wood and Monique Miles managing to get more than 11,000 votes but still finishing behind Bailey and the other Democrats.

Wood said he may not run for city council in future years, although he was proud of his effort this campaign.

“I’m very proud of the campaign we ran,” he said. “I’m pleased with the representation that we had across the city across party lines. I think there was a true vote for change, but it wasn’t enough to overcome the Democratic machine that runs this city.

“[I] haven’t made that decision [to run again], but there’s other things to do. I love this city and maybe there’s other ways to serve, but this isn’t something you put your family through too many times.”