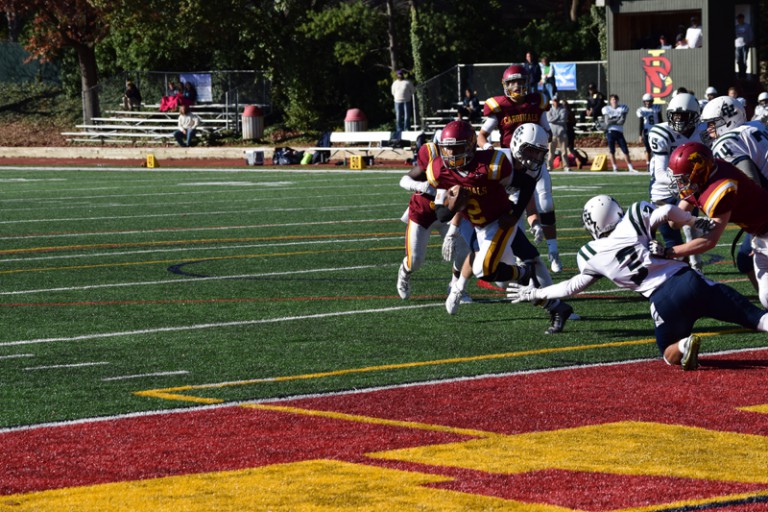 The last time Bishop Ireton faced Flint Hill on the football field, on October 10, the Cardinals recovered from a 20-3 deficit at halftime to win 24-23 away from home.

Just over a month later, there was no need for a comeback in the Virginia Independent Schools Athletic Association semifinals, as the No. 2-seeded Ireton beat the No. 3 Huskies 43-20 at a sunny Fannon Field on November 14 to advance to the final for the second straight year.

The victory owed much to the efforts of junior running back Perris Jones, who ran for four touchdowns and threw another — a 22-yard pass to Michael Everett in the second quarter that put the Cardinals up 14-7. Jones finished with 380 yards overall, including 279 rushing yards on 21 carries.

“The best thing I can tell you is he’s a better young man than he is a football player,” added head coach Tony Verducci. “It’s easy for everybody on this team to be excited for him and with him, and he appreciates everything and every opportunity that he gets and that makes it special for us as a team.”

Jones later hit Everett in the end zone to put Ireton ahead, and then the running back added his second rushing touchdown of the day from two yards out. When the halftime buzzer sounded, the home side was up 21-7.

After the break, Jones tallied his third rushing touchdown of the day from 14 yards out, and then before the end of the third quarter he capped a stellar performance with a superb 68-yard touchdown run. With a successful two-point conversion, it stretched the hosts’ advantage to 36-13, having seen Houston rush for another touchdown for the visitors.

In the fourth quarter, Houston completed a memorable individual performance as he powered home his third rushing touchdown, but the Cardinals offense had the last word as backup quarterback Chandler Wilder found wide receiver Harrison Mertins in the end zone for an 11-yard touchdown.

Ireton was delighted with the offensive output, not just from Jones but also from starting quarterback Venable and his battery of receivers. The junior went 8-12 with 129 passing yards and also rushed for 24 yards.

“I think this is probably the best that we’ve played all season in stringing together consecutive possessions and driving it down the field,” said senior wide receiver Ryan Verducci after the game.

“Everybody’s saying, ‘We’ve got to win, we’ve got to do this, this is my job, I’ve got to do my job, you do your job,’” said Jones. “We’re a pretty strong unit, and everybody’s playing for one another.”

The Cardinals defense struggled at times, as Huskies quarterback Justin Saleh connected well with his wide receivers, especially Gage Herdman, and ran well out of the pocket. Even with all these weapons against them, and Houston’s stellar performance, the home side felt it handled the situation well.

“From our end it was really about being disciplined,” said Tony Verducci. “We talked all week long about doing our jobs, not feeling as though you have got to make a play 10 yards away from where you’re lined up. Control your part of the line of scrimmage and we’ll be OK. I think we played very well together as a defensive unit.”

The Cardinals will once again face Richmond-based powerhouse Benedictine away from home in Saturday’s state final, after the No. 1 Cadets rolled past No. 3 John Paul the Great 42-0 in the other semifinal. Last year, Ireton lost 23-7 in the championship game, and went down 49-0 to the same opponent away from home earlier this season.

Despite what appear to be long odds, the Cardinals are hopeful they can bring a state championship to Alexandria.

“We’re not content making the trip to Richmond, we want to go and win,” said Tony Verducci. “We know they’re an incredibly talented opponent, and the bottom line is we have to play 48 outstanding minutes on our end to have the opportunity to compete and beat them.”

“I think it’s just all about how we think about things,” said Jones. “We’ve got to go into the game knowing that we can win. We’re confident. We can move the ball on these guys; we can do whatever we want to. We just have to execute, and that’ll be it.”