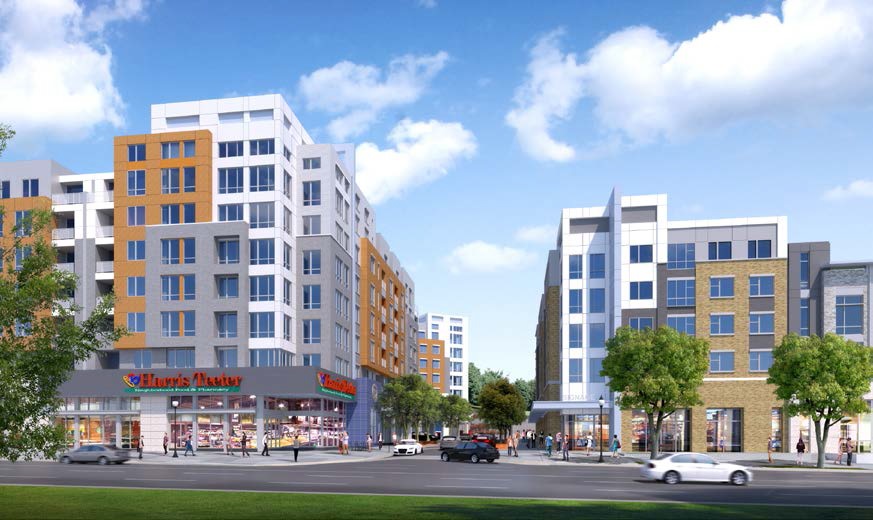 The Gateway project at King and Beauregard streets received unanimous approval from city council at a November 14 public hearing, as officials hope the mix of residential, office and retail units anchored by a 24-hour Harris Teeter grocery store will kick-start development along the city’s border with Fairfax and Arlington counties.

Of the 352 new residential units to be built, 74 will be affordable and contained in a mixed-use building that includes both retail and office space, with the possibility of adding more in the future. The building will be between three and five stories — about 60 feet — tall, with eight units designed to be accessible for residents with disabilities.

A loan from the city of up to $5.5 million was requested by the Alexandria Housing Development Corp., or AHDC, for the affordable housing aspect of the project, which would subsidize the units by around $74,000 each, and received unanimous approval from council along with the overall project.

Residents whose income is between 40 and 60 percent of the area median income, as defined annually by the U.S. Department of Housing and Urban Development, will be eligible to live in the new units, which will feature amenities like a children’s playground, a community meeting room and an on-site management office. The new dwellings also will be right in the thick of The Gateway development, close to the jobs, improved transportation links and amenities it is slated to bring, planning officials said.

“We’re really achieving deep levels of affordability, and the project’s proximity to Beauregard means this will be another affordable housing resource very close to that area,” said Helen McIlvaine, the city’s director of housing, in a presentation by city staff. McIlvaine also noted the plan’s compatibility with the city’s housing master plan, which calls for the inclusion of affordable housing within mixed-use developments.

In addition, city staff noted the willingness by the developer, Abramson Properties, to donate $300,000 to the city’s housing trust fund. Vice Mayor Allison Silberberg praised the donation and the commitment of affordable units as a “great step in the right direction.”

“I think we were fortunate to have an applicant who was very willing to be a part of [providing affordable housing], and I think that’s ended up with a really, really exciting result and one I think we’re going to study and want to replicate elsewhere,” said City Councilor Justin Wilson.

AHDC will finance, develop and own the property, which will also include approximately 35,000 square feet of retail space and 22,500 square feet of office space. The residential units will be equipped with Energy Star kitchen appliance packages and high-efficiency individually controlled air-conditioning systems. A report by the organization says the homes’ pricing is perfect for the needs of citizens.

“AHDC believes the proposed unit and affordability mix will assist those households in the city that are the most in need, while at the same time maximizing scoring opportunities provided in the Virginia qualified action plan,” it reads. “When combined with the market rate product anticipated with this development, the addition of the AHDC’s project will create a true mixed income, mixed use community.”

The city will provide the loan using the Housing Opportunities Fund and will include $3.5 million from the set-aside for Beauregard units. The fund will then be refreshed by future developer contributions, something City Councilor Del Pepper said “sounds like a plan.”

The city’s commission on aging also offered strong support for the 74 units of affordable housing in a letter to city council dated November 13 and signed by vice-chairman Robert C. Eiffert.

“The need for more affordable housing is evidenced by the loss of two-thirds of the market-rate affordable housing units in Alexandria since 2000, according to the annual apartment rent surveys conducted by the city’s office of housing,” the letter reads. “The commission supports this modest addition of units in an excellent location. We applaud the inclusion of eight units that will be accessible, and we urge that the remaining units include universal
design.”

Despite the overall positivity, Jim Hurysz, a resident of Fairlington Villages, raised concerns that the jobs created by the new Harris Teeter and others in retail and restaurants would not pay enough or provide enough hours to make living nearby financially feasible.

But other residents disagreed, and both the project and the city loan for its affordable housing component passed unanimously, with the area now designated as a revitalization zone.

“This is an improvement to an area that frankly is kind of an embarrassment for an entrance to the city of Alexandria and to our community,” said Guy Land, president of the Fairlington Citizens Association. “It has been crying out for improvement ever since the Jefferson [Memorial] Hospital closed.”