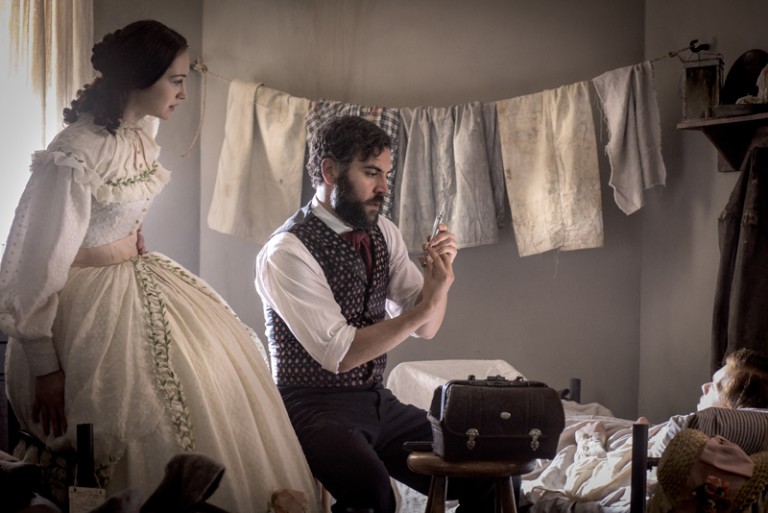 Tonight, the Alexandria Film Festival and Visit Alexandria will host the premiere of PBS Masterpiece Theatre’s new Civil War-era miniseries, “Mercy Street.” Based on a true story and set in Alexandria, the drama portrays love, war and medicine on the home front. Ruled under Union occupation, Alexandria was once the melting pot of the region, filled with soldiers, civilians, female volunteers, doctors, the wounded from both sides, runaway and freed slaves, prostitutes, speculators and spies.

Lisa Quijano Wolfinger, who has written, produced and directed a wide range of genres, is the show’s co-producer. Her work includes the critically acclaimed three-hour docudrama special for the History Channel, “Desperate Crossing, The Untold Story of the Mayflower,” nominated for two Emmy Awards; the two-hour special, “Fire on the Mountain,” nominated for a news and documentary Emmy and awarded the CINE Masters Series award, and a slew of other acclaimed programs.

What initially drew you to focus on American history in your career?

That’s an interesting one. I was educated overseas, but I am American. I spent most of my school years in France and England so my focus was on European History. When I married and moved to the States, I realized I knew very little about American history, so I began working my way up to it through a number of historic documentaries. For “Mercy Street,” I looked into the Civil War. It seemed like the next step for me.

I was especially drawn to the female side. I wanted to find a fresh window and I discovered a very interesting time about the medical side of the war that had never been told. It’s a crucible in many ways. It’s what I like to call the beginning of modern medical science.

Why did you want to tell this particular story?

What excited me most of all were these very daring female volunteers who were the first nurses coming into this conflict, trying to make a difference. Audrey Davis, director of the Alexandria Black History Museum, gave historical background on Alexandria’s early African-American experience.

What did she share with your other advisors and what intrigued you the most about the city’s history?

When I settled on the medical side of it, I realized I had to focus on the story rather than the battles. I started looking into general hospitals behind the front lines. I stumbled on a story about Mansion House, about a hotel turned Union hospital in Alexandria. It was the story of Mr. Green, a local entrepreneur, who built this hotel on his front lawn. Through that angle, I realized that the Green family stayed in town during the war living side by side with the Union occupiers. It gave me a family saga with the Greens and a medical story as well. The setting was so rich and rather unique in many ways.

There is an important and fascinating side to the story referencing women’s places in the medical profession. As a woman, was it important to you to include this?

Absolutely. That is the story I wanted to tell as a female filmmaker. It’s important to tell stories of remarkable women and what I loved about this story is that these are not iconic women — nobody has ever heard about them — and yet they are based on real characters who did extraordinary things.

Alexandria recently celebrated the war’s sesquicentennial, but there is still controversy over a statue at Prince and Washington streets commemorating local Confederate volunteers. How are the relationships between the Union soldiers and Confederate sympathizers expressed in “Mercy Street?”

We worked very hard to create a world where we represent different and points of view. We have unpleasant characters on both sides of the conflict and we don’t shy away from it. It was a very complicated time with brothers fighting brothers. James McPherson is one of our advisors, and in one of his notes he was concerned that we were romanticizing some of the Southern characters. But we have some very strong African-American characters with very strong voices.

Are there still Southern slaves in the city at this time? And how do they interact with the Union troops or freed slaves?

We dealt with that. Season One takes place in the spring of 1862 and the refugee slaves in Alexandria were protected by the Union Army and called contrabands, but they are not technically free. We have many different points of view including from the African-American perspective.

Who designed the costumes?

Amy Andrews Harrell, who lives in Richmond, designed and constructed many of them. With one dress she incorporated a fabric she found on eBay that came from somebody’s attic that dated back to 1860. She was able to build upon the costumes with authentic period lace and accessories and other fabrics. Amy is known for her work on “Lincoln” and “Cold Mountain” and many other period shows.

Is there anything you would like to say about the premiere in the city where it takes place?

We are very excited to show the film here in the city where it is set. It seems so fitting. The
actors are looking forward to coming down for it because they ingested the period by osmosis.