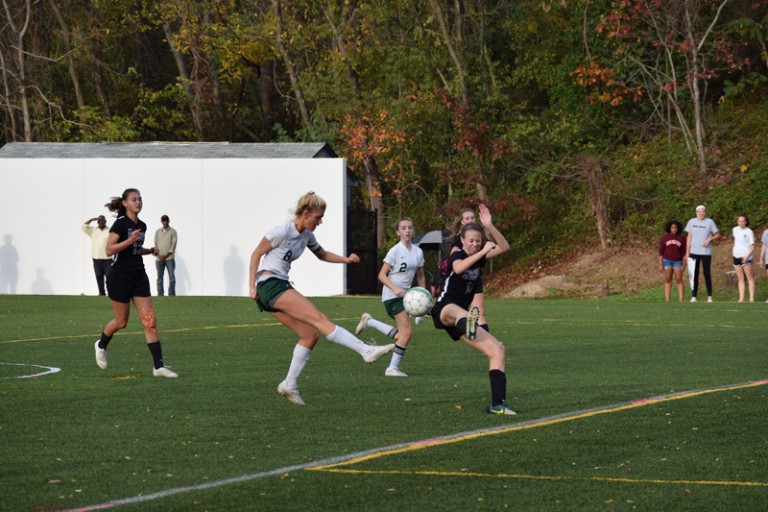 When Chris Arnold was appointed head coach of the St. Stephen’s and St. Agnes girls soccer team at the start of last season, his aim was to make them as dominant as the school’s girls lacrosse and field hockey programs, both of which are regional powerhouses that often are nationally ranked.

On Sunday, the program took an enormous step toward that goal, as the team won the Independent Schools League tournament with a 2-1 victory over Holy Child in the final, played on home turf at Kelleher Field. The Saints came into the ISL tournament with the No. 2 seed and had home advantage throughout.

The hosts went ahead after forward Elena Ricci headed home a cross from midfielder Anna Pusey, and SSSAS went into halftime leading 1-0. After the break, Holy Child was rewarded with an equalizer with 22 minutes left to give the home side some nerves. But just four minutes later, Caroline Curran scored the winning goal for the Saints, who managed to hold onto their one-goal advantage until the final whistle.

The victory in the final came just two days after a nail-biting 1-0 win on November 6 over local rival Episcopal in the semifinals, a game of high drama that both teams had several chances to win. The teams went to the sidelines scoreless at halftime, although the Saints enjoyed more possession and the better early chances. But after the break, the hosts finally got on the board.

With 29:21 left until the end of regulation and with the possibility of overtime and a penalty shootout looming, Ricci collected a long pass, and after shaking off the attentions of a Maroon defender, managed to slot the ball past the keeper and give her side the lead. And while the visitors pushed hard for an equalizer, the Saints’ defense held firm.

Those performances in the ISL tournament were indicative of an offensive unit that has gelled over the course of the season, which players said was thanks to a variety of factors.

“I think definitely our defenders are the ones to thank, because they would send the ball forward and get it out for us to get up there,” Ricci said after the semifinal. “Everybody had the right attitude to just keep pushing it forward.”

“Especially now at the end of the season, we’ve learned how to play with one another,” Pusey said. “I know where I can cross the ball and where someone can get it in, and I have a lot of trust in all the players up there. We’ve really come together. It’s amazing to think of ourselves at the beginning of the season versus now, because it’s extraordinary.”

In the competitive ISL, the Saints’ victory over Episcopal came just under a month after the teams’ meeting in conference play, which ended in a scoreless draw as part of the two schools’ Seminary Hill Cup series of games for the girls’ athletics teams. It was a result that the players said prepared them well for the postseason push that followed.

“They made a commitment to improve after that game, and they worked hard to do it,” Arnold said. “I think it’s all the players’ mentalities that made the difference.”

For the seniors on the roster, the tournament victory is quite a way to cap off their time with the program, with the Virginia Independent Schools Athletic Association state competition set to follow.

“This is such a big deal,” said senior captain Fionn Fortune. “We’ve been working for this since last year. That was our goal last year and we didn’t get there, so when the season ended we all came together and said we wanted to be in the final next year. That’s been the big picture for us for the whole year.”