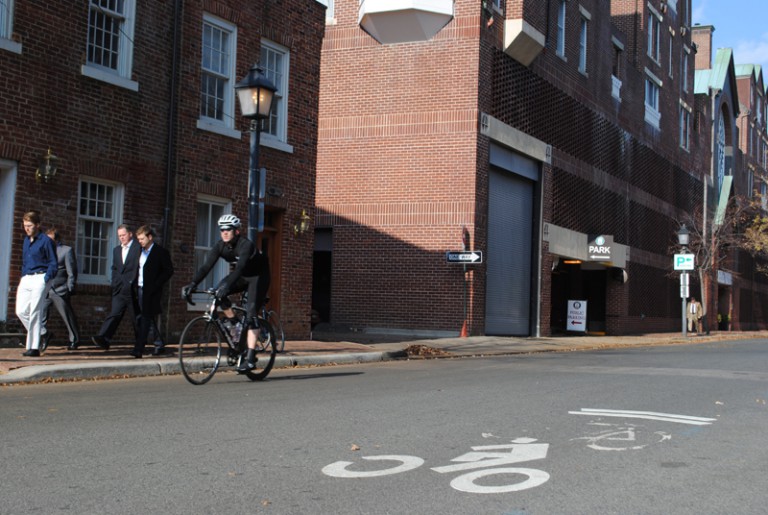 To the editor:
It’s rare to see a bicycle rider using the King Street bike lanes. To install these lanes, parking was removed, traffic lanes were narrowed and the bike lanes were painted green. The city is sweeping the lanes most weeks to keep them clean. And still the bike lanes remain empty 99.99 percent of the time.

City council voted to install these lanes in March 2014 despite objections from the city’s traffic and parking board and the safety and access concerns of many residents. As a concession, city council agreed to evaluate the results after 18 months or by November 2015. The question is: How do you define success for these bike lanes?

Consider that on Car Free Day, September 22, I counted a total of three bicycle riders during the morning rush hour (7 to 9 a.m.). One of these three rode on the sidewalk, while just two rode in the bike lanes. During the same time frame, there were a total of 1,999 motorized vehicles, including 73 buses and 34 trucks, yet, now, 30 percent of the roadway is allocated for bike lanes, leaving traffic lanes more narrow.

Consider also that some of the bike riders choose to ride on the sidewalk rather than in bike lanes beside the narrower traffic lanes used by 13,000 motorized vehicles per day. Consider the dangerous overlap of vehicles into the bike lanes documented by residents. Consider the bizarre design where separate bike lanes on both sides of King Street exist for only three blocks — riders must enter or exit traffic lanes before and after these three blocks.

The Complete Streets policy strives for safe transit of pedestrians, bicycles, mass transit and motorized vehicles through the city. It does not mandate separate bike lanes or corridors. It is not logical for the city to remove parking for residents or businesses because they decide it is not being used enough and replace it with bike lanes that are sparsely used.

Nor is it logical or safe to add separate bike lanes to narrow two-lane roadways, designed primarily for motorized vehicles, which are now at or over capacity.

Evaluating the King Street bike lanes based on real data (dimensions, configuration, usage, etc.), supports the decision to eliminate the three-block “bike lane island” on King Street. Implementation in the future should acknowledge and address actual constraints and concerns of affected residents and businesses and define criteria that must be met before installing bike lanes or corridors (versus sharrows).

These steps are critical, considering the draft map of the citywide bicycle network proposes miles and miles of new “enhanced bicycle corridors” throughout Alexandria.