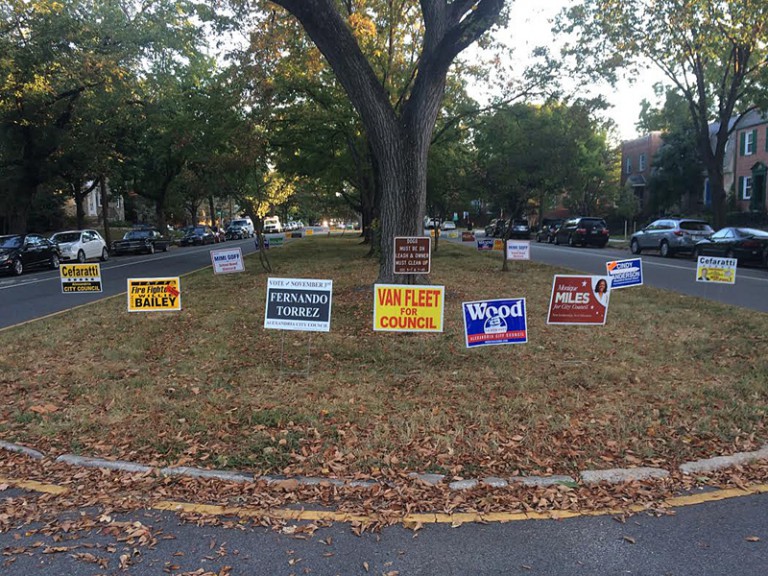 To the editor:
Once again, our beautiful city of Alexandria has been defaced by thousands of signs promoting candidates for mayor, city council, school board and the Virginia General Assembly.

These signs are everywhere — in the medians of streets, on parkland, on church and school grounds — anywhere that two metal wires can be shoved into the soil. One sign was wired to a traffic stop sign. Some candidates have placed signs in the yards of residents without seeking the owner’s permission.

This display is getting ridiculous. One candidate posted 16 signs within a one-block median area of Duke Street. His opponent had 17 signs, many of which were placed in front of the other candidate’s signs so as to block them from view.

When a recent storm brought rain and wind, signs were blown over and into the street and yards, where many remained weeks later.

It is time for the new city council to reign in this gluttony. Some candidates seem to think that we voters elect the person who erects the most signs, when we do not. It would be a significant improvement for the electoral process if more time were spent bringing issues to the electorate.

City council should enact an ordinance prohibiting campaign signs on public property, including street medians and curbs, sidewalks, parkland and government buildings. If a private property owner wishes to place 100 signs in their private yard, so be it.

But this vandalism of our city must stop.