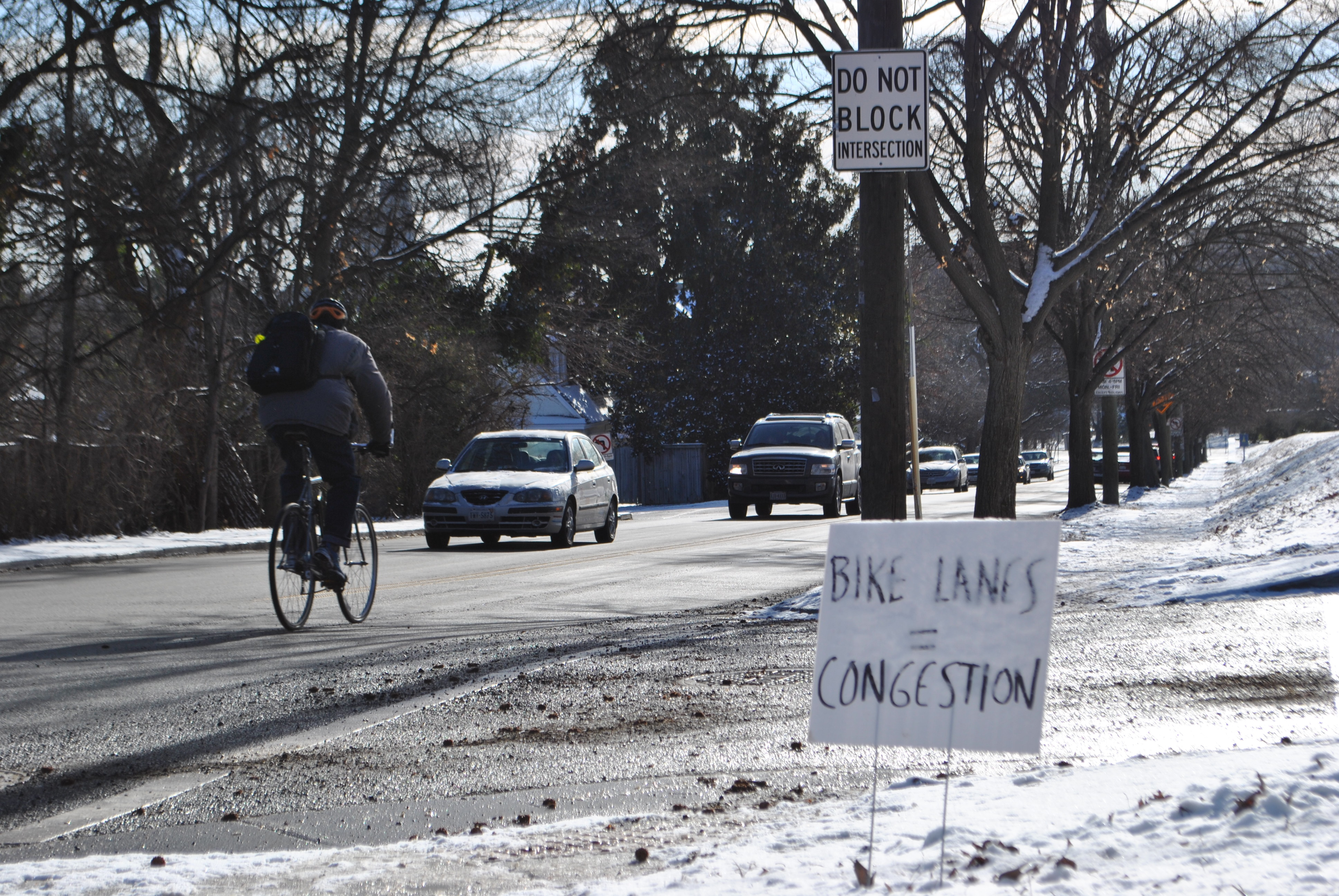 Eighteen months after the installation of dedicated bike lanes along upper King Street from Janneys Lane to West Cedar Street, a report prepared by the city department of transportation and environmental services says the lanes have reduced vehicle speeds and crashes and have increased the number of bicyclists along the busy stretch of road.

Data was collected on the speed and volume of vehicles and the number of bicyclists between September 14 and September 22, with crashes involving pedestrians, vehicles and bicyclists compared 17 months before and after the bike lanes’ installation.

The issue of bike lanes along upper King Street was a source of controversy before they were approved in 2014. City staff and cycling advocates argued the lanes would improve safety for pedestrians, bicyclists and drivers alike, while neighbors said the removal of parking and narrowing of lanes would have the opposite effect.

Carrie Sanders, acting deputy director of the city’s department of transportation and environmental services, said that the numbers are encouraging and show signs of progress being made in improving safety for all road users.

“From that perspective, the project has proven successful by meeting these goals and certainly it’s a step in the expansion of the bicycle network but also improving pedestrian safety in the city,” she said.

To measure vehicle speeds and traffic volume, city staff laid down tubes on the roadway at various locations to count. While Sanders did not go into specifics on where those tubes were laid, she said the locations and timing were consistent with when the last count was done before the lanes were installed. Opponents of the bike lanes, however, remain unconvinced by their impact on vehicle speeds.

“Residents would like to see the chart and analyze it and have some assurance that the city has actually done a good measurement,” said Louise Welch, a nearby resident. “What were the measures of success and how did they meet these measures of success? The report itself does not prove that the bike lanes are successful.”

Neither Sanders nor the report specified where the eight vehicular crashes took place or what caused them. But she said that the downward trend shows that the area is becoming safer for use by bicyclists and pedestrians.

“At this stage, we’re more compiling data for numbers of projects to see the trends: crashes going down, crashes going up, that type of thing, and thankfully in this case and in other projects where we’ve done improvements in safety, we are seeing the reduction,” she said. “What we want to see is it go to zero. That would be the best outcome for everybody. There’s more work to be done to get us there, but I think we’re making progress.”

Welch instead believes that safety was undermined by the installation of the bike lanes, although she acknowledged that some changes have made the area much safer for pedestrians.

“They’ve narrowed the roadway and access to homes for residents and visitors and service people is now much less safe,” she said. “The city did, however, make some good pedestrian changes such as crosswalks and stoplights.”

Both agreed that one of the challenges along upper King Street will be to ensure that the bike lanes are not obstructed by trash cans or other items in the roadway, as they would force bicyclists into the road to avoid them. Sanders said the city will continue to look for improvements, although they are somewhat constrained by the street’s setting.

“Unfortunately, there’s not a lot of options for where the trash cans can be placed, simply because of the way that the street is designed, and you can see in some portions of the roadway we do have a fence that’s right up against the sidewalk,” she said. “We have been getting this comment, [and] we have been reaching out to the community to ask neighborhoods to not just in this location but other locations to make sure that the bike lane is accessible for the cyclists and to minimize disruption of that space.”

With the city considering participating in Vision Zero, an international program that looks to end all fatalities and serious injuries on the roads, there are plenty of projects on the horizon when it comes to improving road safety for all users and improving connections.

“I think that there’s always more work to be done and one thing that this Vision Zero idea that we’re looking at that has been used in Washington, D.C. and New York City and also some smaller cities throughout the U.S., we really think that is a positive direction for the city to go to really look at the street and all users,” Sanders said. “We want to make sure that as we build projects that we’re taking all those users into consideration, that we’re balancing the projects for those users, that we’re really seeing a decline in crashes.”