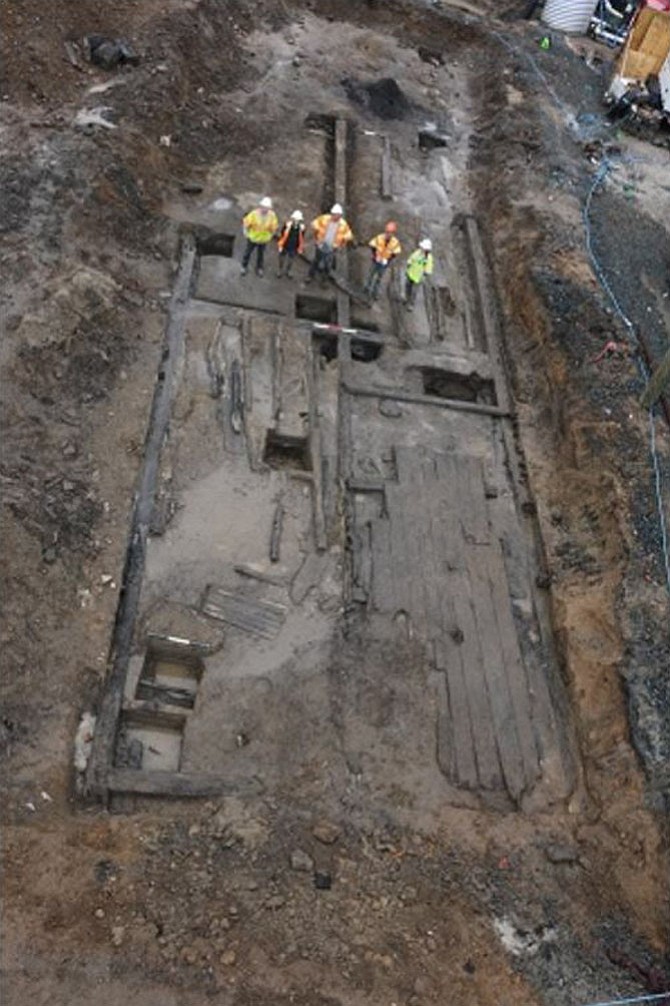 In 1755, just six years after the founding of the Town of Alexandria, the town’s Board of Trustees called upon its colleague John Carlyle to build a public warehouse at the foot of Duke Street, at what would become 220 S. Union St.

Measuring 100 feet long by 24 feet wide, it housed a variety of industrial businesses as the city’s port looked to become one of the most important in the United States, but the building was destroyed before the turn of the 19th century. New businesses sprung up on the site, including the Bryant Fertilizer Company in the 1890s, but historians did not believe the original structure had survived.

The Scottish immigrant built his warehouse on Port Lumley, where the deep water of the Potomac River approached the city’s shoreline, and extended Duke Street nearby. He was assigned with the task at the trustees’ June 18, 1755 meeting, and Francine Bromberg, the city’s archaeologist, says the warehouse holds added significance.

“You could think of this as being the first public works project in the city,” she said. “It is a public project, so all the other land along the cove was sold off in parcels, but this particular point remained public land and so the warehouse was a publicly-owned building.”

Fast-forward to 2015, and construction of that section of the waterfront is underway to build the 250-room Indigo Hotel owned by Carr Hospitality. It was during construction in September that archaeologists made the surprising discovery of several large timbers, prompting an archaeological investigation by the city’s Archaeological Protection Code, which halted building work. In early November, the investigation showed that the timbers belonged to Carlyle’s original warehouse.

“It really is one of the earliest structures that has been archaeologically discovered on the waterfront, so is highly significant. [It] results from this implementation of the Archaeological Protection Code, which requires us to review it and then to determine the level of work, which in this case was complete documentary study,” said Bromberg. “[We] then do archaeological testing on the site to determine if resources are present. This is six years after the founding of the town, so here we are really going back to the very essence of what were those earliest days in Alexandria.”

The timbers were discovered during the digging of four-foot deep trenches during the placing of pilings for the new hotel, with the potential for the discovery of ships and other materials used as infill to “bank out” what was once all the Potomac River. The wood was so well preserved because it was on a waterlogged site in which there is a lack of oxygen. Once the timbers were removed from this preservation-conducive environment, experts had to work
fast to prevent them from degrading too much.

The timbers were quickly sent to the Maryland Archaeological Conservation Laboratory at the Jefferson Patterson Park and Museum in Leonard, Md., where a chemical process will replace the water contained within the wood and then they will be placed in a freeze dryer to be preserved.

The original land plats from 1774 show a structure that ran at an angle from the south west to north east on the Duke Street side of the property, with wooden beams that were between 20 and 30 feet long that were a foot by a foot in cross-section. The discovered timbers almost entirely corresponded to the original plats, with archaeologists able to piece together the document and physical evidence to draw their conclusions.

“The light bulbs really went off when the archaeologists who were out there realized that the building measured 24 feet wide,” Bromberg said. “All of this information that matched the documentary record is what makes the identification possible and absolute. It’s sort of a deductive process of putting together what you see in the archaeological record with what you have discovered by doing the historical research.”

With so much development slated for Alexandria’s historic waterfront, there may be more opportunities to discover pieces of the city’s past as it prepares for its future. Bromberg is hopeful that the 1755 warehouse can be commemorated in some way in the new development, albeit away from its original site, which will be the new hotel.