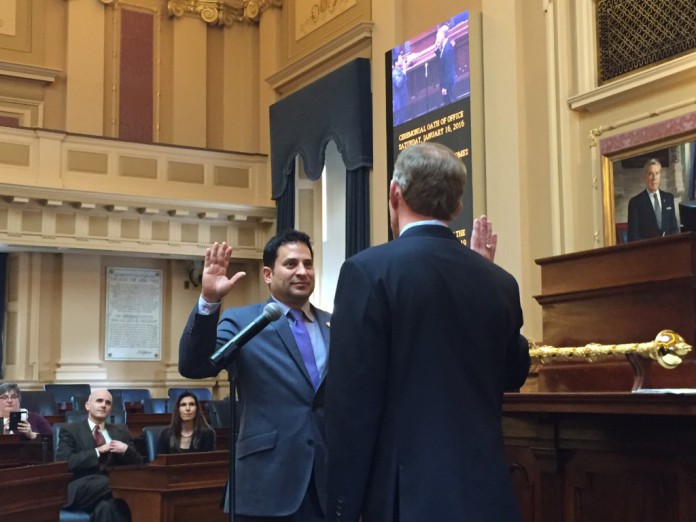 The Virginia General Assembly’s 2016 legislative session got underway January 13, and in its agenda for this year, the City of Alexandria emphasized its support for issues that would affect all of Northern Virginia while also encouraging state legislators to ensure the city does not lose out on transportation funding in this year’s budget.

The biggest section of the document is the one devoted to transportation, where it asks Alexandria’s delegation in the state legislature to work to address the upcoming shortfall in state funding for capital needs and to ensure that the city’s transportation funding is not cut.

Funds for transportation are at a premium at both the federal and state levels, with the planned Potomac Yard Metro station slated to be funded from a number of sources, including a loan from the Virginia Transportation Infrastructure Bank and a grant from the Northern Virginia Transit Authority.

Given the variety of transportation needs across different parts of the state, cooperation between different jurisdictions is key. City Councilor Paul Smedberg said a number of regional bodies ease that process, as politicians of all stripes agree on many aspects of transportation policy for their area.

“We work together with the [Northern Virginia Transportation Commission], several of our state legislative representatives are Republican and many of them are from the Loudoun area, and they have different priorities at times, but yet we all work together pretty closely to make sure that the region is well represented,” he said.

“I’m on the [Virginia Railway Express] board, and there’s another case where you have a regional body but it’s a very collaborative group, despite our political or philosophical differences.”

In addition, several city transportation issues have been taken up by the local delegation, including the desire to implement a floor on the Northern Virginia regional motor fuels sales tax. Currently, one gas tax goes to the commonwealth, while another goes to local jurisdictions in Northern Virginia on fuel bought there to help pay for transportation needs.

The commonwealth’s collection of transportation funds has remained steady due to a floor that ensured that taxes collected could rise but not fall below a certain level. But there is no such provision in the local gas tax, and that is something that the city would like to change.

Delegate Mark Levine (D-45) has taken up that particular challenge in his first term since succeeding the now-retired Rob Krupicka, and said in an interview that a regional gas tax floor “makes sense” for the area.

Elsewhere, human services and employment needs are front and center, with Levine sponsoring a city-suggested bill that would give localities the flexibility to raise their minimum wage up to $10 an hour and then beyond based on the consumer price index.

“Alexandria is a lot more expensive to live in than other parts of the state, and that’s a good thing because we have a good quality of life in Alexandria and Arlington and Fairfax and Northern Virginia,” he said. “My hope is that my bill is local control, a conservative value, the idea that localities would be in charge. It allows each locality the ability to raise the minimum wage to what their representatives want. It’s complete local control.”

Not on the city’s initial agenda, but something that was suggested by City Councilor Justin Wilson, is a bill by state Sen. Adam Ebbin (D-30) requiring vacant buildings to be registered with the locality. Ebbin said it was inspired in part by some vacant buildings in Alexandria that have sat unused for some time.

With Republicans controlling both houses of the General Assembly, Alexandria’s delegates were reluctant to express too much optimism that the majority of this year’s initiatives would pass. But there is hope for the issues that have broad support across party lines.

“There are some things you know when you put it in that it’s going to be a real uphill battle,” said Bernie Caton, the city’s top lobbyist. “The first issue on our current one is funding for K-12 education, and that looks like we’re going to do well on that. There’s another one, the Virginia Pre-School Initiative, it looks like we’re going to do better on that than we thought we would. We support the expansion of Medicaid. That is an uphill battle if there’s anything that is, because the Republicans are against it, the Democrats are for it.”

“I daresay my constituents love these bills, and I love them too, but I’m not naïve,” Levine said. “Some of them are more likely to pass than others, but I think most of them are things and most of Northern Virginia will support but we probably won’t get a majority and I suspect most of the city’s agenda will not pass this year because we just don’t have the votes.”