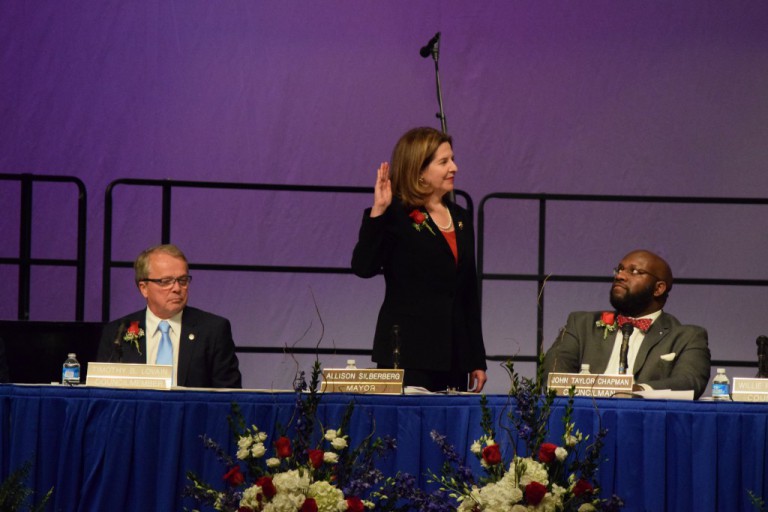 There was a distinct sense of the new replacing the old Monday night in the auditorium of T.C. Williams High School as the new city council was officially installed, to be led by new Mayor Allison Silberberg in her first term.

And while the majority of her colleagues — Vice Mayor Justin Wilson and city councilors John Chapman, Tim Lovain, Del Pepper and Paul Smedberg — were re-elected from the previous term alongside first-term City Councilor Willie Bailey, the sense of history was palpable as the city bade farewell to former Mayor Bill Euille, who is leaving office after 12 years in the city’s top job and 21 on council.

“Thank you for being a good and faithful servant of this Alexandria community,” Chapman told Euille during his remarks after being sworn in, his voice faltering with emotion.

Euille, meanwhile, thanked residents for their support, having grown up in the city before getting involved in politics. He spoke of looking out of his office window at City Hall onto Market Square, a place where slaves once were sold, and being proud of serving as the city’s first black mayor.

“It goes to show you that Alexandria has had a lot of history, and the fact that I have been able to serve as mayor says a lot,” he said.

Euille went on to advise the new council to work together in tackling the tough decisions that lie ahead, and not to duck any of them. He also said they must be good listeners and heed the concerns of residents.

Silberberg echoed that spirit of cooperation and listening to the public in her remarks after being officially sworn in by Alexandria Circuit Court Clerk Ed Semonian. She repeated calls from the campaign trail to establish an ethics advisory commission and a desire to have the issue studied and brought to council in the spring, saying that the commission would be something future residents would be grateful for.

“City Hall can never be separate from the people, because City Hall is the people,” she said.

The new mayor added that she will continue her popular “Council on Your Corner,” a monthly event to engage with residents, only it will be renamed “Mayor on Your Corner.”

Silberberg was joined by several of her colleagues in expressing a desire to diversify the city’s economy, and not be so dependent on the federal government. Vice Mayor Justin Wilson, who was unanimously appointed to the position by his colleagues after winning the most votes in last November’s election, said that while Alexandria residents took home $1.2 billion from jobs with the U.S. Department of Defense, spending at the Pentagon is being reduced dramatically and must be dealt with.

Development on the West End also earned several mentions. Pepper noted that the passage of the Eisenhower West small area plan and the continued work to improve both the Landmark Mall and Van Dorn Street areas would help the city’s economy grow. She also repeated one of her slogans from her campaign, saying, “The West End will rise again,” to rapturous applause from attendees.

Education was an issue that city councilors agreed is a central one, as Alexandria City Public Schools comes up against a capacity crunch and tries to modernize its buildings. Lovain described it as a “happy problem” to have so many children and their parents wanting to be educated in city public schools, and said he would look to bring even more rationality when it comes to deciding how much money council would appropriate to the school system.

Wilson was among a number of officials who mentioned the city’s pressing need to deal with its infrastructure deficit, which extends beyond the schools to include roads, sewers and broadband Internet, among other things. Silberberg too mentioned the importance of investing in infrastructure, but said there were tough decisions to be made and that investments must be made in “mission-critical” needs.

For Bailey, the installation was his first official event as a member of city council, and he took the time to thank all those who had helped him from growing up in Alexandria through the present day. He said he was excited to give back to the city that had given him so much and helped him achieve a great deal in the U.S. Army and now as a battalion chief in the Fairfax County Fire and Rescue Department.

“I know what it means to serve, because I’ve been doing it all my adult life,” he said. “I look forward to serving you for the next three years on city council.”

All expressed a sense of enthusiasm at being able to work together to improve the lives of those in the city, with Silberberg’s theme of cooperation reflected in many of the remarks by her colleagues.

“If we all work together, this city will have an even greater future,” said Smedberg, adding that while the previous council had achieved a great deal, there is plenty of work that lies ahead.