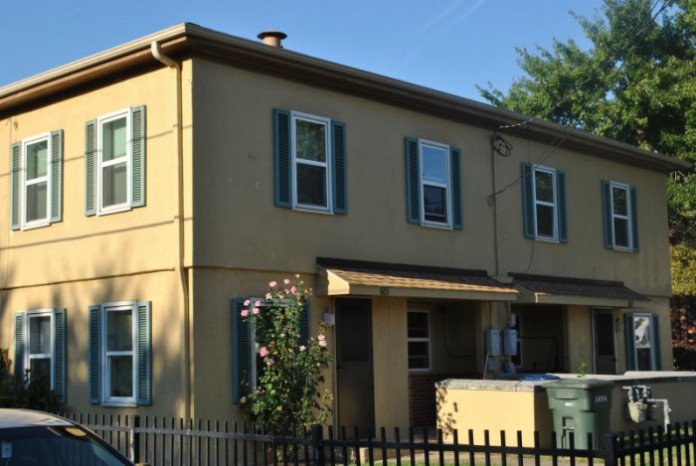 The planned demolition and redevelopment of Ramsey Homes hit a snag February 2, as the planning commission denied part of the Alexandria Redevelopment and Housing Authority’s application by a 4-3 margin. City council will take up the proposal Saturday at its public hearing for further discussion and a final decision.

Commissioners were critical of the process and particularly what they perceived as a lack of analysis on other alternatives beyond the one proposed by ARHA. A presentation by city staff outlined two other options that had been analyzed on the city side, but deemed unfeasible by ARHA staff for financial reasons.

ARHA’s plan proposes 53 multi-family residential units in two buildings, with a courtyard in the middle of the property. ARHA also requested an increase in floor area ratio to 2.0 and a rezoning of the property from a townhouse zone to mixed use.

That proposal would completely demolish the existing 15 units, which were built between 1941 and 1942 by the federal government to house black defense workers. City staff also presented options to save either one or two of the buildings, rehabilitate them and build additional units on the site.

The commission denied the project’s development special use permit, but approved a master plan amendment and rezoning needed for the project. But commissioners struggled with what they viewed as a lack of proper analysis on all options, including a full rehabilitation of the existing units at 699 N. Patrick St.

“The question is: is it wrong to study it? Is it wrong to explore these things?” asked planning commissioner Stewart Dunn. “Is it so important to move ahead now that we would not do any further study? That’s the issue, not what it’s going to be.”

Dunn was critical of the commission’s decision to grant a master plan amendment for the property and the rezoning, something he said was impossible given that commissioners needed more of an idea of what was going to happen. Dunn abstained from those votes and was one of the four votes against the development special use permit.

“To me, it’s really not sound planning to recommend a zoning amendment,” he said. “For us to pass this when we don’t know why we’re passing it, what the purpose is, seems to me unsound.”

The five-hour hearing saw a variety of opinions and featured several residents arguing that the proposed development was not in keeping with the rest of the Parker-Gray Historic District. In addition, several people noted the need for compliance with Section 106 of the National Historic Preservation Act. The district is in the National Register of Historic Places, and under Section 106, officials must engage in a rigorous historic preservation process.

Local development attorney Duncan Blair, representing ARHA, said the applicant had already undertaken plenty of in-depth historical study and would continue to do so after the project’s approval, in keeping with Section 106 requirements.

Several others said moving forward was inappropriate since there is pending litigation in Alexandria Circuit Court challenging city council’s decision to allow demolition at the site.

“Should the court reverse the decision of council, this plan will be illegal,” said resident Elaine Johnston. “Should the court remand the matter to city council and ask them to reconsider, their decision at that time would be prejudged by having already approved this plan requiring demolition.”

Assistant city attorney Joanna Anderson noted that the commission and council legally could still proceed on this application as it is contingent on demolition. A status conference was held on the case February 8, and a non-jury trial is currently scheduled for August 22.

Residents also raised concerns about the plan increasing density in the neighborhood, as well as an apparent lack of open space on the site for use by all members of the community. Charkenia Walker, the only current resident of Ramsey Homes to testify, said the units are in poor condition, making ARHA’s proposal necessary.

The commission’s decision is merely advisory, so council could still approve the DSUP and allow ARHA to proceed with its current proposal. A public hearing on the matter is scheduled for Saturday at City Hall, where ARHA officials said they would welcome further discussion.