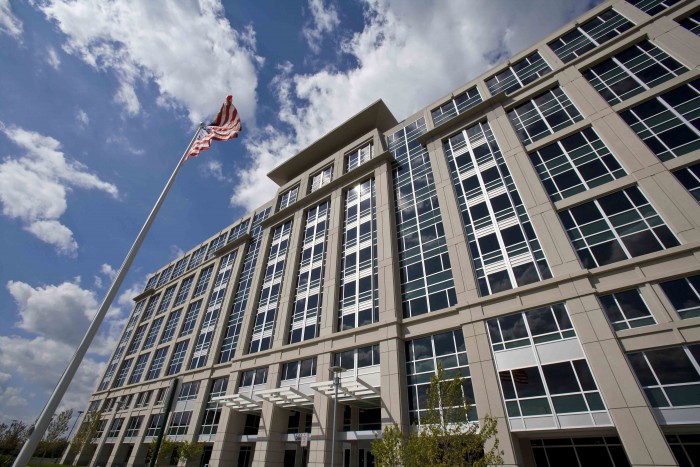 Questions remain over the fate of the new U.S. Transportation Security Administration headquarters, which had been set to move to the Victory Center in Alexandria. But a new bid process now appears to be delaying any progress.

The Washington Business Journal reported on April 1, citing multiple anonymous sources, that the General Services Administration has delayed the TSA’s move, which was expected in 2018, until 2020. The decision comes weeks after the GSA issued an amendment to the request for lease proposals to bidders, which spokeswoman Teressa Wykpisz-Lee said clarified certain requirements.

Wykpisz-Lee said the amendment was issued on March 14 and that responses by bidders are due by April 14. She did not go into detail on the nature of the amendment because it is an active procurement, and did not respond to requests for confirmation of the long-term delay. John Chartier, spokesman for Victory Center owners Prudential Real Estate Inc., declined to comment.

Last August, the Victory Center at 5001 Eisenhower Ave. was announced as the TSA’s new landlord to much fanfare, and appeared to be ending the building’s decade-long vacancy. But just three months later, Judge Charles Lettow of the U.S. Court of Federal Claims ordered the lease voided after an appeal by Boston Properties, Inc., owner of a Springfield, Va. property that lost out on the bid.

In Lettow’s order, which was unsealed on November 25, he criticized the GSA’s decision to award the lease to Victory Center, having been authorized by Congress to select up to 625,000 square feet of space. It instead awarded a lease for up to 665,000 square feet, including a 140,000 square foot addition to be built adjacent to the building.

He cited several internal GSA memos that acknowledged the agency knew that the proposal from the Victory Center exceeded 625,000 square feet. But those memos said the bid should not be disqualified on this basis as it would leave the process open to delays in relocation and would mean paying additional rent on the current TSA headquarters in Arlington.

It now appears likely that the lease on the TSA’s current headquarters at 601 and 701 S. 12th St. near the Pentagon City Metro station will be extended, having been set originally to expire in 2018.

The rebooted bidding process had given some officials cause for concern, especially given that Lettow’s ruling, while redacted in places, had revealed crucial details about Victory Center’s winning bid for public consumption.

“It’s almost like poker and winning a hand, and then everybody gets to see the hand that you won,” said City Councilor John Chapman. “Now they know how you work.”

Stephanie Landrum, president and CEO of the Alexandria Economic Development Partnership, said the bidding process would stay competitive given the differing circumstances of each bidder. She confirmed that the Victory Center remains in the running for the federal agency.

“Of all the different finalists, each one has a different set of circumstances in terms of who owns the building and how much they own the land for, and some would argue that an existing building has a competitive advantage because it’s not as expensive,” she said. “To build something brand new, you have to get all the materials and pay for all the construction costs, where [with] an existing building there’s a different set of costs involved that are presumably a little less expensive.”

The city’s Eisenhower West small area plan was adopted by city council in November 2015, with the TSA’s tenancy seen as a big economic driver for further development. Chapman said its occupation by either a federal agency or a private entity could catalyze the area’s growth.

“The Victory Center area is such a big percentage of the area there, I think it would be a big deal if we could get a federal tenant in there for a good little while,” he said. “I think it really kick-starts development in that area and I think the owners as well as some of the other development partners are waiting for something to come in so they can see the real direction of that part of Eisenhower Avenue.”

The delay in a new tenant for the Victory Center means the office vacancy rate in Alexandria stays at 16.5 percent, having been set to come down to 13.5 percent with the TSA’s arrival. High office vacancy rates are a regional issue, and Chapman said the city must play up what makes it unique in the region as opposed to being part of a race with other jurisdictions to give away tax breaks and other financial incentives.

“Besides money, there need to be other things that companies and tenants want to move here for,” he said. “Some folks are going to want to go out to Tysons because it’s Tysons, not because of the price point. Likewise, they’re going to want to come to Alexandria because of specific reasons, and if that’s not the case, we need to make it the case.”