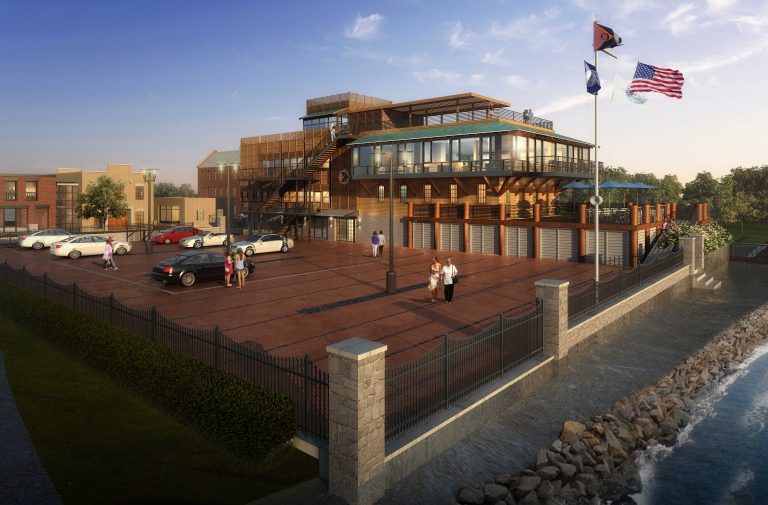 After decades of legal wrangling and the threat of eminent domain, the Old Dominion Boat Club moved a step closer to its new clubhouse with a groundbreaking ceremony last week.

ODBC’s new clubhouse will be located at 0 Prince St., the former location of the Beachcomber building and a block south of its current home at the foot of King Street. Construction is expected to be completed next year.

“I know a lot of good memories will be had here once the building is built,” said Mayor Allison Silberberg at the ceremony. “…The Old Dominion Boat Club is about community. It’s an incredibly historic and treasured part of our city.”

As part of redevelopment along the city’s waterfront and an effort to expand pedestrian access to the Potomac River, the city and the club were involved in decades of litigation that began in the 1970s. Things came to a head in 2013, when the city threatened seizure of the property through eminent domain. The following year, club members agreed to a land swap to relocate to the city-owned Beachcomber property and receive $5 million to go towards construction of a new clubhouse.

Sixty-six percent of the 400 ODBC members who cast ballots over a three-day period favored the swap. A second offer, which would have let the club trade its waterfront parking lot for $2.5 million and nearby parking spaces, garnered 24 percent of the vote. The option of rejecting both offers received support from 12 percent of participating members.

City council and ODBC members approved the new building in March 2015, and with the ground officially broken, club officials said they are hopeful for the future.

“We’re looking forward,” said club president Richard Banchoff. “I don’t want to lead anyone to believe that we were happy with the Hobson’s choice that we were given, but on the other hand, we’re going to make the best of it.”

The new clubhouse will be on three stories and includes a 45-space parking lot. The ground floor entry lobby will display historic artifacts and have storage, lockers and showers for members.

The first floor will host a hall for meetings and rentals as well as offices, an outdoor patio and a kitchen, while the second floor will include a ballroom, a boardroom and kitchen. Above it all will be a rooftop entertainment space.

Banchoff said the new facility will better utilize space, while there will be more room for members to enjoy food and drink in an updated tap room.

“It’s going to bring a lot of nice things to the members that are a step up from here, although we love this place,” he said. “It’s sort of like, you get used to an old pair of shoes or an old hat or something, but I think they’re going to fall in love with the new place.”

The clubhouse was designed by local architecture firm Michael Winstanley Architects & Planners, which worked closely with the Old and Historic District’s Board of Architectural Review as well as club members. Firm principal Michael Winstanley said it was important to have the building be unique among other waterfront properties and reflective of the club’s history.

“The narrative was that we wanted to make a building that looked like the boat builders made it, since it was a boat house,” Winstanley said. “We started looking at wood structures and wood boat structures and the structure of boats, and just really translated that into building architecture. … I think at the end, the club looked at the whole project and decided that if they were going to do a building that a boat builder would make, they’d make it out of wood.”

For club members, it represents a new chapter, albeit one that comes with mixed emotions.

“I’ve been a member for over 20 years, and there’s a lot of members we have here who have been members for 50 years,” Banchoff said. “It’s been here the whole time. We’re very comfortable here, we’re very happy here, we’re still happy here. We think, though, that we’ve designed and built a club that we’re going to be happy in when we move to Prince Street.”

The boat club’s relocation represents a significant step towards the city’s vision of a continuous waterfront walkway and the area’s redevelopment. Under plans to be voted on by the planning commission and council this fall, the current clubhouse would be demolished, with the space used for the interim Fitzgerald Square Park.

The proposed waterfront park would have an area for flexible uses like a temporary ice rink in the winter and a beach in the summer. Other programming would be available as well as seating.

Jody Manor, a member of the waterfront commission and a local business owner, said the move represented progress for the city and the club. Manor and former colleague Christine Bernstein previously campaigned heavily for the land swap.

“This is a big day for the boat club and the city, because looking at the design, talking to the architect, the new facility is going to be fantastic,” he said. “It’s a step forward for the boat club, and an opportunity for the city to open the foot of King Street to the public and have this great view and really make it a gathering place for both residents and visitors.