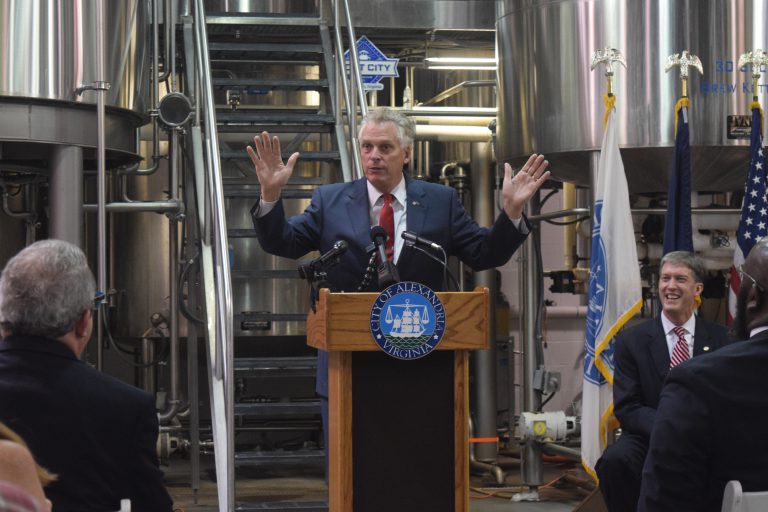 The Port City Brewing Company will move and expand its operations on the West End, aided by a grant from the commonwealth and matching city funds, Gov. Terry McAuliffe (D) announced last week.

Currently located at 3950 Wheeler Ave., the company will receive a $250,000 grant from the Virginia Department of Agriculture and a matching grant of $250,000 from the city, each over a three-year period. It will invest almost $3 million in the expansion and create 26 new jobs.

The expansion means it can more than double its production to meet increasing demand in its current distribution markets as well as enter new ones.

“Investments like this create jobs, tourism opportunities and new markets for Virginia’s farmers, as craft breweries source products like hops, fruit, herbs and other agricultural products,” said McAuliffe at the announcement August 31. “Port City is a nationally renowned craft brewery, and I am thrilled to help them launch a new chapter in their growth.”

Already, Port City purchases several thousand pounds of wheat from farmers in Virginia for its Optimal Wit beer, with a 350,000-pound purchase of red winter wheat expected this year from a farm in Heathrow.

Usually, businesses in rural areas take advantage of AFID grant funding, but Alexandria Economic Development Partnership president and CEO Stephanie Landrum said the program was ideal given Port City’s use of agricultural goods for its products.

The commonwealth funds will be matched by the city, which will pay $155,000 in cash and cover the remaining $95,000 by installing a Capi- tal Bikeshare station nearby as well as bike racks and other cycling amenities.

Landrum said the city’s cash injection comes from a fund established by city council in the fiscal 2017 budget for projects where state dollars can be leveraged, as well as bond financing fees and some money left over from the fiscal 2016 budget.

Officials said Port City Brewing’s partnerships that helped it leverage the AFID grant are beneficial across Virginia. They allow an urban business to expand while at the same time buying products from rural areas.

“Port City’s expansion in Alexandria is a great story of a local business growing its operations and connecting with area producers to create a unique product that show- cases the terroir of Virginia,” said state Secretary of Agriculture and Forestry Todd Haymore. “The economic development project creates new jobs and revenue streams and demonstrates the role agriculture can play in urban areas of the commonwealth.”

Founded in 2011 by Bill and Karen Butcher, Port City Brewing Company distributes as far north as New York and as far south as North Carolina. It brews 17,000 barrels of beer per year, and has won a bevy of awards. In 2015, it won the prestigious Small Brewing Company and Small Brewing Company Brewer of the Year awards at the Great American Beer Festival and won medals for its Optimal Wit, Monumental IPA and Porter beers.

It has been quite a journey for the Butcher family, which has been in Alexandria since 1908. Local representatives said the brewery has given the city something to be famous for in the 21st century, in addition to its past as a Colonial trading port and manufacturing hub and an occupied city during the Civil War.

“Their commitment to the city is more than how long their family has lived here, but it’s evidenced by what’s behind us and the money they’ve invested and the faith they’ve put in us,” said state Sen. Adam Ebbin (D-30). “Further, we all know Alexandria is a historic city and known around the country, but we want to thank Port City [Brewing] for seeing that we’re known around the country to another generation of Americans not just for history but also for beer.”

Port City Brewing had considered expanding for a couple of years, especially after an average growth per year of 40 percent since it opened. Such growth and a lack of space coupled with real estate available in other areas like Fairfax and Loudoun counties led Butcher to initially look elsewhere for alternative locations.

But having spent about a year working with AEDP on the expansion project, the brewery will stay put on the West End, just a stone’s throw from its current location.

Mayor Allison Silberberg said in an interview after the announcement that the company’s role as a local manufacturer is significant, and that selling their products will mean a swift return on the city’s investment.

“[I]t gets back to our core roots,” Silberberg said. “[Butcher is] manufacturing something that’s unique and American and Alexandrian. We’re very proud of it. We feel that this is an investment in a local business that will come back many-fold to us. We have jobs, we’re retaining a business and it will come back in tax revenue, jobs and tourism.”

It is the second time that the city and the governor have announced a homegrown business will stay in Alexandria and made use of council’s newly established fund for such projects. In late July, multimedia financial services company The Motley Fool announced it would stay in the city and keep its headquarters in the Carlyle neighborhood.