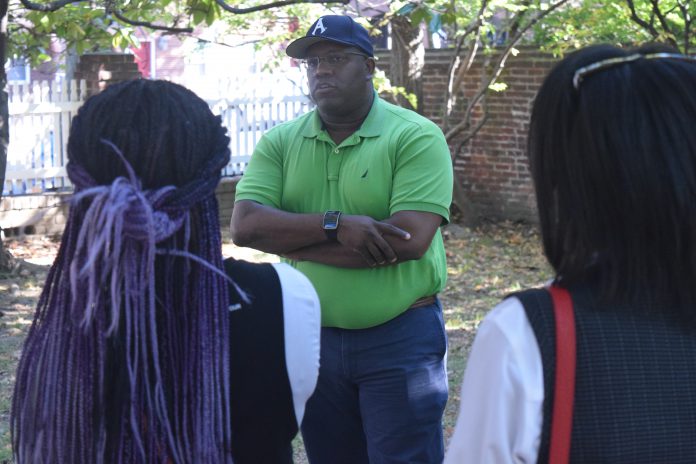 On Sunday, one day after city council’s October public hearing, City Councilor John Chapman led a group on a tour of the city, but it was not the typical roundup of historic sites.

Chapman formed the Manumission Tour Company in May, and for the past three weeks has helped visitors and residents explore the city’s black history. Called “Freedom’s Fight in Alexandria,” it visited several important sites in Old Town where slaves were owned, bought and sold as well as the homes and businesses of several abolitionists.

The company is named after the act of a slave being freed by his or her master, and Chapman said he wanted to shed more light on the term “manumission.”

“I wanted to stand out, and I wanted to make folks think a little bit,” he said. “When you hear the name ‘manumission,’ many people don’t know what that word means, so they’re forced to look it up. … I think it’s a word that needs to be used a little bit more when we talk about slavery and freedom, and it’s not right now. Hopefully that inserts a word and builds some- thing around it.”

Chapman said he decided to form the company because of a paucity of existing options for Alexandrians and visitors to learn about the city’s black history. He said tours would be made available either through the Office of Historic Alexandria or other groups on occasion, but often those are not scheduled on a regular basis.

That, combined with a recent controversy over a site of historical significance for the city’s black community, sparked Chapman’s idea for the company.

“I started thinking about the idea after the Ramsey Homes controversy, because there were a couple of elders in the community that questioned me,” Chapman said. “‘John, you know your history about the sites and whatnot?’ they asked me. I said yes, but one of the problems we do have in this city is that we don’t talk about them very much. We don’t highlight them. We don’t bring people out and showcase them.”

Even before city council took its summer recess, Chapman began his research at the Barrett Branch Library’s special collections on Queen Street, itself a significant site in black history as it played host to one of the country’s first sit-ins in 1939. Led by Samuel Tucker, several black men were refused service at what was then an all-white library and then arrested for disorderly conduct.

The tour began at Barrett, then worked its way toward the Lloyd House and the site of the Hoffman Sugar Refinery on North Washington Street. The refinery used slaves to manufacture sugar after it opened in 1808, but Chapman said that when it closed 20 years later, all the slaves were manumitted and granted their freedom.

Lloyd House served as Alexandria’s Freedmen’s Bureau under a federal program to give aid to freed slaves. Beforehand, it had been rented by Quaker, teacher and abolitionist Benjamin Hallowell, who taught Robert E. Lee before Lee became a general in the Confederate Army.

Chapman went on to ex- plain how Hallowell influenced his son Henry to be a similarly ardent abolitionist. Henry Hallowell ran anti-slavery campaigns and was involved in the Underground Railroad, a secret network of routes and safe houses to help escaped slaves flee north.

The northern section of Old Town also housed a number of escaped slaves, including Arthur Cooper, who fled to Nantucket and then became such a renowned figure that slave- catchers who went looking for him were beaten back. Cooper went on to become the first known minister of the Zion Methodist Church.

The tour traveled to well- known sites in the city, including Gadsby’s Tavern, which had slaves as young as 12 years old working in its stables and kitchens, and Market Square, which served as a trading-point and an auction site for slave owners.

But lesser-known sites were highlighted too, including the former home of Susan Gordon and her slave George Ball at 505 Cameron St.

Chapman said Gordon made an agreement that Ball could buy his freedom if he saved enough money, but she continued to raise the price of the deal. In the end, Ball ran away to Pennsylvania and convinced his family to attempt to escape too.

After the tour, Chapman said while it was imperative to highlight well-known sites like the Carlyle House and the point along the waterfront where slaves would enter the city, it was also rewarding to find sites off the beaten path to show.

“During my research, I started to see more and more sites, and they were closer and closer together,” he said. “Picking out this route, I wanted to make sure that folks started somewhere up west and worked their way east to the waterfront. … Those are really interesting stories, when you do the research and find them.”

Chapman said he intends for a portion of the money raised by the for-profit company to go to the historic preservation community, including the Society for Preservation of Black History in Alexandria.

And in the future, he said he intends to put together more routes, including one along Upper Duke Street to incorporate the Freedom House, which once served as the offices of the Franklin and Armfield slave trading company.

In addition, Chapman said he is considering a gentrification tour after discussions with former Mayor Bill Euille to explore the impact of redevelopment on black communities in the city.