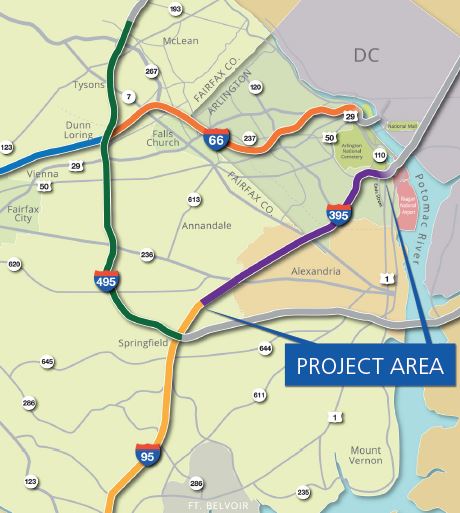 The project to expand the Interstate 395 express lanes north through Alexandria to the D.C. line came under scrutiny last week from city councilors, who wanted to ensure the city receives its fair share of transit funding from toll revenues.

The lanes would replace the high-occupancy vehicle lanes on I-395 for eight miles from Turkeycock Run near I-395’s Edsall Road exit to the vicinity of Eads Street in Arlington County, near the Pentagon.

The Virginia Department of Transportation is partnering with Transurban to complete the plan as part of the comprehensive agreement between the two bodies to provide express lanes on I-95. Construction is slated to begin next summer and last until summer 2019.

Solo drivers pay a toll to use the express lanes — formally known as high-occupancy toll lanes — while carpools of two or more riders, vanpools and buses can use the lanes toll-free.

Toll rates are adjusted based on congestion to ensure the HOT lanes are free flowing, and the lanes’ direction can be reversed at different times of the day to take into account which way the majority of drivers travel.

As part of the project, Trans- urban has committed to paying a minimum of $15 million annually to the jurisdictions through which the new lanes will run — the city of Alexandria and Arlington and Fairfax counties — to fund transit services and new projects along the corridor.

VDOT megaprojects director Susan Shaw told city council at its October 25 meeting that the money could go to local transit agencies or fund specific projects and elements that benefit travel in this segment of I-395, and that VDOT is committed to revenue shar- ing between the jurisdictions.

Among the projects VDOT officials said the toll money could go towards in Alexandria are making existing DASH bus routes run more frequently; the purchase of new DASH buses; improvements to the DASH bus garage; the pro- posed bus rapid transit services on the West End and along Duke Street; improvements to the King Street and Van Dorn Street Metro stations; the proposed Potomac Yard Metro station; and new or expanded transit centers at Landmark
Mall and Mark Center.

But councilors sought assurances that Alexandria would receive its fair share of toll money for local projects, since the express lanes would run through the city’s borders.

VDOT special projects manager Amanda Baxter said the tolls accrued as part of the improvements to I-66 inside the Capital Beltway were given to the Northern Virginia Transportation Commission, which then administered the funding through its own process to select projects.

Baxter said a transit study for the HOT lane expansion is underway and expected to be completed in December. She said that study will outline a list of projects that will receive funds form the tolls, based in part on feedback from 11 key stakeholder groups and through other public outreach. Meanwhile, the project’s environmental and traffic studies are being worked on and are slated for final approval late this year.

Shaw said projects receiving funding must benefit travel in the corridor, but councilors wanted assurances Alexandria in particular would benefit.

“There is a geography that is going to be impacted by this project,” said Vice Mayor Jusin Wilson.“The benef it is not necessarily going to accrue to that geography, and so I think any funding plan for how we distribute transportation funds should recognize that fact…

“It’s regional connectivity that we are all committed to, but it’s also an impact on our city and the benefits that you’re offering,” said Mayor Allison Silberberg. “[We’re] all looking after our citizenry and those benefits.”

Stretches of the highway in Alexandria will be eligible to have noise walls installed after the completion of a preliminary traffic noise study. Shaw said that barriers on a 3.4-mile section of the highway would be feasible according to preliminary studies, while two other barriers will be constructed as part of a previous project.

The noise walls would re- quire approval from nearby residents, but councilors said other options should be explored as well, since installing the walls means removing a number of mature trees near the highway.

“People will be looking at walls; a lot of trees would be taken out,” said Silberberg, who also advocated for other highway beautification projects. “It’s a balancing act.”

City Councilor Tim Lovain agreed, and said work must be also done to improve the appearance of the pedestrian overpass linking Parkfairfax to Shirlington Town Center in Arlington.

The project’s final environmental impact study and the final transit study are slated for approval next month. A final financial agreement should be in place by January 2017.