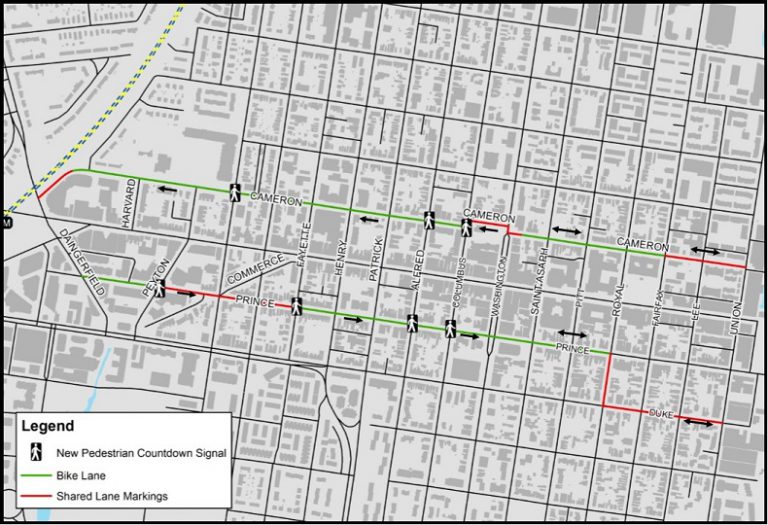 By Chris Teale (Image/City of Alexandria)

Cameron and Prince streets in Old Town are set to receive bicycle lanes and other safety improvements after they are
resurfaced next spring, with officials arguing the streets can become an “enhanced bicycle corridor.”

But community leaders are concerned about pedestrian safety after a number of incidents involving motorists and what they describe as confusion over whether charges brought under state or city code will result in convictions.

The project will result in bicycle lanes for large stretches of both Cameron and Prince streets between the King
Street Metro station and Union Street, with shared lane markings — commonly known as sharrows — in areas not wide
enough for full bike lanes.

No travel lanes or on-street parking spaces will be removed to accommodate the new bike lanes, officials said.

In addition, pedestrian countdown signals have been installed at certain intersections, while ramps not compliant with the Americans with Disabilities Act will be replaced and sidewalks will be repaired.

City transportation director Yon Lambert said the changes are to enhance road safety for all users: drivers, pedestrians and bicyclists.

“Right now, we know that there are accessibility and pedestrian safety improvements that we can make,” he said. “Certainly we think installing the pedestrian countdown signals will help make it safer for the large pedestrian population that uses these streets, and if we can install better bike facilities without removing parking spaces or travel lanes, those are the types of improvements we want to be able to make to improve conditions for all users.”

Lambert said a so-called “enhanced bicycle corridor” is appropriate for Cameron and Prince streets as it provides another connection between the King Street Metro station and the waterfront, and that such connectivity goes hand-in-hand with other safety improvements.

Both streets had been identified for such a change when the city’s pedestrian and bicycle master plan was updated
earlier this year.

“In the planning of the pedestrian and bicycle master plan update, there were connections identified throughout
the city that needed to be added to the network to improve safety for all users,” Lambert said. “That’s really the case for Cameron and Prince. The idea here is that providing this east-west connectivity between the waterfront and the King Street Metro station between so many job locations and the Metro station was important.”

While officials anticipate that the new lanes will not result in any delays for vehicles on the two streets, the bike lanes will result in a reduction of speeds closer to the 25-mph limit posted throughout Old Town.

But some members of the community questioned the project’s necessity.

“I don’t regard Complete Streets, specifically on Cameron and on Prince, as particularly necessary projects,” said Yvonne Weight Callahan, president of the Old Town Civic Association. “I’m going to be very curious to see how it really works out in practice. Oddly enough, even though there’s quite a large number of association members in that area, I’ve never heard from anybody living on Cameron or on Prince streets one way or another about it. I was very surprised.”

Callahan said a bigger concern in the city revolves around the enforcement of traffic laws, particularly the fining of drivers who fail to yield to pedestrians in crosswalks. In recent months, according to the OTCA newsletter, a car hit a woman and her dog on Union Street, for which the driver was fined $30, and a pedestrian was seriously injured
while crossing U.S. Route 1.

In addition, a dog was killed by a motorist while on its leash, and a woman was hit by a cyclist in the Wilkes Street tunnel who then failed to stop.

Callahan said the laws are not being enforced properly, as there is a disparity between city code and the state codes
regarding failure to yield to pedestrians. Under the city ordinance, Callahan said drivers are charged for failure to yield to pedestrians in “a specifically-marked crosswalk,” which only applies to crosswalks with signs stating fines could be imposed for violation.

She said the city failed to incorporate a portion of state law that allows for fines to be levied at regular street crossings, not just ones that are specifically signed as fineable. Instead, scofflaw drivers could be charged under state law, but the revenue from any fine would go to the state instead of city coffers.

Recently, the Alexandria Police Department has worked with the city attorney’s office to work on fixing the ordinance to incorporate all crosswalks. Officials with the APD’s traffic unit did not respond to requests for comment.

“It’s a very sad indication of how something that shouldn’t have been overlooked in the first place continues to be overlooked, should be corrected promptly and has been going on for a month now,” Callahan said.

For his part, Lambert said traffic laws will continue to be enforced.

“We do a lot of work to make sure we are reminding all road users that we all have responsibilities when we’re out there,” he said. “I fully anticipate that the police department is going to continue to work with us and with their partners in the community to make sure that we are reminding motorists, bicyclists, pedestrians, transit riders that you have to be aware.”