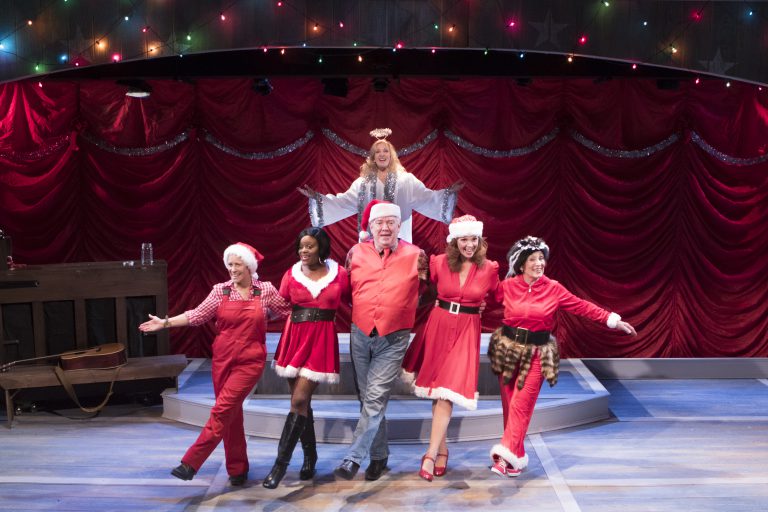 Composer and lyricist Matt Conner, whose past shows include “Crossing,” “The Hollow,” “Nevermore,” and “Partial Eclipse,” in collaboration with lyricist Stephen Gregory Smith, gets us in the Christmas spirit with Signature Theatre’s production of “Silver Belles.”

Set in Silver Ridge, Tenn., this rollicking musical — with a book by Allyson Currin — begins with a funeral. But don’t let that get you down.

The death of Southern diva and Cherry Apple moonshiner Oralene (Donna Migliaccio, but think Dolly Parton’s tongue-in-cheek Southern charm) sets in motion a crazy, countrified mission to continue their best friend’s legacy — writing and staging the Christmas pageant fundraiser for the local orphans at the River of Life Church.

Determined that the show must go on, three of her pals, Berneice (Ilona Dulaski), owner of Berneice’s Taxidermy Emporium, Gloria (Nova Y. Payton), a four-time divorcee, and Ruth Ann (Peggy Yates), a former beauty queen with serious baton-twirling skills, take up the reins.

Unfortunately, Oralene’s husband Earl (Dan Manning), still in mourning, was her guitar-strumming composer and he’s got writer’s block. That is until Oralene gives him the inspiration and the show’s theme, “Take what you can. Give what you should while the gettin’ is good.”

Meanwhile, Earl’s best friend Bo Jack (Naomi Jacob- son), the show’s stage manager and local radio personality for the call-in show, “Swap Meet,” is under pressure from the community to deliver the news that the pageant, which Oralene calls “serious Christmas for serious Christians,” is still on.

The ladies are all aflutter until Oralene’s ghost returns as their muse and they begin to see the light. Think “Golden Girls” meets “The Andy Griffith Show” for its hilarious plot twists. I couldn’t help thinking this could be a terrific TV series.

It’s hard to say who gets the most laughs. Migliaccio is absolutely magical, but Dulaski is an endearing scene-stealer. Berneice’s suggestion that they save production costs by using her Nativity-outfitted stuffed animals in the creche scene, “The Friendly Beasts” is classic.

And keep in mind these are some of Signature Theatre’s finest voices. For frequent audience members, Payton cribs
“And I Am Telling You,” from her big show “Dreamgirls.” Watch for it.