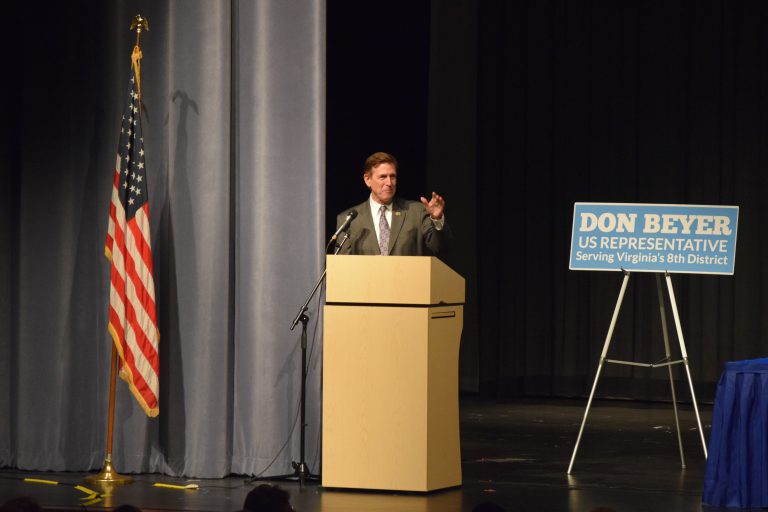 With Republican Donald Trump set to be installed as the United States’ 45th president tomorrow, Alexandrians of all stripes are getting ready to mark the occasion, albeit in different ways.

While many residents are planning to attend the inauguration itself on Capitol Hill, one of the many parties and galas this weekend, or the various protest marches and concerts, one Alexandria local is in the midst of planning Trump’s administration.

Sean Spicer, who lives in the Beverley Hills neighborhood, has been tapped to serve as White House press secretary and Trump’s communications director. He first got involved in politics and election campaigns in college, and said he jumped at the chance to represent the president-elect.

“If you’re a communicator, this is the major leagues, the world series of communications,” Spicer said. “From a very young age, I thought, ‘Maybe I’ll get a shot at doing that.’ You always wonder if that will ever happen, so when that opportunity presents itself, you have to grab hold of it.”

Spicer has been involved with government public relations since the 1990s, and he said he moved from D.C. to Alexandria around 1999. He said the city appealed to him having grown up in a small town near the ocean in Rhode Island.

“While Alexandria is technically a city, it has the feel of a town,” he said. “You know your neighbors, and I think there’s a sense of community that I don’t necessarily think is entirely the same in Arlington or Ballston, not to put them down or anything. I enjoy the waterfront.”

Spicer said that the Trump administration will respect the press and its First Amendment rights, but noted that reporters must “act responsibly.” He drew fire last week from reporters after CNN’s Jim Acosta accused him of threatening to throw him out of a press conference, something Spicer denies.

“I think we recognize that we have a healthy respect for freedom of the press, and we recognize the role that the media plays in a democracy, but we’re not going to let it go unchecked,” Spicer said. “We’re going to call balls and strikes. If we see a report that’s inaccurate we’ll call it out, but we want to promote the good news and promote the successes we’re going to have.”

Spicer said since being chosen to serve in the Trump White House, the reaction from fellow Alexandrians has been mostly positive.

“You know, Alexandria Republicans had an event Friday night down at Union Street [Public House] that was really touching,” he said. “[And] even my neighbors, despite the partisan differences some of us have, they said they were just proud to see a friend and a neighbor ascend like this.”

On the other side of the aisle, local Democrats say they have been energized since Election Day and are ready to fight to preserve their values in federal policy. Alexandria Democratic Committee chairman Clarence Tong said since the election, attendance at meetings has skyrocketed, and the committee needed to adjust its bylaws to accommodate the influx of new members.

And local Democrat Sarah Stott has formed a new group with fellow resident Jonathan Krall called Grassroots Alexandria to get people involved, regardless of political affiliation. Stott and others have been organizing an Alexandria contingent to participate in Saturday’s Women’s March on Washington.

“I want to put him on notice hat we are watching and that we are going to organize against things we don’t believe in.”

Marianne Anderson, the ADC’s vice chairwoman for precinct operations, doesn’t see her participation in the march as a protest against Trump, per se.

“I call it an exercise in solidarity,” she said. “I know people of all ages and all ethnic backgrounds and all sexual orientations, and I view them and us as coming together for a common cause, for the common good.

“I actually believe in some of the statements that outgoing President [Barack] Obama has made, that is that we can make a difference, that we must be out there, we must be present and we must speak out and believe in hope for our country.”

Local elected officials are joining protest efforts as well. U.S. Rep. Don Beyer (D-8) announced at a town hall Monday that he will boycott the inauguration ceremony, saying he refused to be part of “normalizing or legitimizing” Trump.

“His values and his actions are the antitheses of those I hold dear,” Beyer said. “It would be the height of hypocrisy for me to pretend to be part of this inaugural celebration.”

“I might remind Mr. Beyer that such condescending behavior will marginalize his effectiveness as he represents us on critical issues such as federal employee concerns and the billion dollar WMATA bailout resulting from decades of neglectful Democratic party mismanagement,” Lenehan said. “At precisely the time when Northern Virginians need a mature and reasoned voice at the negotiating table, Congressman Beyer has elected to give up his seat.”

Lenehan said in an interview that his organization is planning events locally for residents who don’t want to trek across the Potomac River to attend the inauguration in person.

“We have a big party scheduled for Friday night, our own inaugural ball if you will, down at the Old Dominion Boat Club,” he said. “And if people don’t want to go downtown but still want to watch with people, we’ll be having a lunch watch party over at Ramparts Tavern.”

Lenehan also noted an uptick in resident interest in the local Republican party.

“We’ve been seeing some pretty cool people coming through that haven’t been before and who want to get involved,” he said.

Chris Teale contributed to this report.