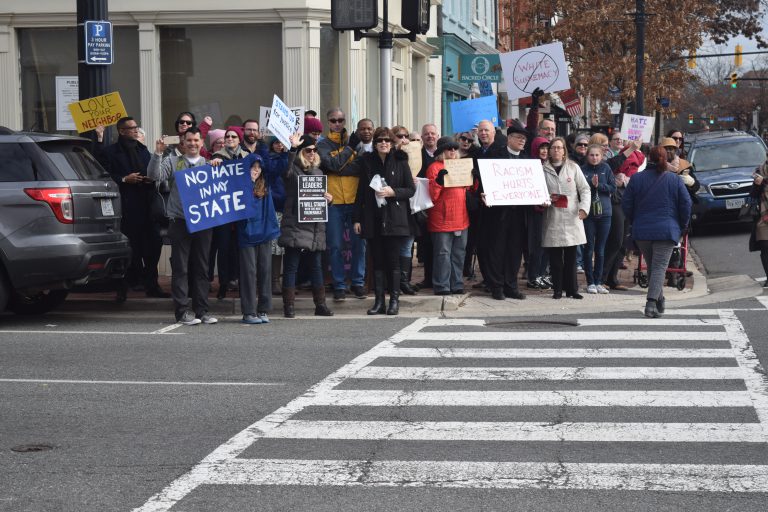 On Sunday afternoon, I gathered with members of Grassroots Alexandria, Delegate Mark Levine (D-45) and other activists to protest against Richard Spencer, a newcomer to Alexandria who is proud to assert his belief in “peaceful” white nationalism and “ethnic cleansing.”

Our group, easily totaling more than 50 people, protested peacefully for more than an hour at the intersection of King and Patrick streets.

There was concern that bringing attention to him could help him advance his cause, but we need to say, “Not in our Alexandria!” To make our point, our signs were aimed at promoting love, inclusion and justice, not hate.

The recent presidential election has placed an ill-prepared man in the most powerful job on earth. He has brought with him into the White House divisive figures like Steve Bannon, Mike Flynn and Stephen Miller.

One of his most despicable supporters though is too hot to bring so close. That man is Richard Spencer and Alexandria is about as close as he can get.

Spencer is known for running a white nationalist think tank called the National Policy Institute. And some of his supporters led an anti-Semitic harassment campaign in Whitefish, Mont., where he lived before moving to Alexandria.

After Trump’s victory last November, Spencer led a now infamous “Hail Trump” cheer among his followers, and some used a Nazi salute while celebrating.

Now, Spencer lives and works at 1001 King Street above a wonderful chocolate store that wants nothing to do with him. We refuse to ignore that.

No matter what kind of message Spencer perpetrates, we will continue to stand against him. Ultimately though, we must be primarily concerned with the people in power. We must confront and conquer an administration that omitted the fact that Jews were the targets of the Holocaust in its official statement on International Holocaust Remembrance Day and is aggressively targeting Muslims and Latinos.

By coming together, speaking out, using the courts and voting this June, this November and in the elections to come, we will ultimately defeat their hate and restore the American dream.