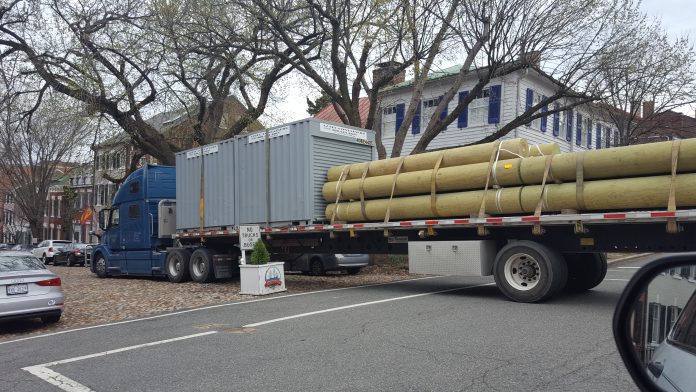 The historic cobblestones along Alexandria’s 100 block of Prince Street received an unwelcome visitor on March 20. Traffic impeded a delivery truck carrying wooden pilings belonging to subcontractor Pole and Timber from getting to the new Old Dominion Boat Club construction site at 0 Prince St. so the driver drove down the unpaved block.

The general contractor, Forrester Construction, was later fined $250 for taking the improper route, the second fine imposed on the company.

Some neighbors previously complained about trucks’ routes in connection with other waterfront redevelopment projects.

“The issue of truck haul routes has been around since waterfront development began,” said Bert Ely, co-chairman of the Friends of the Alexandria

Waterfront, a group opposed to waterfront development projects. “The challenge is catching [violators] in the acts. In this case, a resident got two good photos.

“There are to be absolutely no trucks on those streets. There have been numerous reports of damaged homes on the perimeter to the Robinson Terminal North and South projects.”

Last year, a city-commissioned report showed that seismic readings of construction-related vibration were “below the specified limiting threshold levels” at the 0 Prince Street site. The report did not touch on damages related to truck traffic.

The truck in question was driving along a designated hauling route, but could not deliver its payload to the ODBC site because other delivery trucks were parked within its turning radius, said Yon Lambert, director of the city department of transportation and environmental services, in an email.

The driver then drove north and turned left onto Cameron Street, left onto North Royal Street and down the historic cobblestone street without contacting the general contractor or city staff. The driver was stopped along Prince Street by a resident who called the police.

City staff spoke with the Alexandria police officer who responded to the complaint. The officer reported that the driver was asked to reverse back onto South Fairfax, and then was guided north toward Pendleton Street and then southbound on North Union Street on his way back to Prince Street where he was able to make the turn onto Prince toward the boat club site.

A representative for the Old Dominion Boat Club was not available for comment.

Lambert said in an email that the general contractor for the ODBC project has notified its subcontractors of the incident and reminded them of the designated haul route.

The designated haul route for inbound trucks is to use U.S. Route 1 and turn east onto Franklin Street and then Union Street. Outbound trucks along Union Street have been directed to turn westward on Gibbon Street toward U.S. Route 1. Trucks are not allowed to idle for longer than 10 minutes and any dirt, mud or debris that spills off trucks must be immediately cleaned by the contractor.

The city asked that all concerns related to hauling and construction be directed to Emilio K. Pundavela of the transportation department’s infrastructure and right-of-way division at 703-746-4095 or at emilio.pundavela@alexandriava.gov. Noise complaints should be directed to the city department of code administration at 703-746-4200.