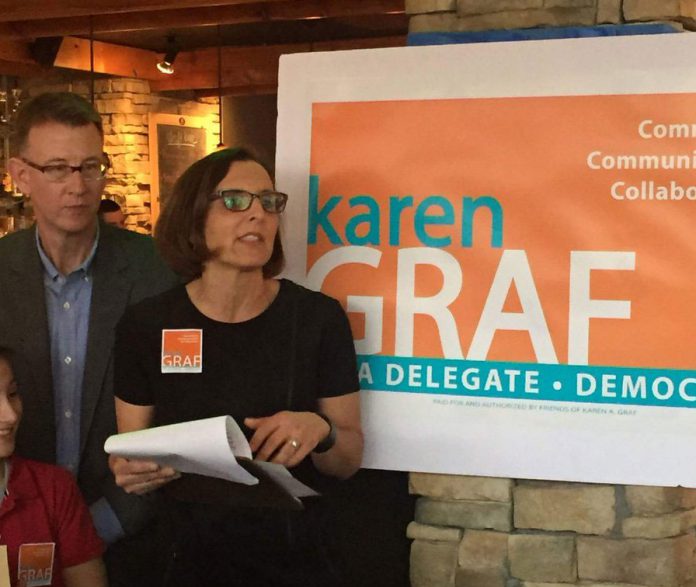 Former Alexandria School Board Chairwoman Karen Graf abruptly ended her quest for the Virginia House of Delegates last week, just one month after announcing her candidacy. Graf, who was challenging incumbent Delegate Mark Levine in the Democratic primary for the 45th District, gave no reason for opting out of the race.

“I cannot possibly express the gratitude to my community, family and friends for their belief in me,” Graf said in a statement. “The time, money and energy spent getting my campaign going was amazing. With the number of people prepared to endorse me, contribute to my campaign and work the streets, I am confident we could have won this thing.”

Graf served as chairwoman of the school board from 2012 through 2016 and remains a school board member. She said she was motivated to run for delegate by Donald Trump’s election as president.

“I have evaluated where my service can have the biggest impact and that is in my current position, with my current service commitments,” she wrote. “For the good of my family and the Democratic Party, I am ending my campaign here. Therefore, Richmond must wait.”

Levine said he has been unable to reach Graf since her campaign manager sent him a note on her decision. She did not respond to requests for further comment.

“In this election year of 2017, just after Trump’s election, I’ve seen more energy locally and nationally than I’ve ever seen in my life,” he said. “I’m really glad this energy can be directed toward winning back a Democratic House of Delegates and concentrating our efforts on Republican-held seats.”

Last month, the Democratic Party of Virginia announced it has recruited Democratic challengers to run against incumbent Republicans in 45 districts in the GOP-controlled House of Delegates, including 17 candidates in districts won by Hillary Clinton in last year’s presidential election.

Republicans hold 66 seats in the 100-seat House, and no Republican has announced their candidacy in the 45th district, which has remained in Democratic hands for decades.

Clarence Tong, chairman of the Alexandria Democratic Committee, said he also has not heard from Graf since her announcement.

“Mark has done a great job of representing us in Richmond, and I think that it’s a reflection of his record that he doesn’t have a challenger,” Tong said. “The filing date for any Democratic candidates is March 30.”

Tong said attendance at ADC meetings has more than doubled since Trump’s election, prompting the group to change its bylaws to allow more members.

“In Alexandria, we have a lot of Democratic activists and donors who believe in helping Democrats who are running in competitive races this year for the House,” he said. “We’ve already had volunteers go out and help the candidates in other parts in Northern Virginia, raising money and knocking on doors.”

Trump has a 38 percent approval rating in Virginia, according to a recent Quinnipiac poll.

“The early signs are good for Democrats,” said veteran political analyst Geoff Skelley of the University of Virginia Center for Politics. “But we’re way too early on at this point to make any dramatic effects on his approval, and its effect on state races. It’s a really tall order for them to win a majority.

“It doesn’t look like they will lose any [seats] that they are holding, but they actually have to sweep all of those 17 seats in districts that Clinton won to get a majority.”