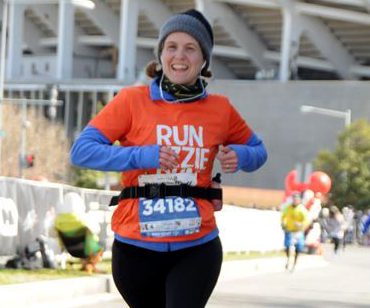 The last mile of last Saturday’s Rock ‘n’ Roll Marathon in D.C. was the hardest for Liz Dunning.

The first 25.2 miles went pretty smoothly, despite freezing conditions, with friends and co-workers cheering and giving her orange slices. And then a strong, freezing headwind on the final straightaway to RFK Stadium pushed her back, but she ran through it, over the finish line and into the welcoming arms of her family.

Dunning, who turns 40 next month, ran in memory of her mother Nancy Dunning, an Alexandria real estate agent known as the “Queen of Del Ray” who was 53 when she was shot and killed in broad daylight inside her home on December 5, 2003. Charles Severance was arrested in 2013 after two more killings, convicted in all three cases and given three life sentences plus 48 years in 2015.

Nancy Dunning’s birthday fell on the same day as the marathon: March 11.

“I felt really, really good,” she said. “I was with my family, with my friends. I was certainly tired, but I was pretty exhilarated. And pretty cold.”

Dunning, married for 12 years, grew up in Alexandria and was just 26 when her mother was killed. She now lives in D.C. and is the mother of two young boys.

She said she trained for 12 weeks before the race, started a blog to document her experience and collected more than $29,000 for the Brady Campaign Against Gun Violence. Her final race time was 4 hours and 29 minutes.

“When I realized there was a race on her birthday, I knew I had no choice but to run,” she said. “There’s nothing about acknowledging the death of your mom who is murdered with a marathon. … It should feel hard. It’s not a walk in the park to work through something like that.”

Severance’s actions, Liz Dunning believes, also led to the early death of her father, former Alexandria Sheriff James Dunning, in 2012 of heart failure at 62 years old. It was he and her brother, Chris, who found Nancy Dunning.

“That was a hard thing for [my dad] to carry,” she said. “The loss of her was brutal [for me] in a different way than my dad’s death. There is something very punishing and stark about being 35 and having both of your parents being dead.

“My kids never have never seen me be somebody else’s child. Their experience of me is of a grownup, not somebody’s daughter. They don’t hear, ‘When your mom was your age, she gave me such a hard time.’ That doesn’t happen because my parents are gone.”

Dunning’s cousin Kate Moran cheered her on and handed her orange slices at four separate checkpoints.

“Faced with the unimaginable, you still have to rise, you still keep moving, you still show up,” Moran said. “Her blog is filled with motivating, insightful words and her smile was larger than life on race day. Liz is awesome and I am so proud of what she is doing.”

It was Dunning’s second marathon. Her first was when she was 23, and her mother cheered her on. She said she can’t think of her mom without the presence of her father.

“My parents are with me because they are part of me,” Dunning said. “Their lessons and their love and support are embedded in the way that I live my life. I can hear their voices. I can access who they were.”

One of Dunning’s greatest challenges since her mother’s death has been staying positive.

“She was my mom, but she was also my best friend,” she said. “Part of my thinking early on was that if I lose my ability to be a happy, joyful person, I am doing both of my parents a disservice, and I am adding to the body count here.”