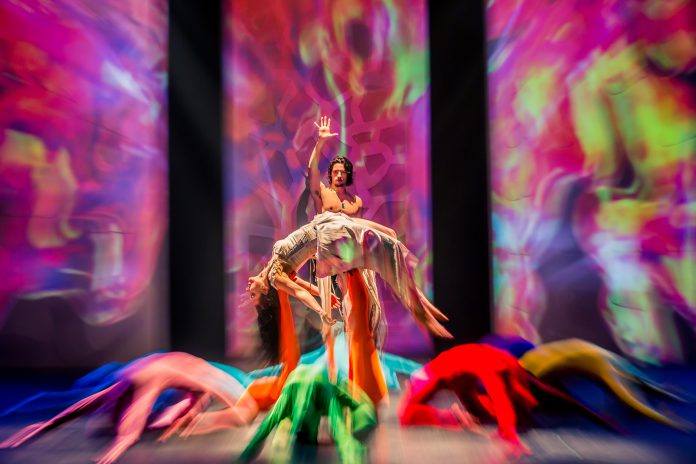 Some of Synetic Theater’s “Silent Shakespeare” series productions are of the more classical variety: knights in leather armor and ladies in diaphanous gowns, kings with proper crowns and gallant, swaggering lads who rescue damsels.

That works for those who like their Shakespeare neat and undiluted. For my money, the crazier, the more outlandish and sexier a production is, the more I’m going to love it. Such is the case with “The Taming of the Shrew.”

Directed by Irina Tsikurishvili, one of the founding members of the Georgian troupe along with her husband Paata, this new version of the tale is decidedly over the top and outrageous.

We need this. It’s a straight 90 minutes of madcap silliness strung together by a familiar plot and performed by a cast of inspired dancers. Sign me up.

The explosive sounds of thunder and lightning frame the little scene. As they depart, several gentlemen lovingly kiss the hand of Katherina (Irina Tsikurishvili). One brazen swain grabs her, bends her backwards and plants one on her lips.

She is the most sought after and unattainable of all — a girl on fire garnering headlines in the scandal sheets for her uncontrollable behavior. Her sister, Bianca (Nutsa Tediashvili), a flirty starlet glamorously clad in an electric yellow mini dress, is no match for her sister’s intensity.

As for her paramour Lucentio (Justin J. Bell), he must woo Bianca quietly, and does it as a woman in a tiny dress and Louise Brooks bob as her music teacher. It’s outlandish, beyond the pale and such fun.

The story is set in Paduawood, where the iconic Hollywood sign has been replaced. Here the men are flashy hipsters in pegged trousers, the women fiercely trendy and the paparazzi ubiquitous. It’s all about the nightlife, hooking up at the club and posing for the camera.

Petrucchio, selected by Katherina’s father to pursue her in marriage, is a painter bereft of inspiration. He is portrayed by the sensational dancer Ryan Sellers, whose acrobatic leaps are Baryshnikovian and whose physical attributes are swoon-worthy.

His fights with Katherina are as deliciously chaotic as the steamy love scenes. Tsikurishvili mirrors his enmity and passion exquisitely. This may be one of her greatest roles — one in which she shows her magnificent range as a both a comic actor and powerhouse performer.

Zana Gankhuyag has choreographed this unique and visually sensuous production, showing off this talented cast to its fullest. And credit Anastasia Rurikova Simes for the countless, elaborate, crazy costumes that never fail to amuse, most inexplicably in a banquet where all the guests except Katherina wear massive chicken heads and a girl in skimpy black patent leather biker gear lures Petrucchio from atop a motorcycle.

This is a brilliant, manic and off-the-wall production. Highly recommended.