The Alexandria City Council is poised to approve an unprecedented 5.7 cent real estate tax hike when it votes to approve a $728.1 million general fund budget, or a 7.3 percent increase over last year’s budget, on Thursday evening.

Under the proposal, introduced last month by Vice Mayor Justin Wilson, the city’s real property tax rate would increase to $1.13 per $100 of assessed value. It means that the average Alexandrian should expect to pay an additional $459 in taxes and fees next fiscal year. The total would have been $70 higher, except the city waived the first installment of the biannually billed storm water fee to give itself time to establish processes for accepting payments from residents.

Mayor Allison Silberberg was the lone dissenting opinion, calling Wilson’s tax increase too burdensome on Alexandria taxpayers, while her own compromise to raise the 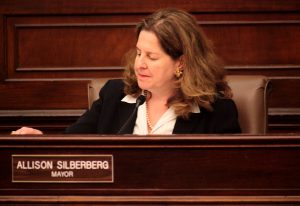 real estate tax rate to 3.6 cents was not supported by any councilor at the final council add/delete session.

Nor was her proposal from the previous week, which delayed a number of capital projects, raised the tax rate by 3 cents and was called “irresponsible” by Wilson.

“I do continue to believe that the proposed 5.7 cent tax increase is too much to ask of our residents to shoulder at this time,” Silberberg said at the meeting. The new proposed taxes and fees would cost the average Alexandria homeowner about $600 more in taxes this year.

The writing was on the wall a month ago, when council voted 6-1, with Silberberg casting the dissenting vote, on Wilson’s proposal to advertise a 5.7 cent increase, which is a full 3 cents higher than City Manager Mark Jinks’ 2.7 cent proposal to cover long-delayed capital improvement projects at a number of city schools, public buildings, the city’s massive combined sewer outfalls project and Metrorail improvements.

Wilson presented his proposal last month after council’s budget public hearing, where a number of students, parents, teachers and administrators advocated for improvements to a school system bursting at the seams capacity-wise and with many aging buildings.

“Frankly, we’ve never had as many students in ACPS as we have now,” said Councilman John Chapman. “Throughout the community, we are in a severe deficit in terms of seats. I’ve visited schools where we do have children [learning] in what used to be store rooms for books and equipment and things like that.” 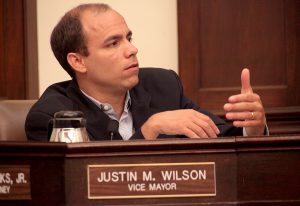 Wilson said that Silberberg was kicking the can down the road with her proposal to defer improvements at the Simpson Dog Park, the replacement of parking meters in the city’s Carlyle neighborhood and delaying $2.5 million in improvements to Fort Ward Park Field and the Hensley Park soccer field.

“There is no advantage gained by deferring projects that ultimately are going to have to get done,” Wilson said. “They… get more expensive and we have to expend additional operating expenses to buy ourselves additional time.”

Wilson’s proposal also includes the creation of a joint Ad Hoc Alexandria Municipal Facilities Plan Steering Committee to work with the city manager to prioritize and coordinate capital spending within the city and school system.

Councilor Paul Smedberg said that ensuring the efficacy of the task force was the only way he felt comfortable voting for the tax increase.

“If we do this, once and for all we end the politics and the games [with the school system] that surrounded this ever since I’ve been on council,” he said. “We have this task force that, again, the city manager controls and manages and leads, that it is small, it’s accountable.”

Wilson’s proposal also covers funding for the Church of the Resurrection affordable housing project. Last month, Rev. Jo Belser, rector at the church, asked council to move $4.3 million so that the church’s gift of 113 units of affordable housing for families can be realized in the 2018 low-income housing tax credit cycle. She said the funding would leverage the total project value of roughly $43 million and add about $200,000 to the city’s tax rolls.

City Councilor Tim Lovain supports the 5.7-cent increase. He said he appreciated Silberberg’s spirit of compromise, but that her proposal did not adequately fund the capital improvement needs of the city’s public school system.

“It’s not a pleasant task to raise taxes that much to address that issue,” Lovain said. “Our kids need it and deserve it and we need to do this.”

The Alexandria City Council will vote on its FY2018 budget Thursday at 7 p.m.