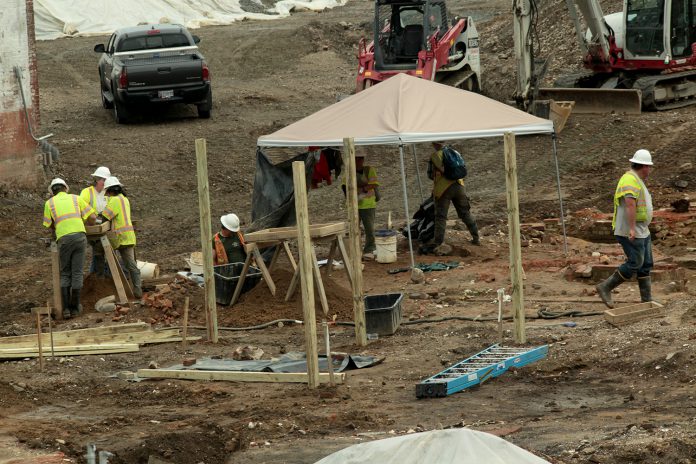 The burial remains of two people and a wooden coffin were discovered last week at Alexandria’s Robinson Terminal South construction project. Developer EYA, which owns the site and hopes to turn it into luxury condominiums and townhouses near the waterfront,was going through its archaeological excavation requirement to build on the site when the remains were discovered on May 18.

“We are in the preliminary stages of collecting information here,” said Eleanor Breen, an archeologist with the Office of Historic Alexandria, the overseeing office that will disseminate the findings of EYA’s investigation. “The developer was required to get a permit from the state to do an investigation, and an initial investigation is completed, and determined that they were, in fact, burials.”

Archeologists contracted with EYA found two bodies and the remnants of a wooden coffin, specifically coffin hardware — either latches or hinges. The sex, age and identities of the discovered individuals is not yet known.

“We believe that the burials date to the 1700s and 1800s, because of the larger context of the site,” said Breen.

The Robinson Terminal South site — across the street from the just-opened Hotel Indigo Indigo – was once home to a four-story warehouse belonging to Robert Hooe, a wealthy merchant and former mayor of Alexandria. In the late 1700s, the warehouse was used to store and sell food and goods imported from around the world. The site also included dwellings and outbuildings.

The project, which was slated to begin selling properties in June, will face delays because of the find, said Cheryl Haar, EYA’s vice president of marketing.

“When this archeological find was made, we understood that it was going to probably take several weeks to remedy and go through the protocol of what is required. We are working very closely with the city on this, and our hope is that we should be opening for sales right after Labor Day, but of course, first things first,” Haar said.

This is just the latest historical find during digs for reconstruction projects in the Port City. Archaeologists have been required to be present at all development locations with the potential to contain buried sites of historical significance since the city council passed the Alexandria Archaeological Protection Code in 1989.

Bob Wood, a Republican who ran for city council in 2015, lives three blocks away from the site, and said that he is not surprised by the discoveries.

The Alexandria City website has devoted a page to archaeological discoveries on the waterfront, like when a 50-foot 18th-century cargo vessel and the remains of John Carlyle’s 1755 public warehouse were discovered in December 2015 at the site of the now-Hotel Indigo, 220 S. Union St. Alexandria Archaeology also has a museum on the third floor of the Torpedo Factory at 105 N. Union St.

“This is another exciting discovery in our ongoing efforts to understand and preserve Alexandria’s history,” said J. Lance Mallamo, director of the Office of Historic Alexandria. “We are committed to treating these remains with respect while determining
who they may have been and what the most appropriate course of action will be based on their discovery.”

The site is not open to public visitation.