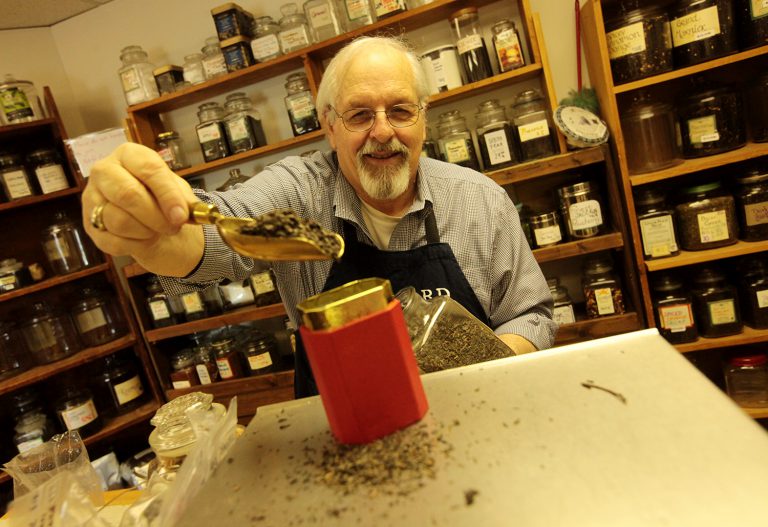 Frank Poland is deep in a conversation with a customer about tea at Old Town Coffee, Tea and Spice on a Thursday afternoon in late April.

Between answering questions, he switches effortlessly between approaching customers browsing his wares, many of them regulars, and offering samples of coffee and mini donuts. If it seems like Poland has been in retail for a long time, it’s because he has – 22 years to be exact.

That time is coming to an end for Poland, who is about to close the shop for good.

For Poland, shuttering his store just made sense. The shop had moved from its original location – 215 S. Union St. – last year after the owner of the building raised the rent and, lately, he and his wife have been considering moving to Maine.

And though Poland, who just turned 72, had wanted to sell the business, he didn’t get any bites when he tried to find interested parties.

“The hope was that somebody would take over the business, but nobody wants to stand all day and man the shop,” Poland said. “In this town, you’re nobody if you don’t have a laptop and a desk.”

It’s the end of an era for some of Poland’s devoted customers, including Laura Clerici, a local artist who often frequents the shop to visit its proprietor.

“It’s a little bit like a salon. People sit with Frank and sip coffee,” Clerici, who has been coming to the shop on a frequent basis for six years, said. “It’s a social center.”

Poland’s shop, with its knick-knacks, exotic candies and rows of tea and coffee, is an institution for some. It wasn’t a path that Poland had planned before taking over Old Town Coffee, Tea and Spice from its original owner. Blame D.C. area traffic for making Poland consider buying the store in 1995.

“I didn’t want to die doing laps on the Beltway,” he jokes while standing behind one of the numerous counters.

In the store’s last weeks, he channeled his inner salesman to sell anything that’s not chained to the wall at his 205 Strand St. location – dishes, coffee-making equipment, display cases and, of course, the seemingly endless rows of tea and coffee, though choices have been slim for coffee in his last few weeks of business.

As Poland reflected on his two decades at the helm of Old Town Coffee, a couple of memories came to mind. There was surviving Hurricane Isabel, which hit Virginia in 2003, on the downside. More positively, there’s the memory of his longtime customers pitching in to help him move the store across the street last year at a time when he was sure he would have to close.

The highlight for Poland has been his experience with customers – for better or worse.

“The good thing was always when the customers would find something they like,” Poland said.

Clerici said Poland’s shop isn’t the only independently owned store to close amidst a growing tide of development in Old Town. She said more mom-and-pop stores will likely be priced out of the area.

“Landlords are expecting higher rents. A lot of places where people can just sit and relax are going away,” Clerici said. “Those neat places are closing and being replaced by bigger chains.”

Although Poland attributes the death of Old Town Coffee to natural causes, he agrees that the climate for independent shops is getting more difficult – and fewer people are electing to deal with the challenges of starting a business in Old Town.

“There aren’t so many anymore. That’s changed the character of the town,” Poland said. “Alexandria is not small business friendly.”

As a group of customers left the store on that late April afternoon, Poland chatted with Clerici and another longtime customer about everything from coffee brewing techniques to what kind of discounts he would give them for certain products. They exchanged jokes over espresso and tea.

That’s an atmosphere that Clerici said can’t be replicated.

“It’s one of those things that’s gone and it isn’t coming back,” Clerici said.