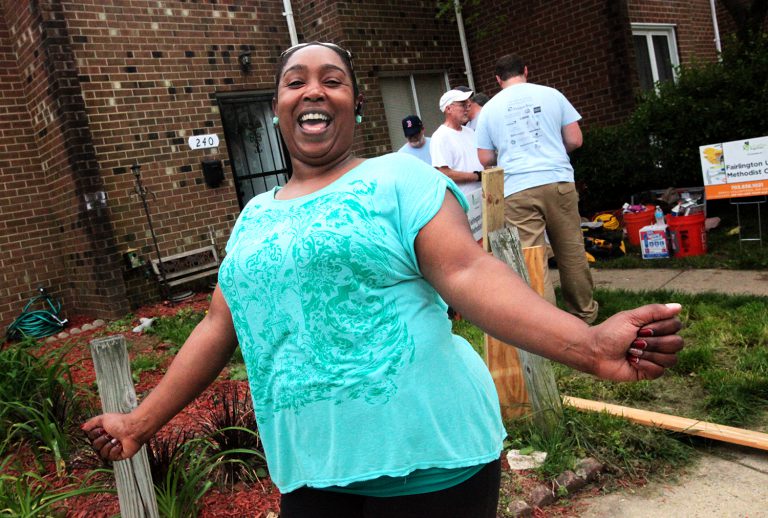 Tarsha Rice is calm when her five children are safe, the bills are paid and she can walk through her home without seeing problems she can’t afford to fix. That’s hard to achieve when the kids are growing, the bills are mounting and her three-bedroom, two-story townhome in the city’s West End has been falling apart for years.

“For years it’s all been about applying band aids,” Rice said. “I inherited the house, and first I was thinking that it needed only cosmetic improvements, like some paint on the walls here, some carpentry there… Until plumbing issues arose, electrical issues, and back then I was young and never experienced anything like this before.”

Rice inherited the house nearly 20 years ago and now, at 42, the early childhood development specialist at the Campagna Center has thought of selling the Stevenson Square house more than once. After all, she said, it’s now worth $383,000 – a reasonably hefty return on the $19,000 that her grandmother, Clarice “Mickey” Rice, paid for it back in 1970.

However, selling your childhood home can be easier said than done.

“The memories will go with me wherever I am, but when I considered relocating I realized

that it does have some sort of a physical, sentimental value for me. This was my safe space if I needed refuge,” Rice said. “It didn’t come easy with [Mickey], but the house was there for me. As long as you were honest and forthcoming and rightfully trying to make good choices, no problem. You could come and stay.”

Raising five kids in Northern Virginia isn’t cheap. Rice’s eldest son, 23-year-old Deamonte Rice, will soon be moving out to his first apartment, brothers Devone, 21, and Desean, 9, share a bedroom, sisters Makayla, 17, and Makiah, 16, share another and their mother occupies the master bedroom. Staying in the home meant spending cash that she simply didn’t have.

That’s something Rebuilding Together Alexandria – a local nonprofit devoted to rehabilitating housing for low-income, military or elderly residents – works to fix. Now in its 30th year, the organization took part in National Rebuilding Day on Saturday by gathering 700 volunteers to work on 43 houses in all.

The Rice household was one of those 43 projects. Rebuilding Together Alexandria’s efforts on their home included installing kitchen cabinets and counters, a new stove, dishwasher, microwave and replacing the doors on the exterior tool shed.

In the 30 years that Rebuilding Together Alexandria has been in operation, it has contributed $7.3 million worth of in-kind labor and materials provided by 24,000 volunteers to more than 2,000 homes throughout Alexandria. Rebuilding Together will handle roughly 130 projects this year, and this fiscal year secured $1 million for its budget, coming mostly from in-kind donations, corporate and foundation donations and, lastly, from federal grants.

Homeowners who apply for assistance must live in the city and qualify as low income, and projects that are safety and health related take precedence over those that are cosmetic in nature.

Rebuilding Together President and CEO Katharine Dixon, present at many of the construction sites on Saturday, labeled the day a success.

“It was a fabulous day. We were able to help so many Alexandria residents,” said Dixon. “I’m sure if caught I would have numerous speeding tickets, because I ran around the city and visited as many volunteer teams as possible to thank them in person, because they are really doing the work, and I wanted to show them and tell them how much this is really appreciated.”

The work, however, isn’t getting any easier. The U.S. Department of Housing and Urban Development is one of the federal agencies whose budget has been mentioned as a potential target of budget cutting efforts. If cuts take place, entities like Rebuilding Together Alexandria that receive HUD funding will be impacted.

That means that city residents like Lois Brooks, 92, may not get the help they need.

Brooks lives alone in her one-level, three-bedroom rambler close to T.C. Williams High School. She lost her husband, Courtney, in 2005 and her only son, Ronald, last year. As Brooks has aged, her eyesight has diminished, leaving it more difficult for her to maintain the house. At the same time, her basement has flooded every time it’s rained and through the years it has decayed and become filled with mold and moisture.

Still, Brooks wants to stay in the house, which she’s called home for 53 years.

“This place means everything to me. It’s home,” Brooks said. “So many people my age don’t have homes. They are living in assisted living places and hotels and other people’s houses. I’m lucky. I have a home. I have grandchildren and I’m happy.”

A team of 18 volunteers contributed to re-grade the soil around her house, install new pipes to redirect rainwater and paint the basement with waterproof paint. Volunteers also replaced the hand railings, the back screen door, the front door lock and curtain rods for the front window.

“They don’t mention money, or what it costs or nothing,” Brooks said of the Rebuilding Together volunteers. “It would have been impossible.”

Volunteer team leader Dwaine McCollum, a retired firefighter, has worked with Rebuilding Together Alexandria for 18 years. He started planning the work on Brooks’ home the week before, though he chuckled at the irony of a former firefighter dealing with flooding issues.

“There was a big snowstorm last year, and after that every time it rained the water would funnel through the gutters and the downspouts and everything would just run into the basement,” McCollum said. “As a firefighter, I used to work the other end of construction – deconstruction. Now we’re trying to keep the houses up, whereas before I was trying to tear them down.”

It was the second year of volunteering for Emily Lovell.

“I’m really passionate about affordable housing, and it’s always fun to be here in a hands-on way and feel like you’re actually doing something,” Lovell said.

Brooks said it would have been impossible for the work to be done without Rebuilding Together.

“I would have just seen the water keep coming into the basement, and I’d have to keep sopping it up,” she said. “The front door didn’t lock right, so I never used it. I just used the back door the last three or four years.”

The ultimate goal of Rebuilding Together is to extend the time families, particularly those that might be priced out of Alexandria altogether, have in their homes.

For families like the Rices, extending the lifespan of their home preserves not just their livelihoods, but their family history. Tarsha Rice’s oldest child, Deamonte, never wants to see his family home sold.

“The house means everything to me,” he said. “It’s where my great grandmother lived, and she was my favorite person in the whole world, and I sit in the same chair that she sat in day after day, year after year. I can feel her in the house. I feel at ease, that there is nothing in the world that can touch me while I’m there. I feel that if I ever lost the house I would search for the same kind of thing from that time on.”

His mother agreed. Sitting outside of the house at a nearby park, Tarsha Rice talked about the tragedy and joy that comes with a home. One morning in 1987, for instance, her four-year-old brother, Harold Lucas, was playing with matches and died tragically in an upstairs bedroom. The family moved back in a year later after the home was reconstructed. Ten years later, Mickey, who was entering into the early stages of dementia, gave then-20-year-old Tarsha the home. Mickey died three years later at the age of 69.

“If a day comes when we don’t have the amount of food that we’re used to, if the lights are out, that’s ok. Like comes with challenges, and challenges don’t last always. It’s how you plan and allow your mindset to travel that determines when and if you get out of that spot,” Tarsha Rice said.

Rice said she never could have completed or afforded the work on her own.

“In addition to all the work on the house, the kind words of support, the good intentions and understanding and selflessness to give of their time and energy was just priceless,” she said. “It’s hard to run across individuals, let alone a group who want to help. It’s such a blessing and a testament that all is not bad in the world, and there are good people who give to others in a non-judgmental way.”