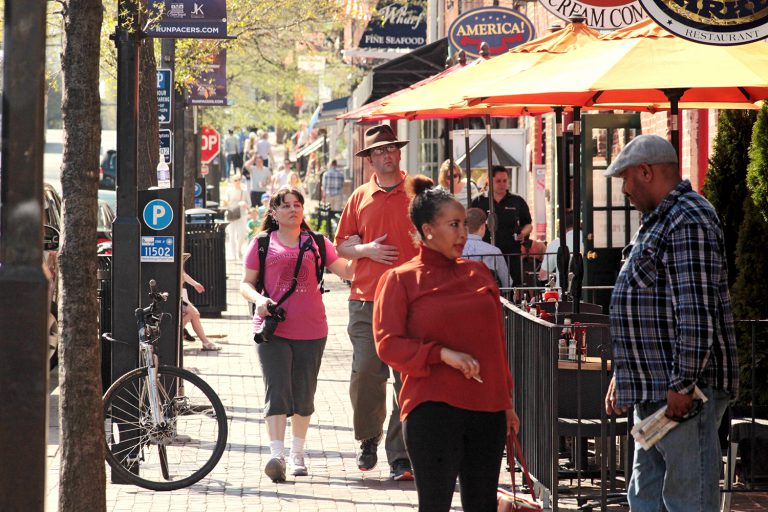 After months of heated debate, plans for a business improvement district in Old Town are being put on hold for the summer, though a proposal put forward by four council members and approved at the meeting sets the stage for a new BID plan to form during the months council is on recess.

The vote on a BID, originally slated for the June 24 public hearing and pushed to a discussion at Tuesday’s legislative meeting, couldn’t happen due to the city not meeting the requirement to advertise it three times before a vote, City Manager Mark Jinks announced before the discussion began.

City council members, however, took the opportunity to discuss how they’d like to see a new proposal formed by the city manager over the summer. An agreement, signed by Vice Mayor Justin Wilson and Councilmen Paul Smedberg, John Chapman and Willie Bailey and agreed to by the other two council members, outlined how a new and improved BID proposal should look.

Smedberg said the proposal formed after the public hearing on June 24 and in response to the numerous emails that were sent, mostly by BID opponents.

“It was done in the spirit of taking advantage of the work and conversation that has taken place,” Smedberg said at the legislative meeting. “After the debate on Saturday, the emails we received, what I particularly found interesting were the comments coming in from opponents.”

The proposal, approved 7-0, directs the city manager to prepare a proposal with three specific criteria: the BID’s boundaries, a specific list of services a BID would provide and a framework budget for a BID. All three of those criteria were absent from the proposal put forward by the BID exploratory committee, though the Alexandria Economic Development Partnership described the initial proposal as a “straw man” and planned to leave those decisions to a board that would have been formed after a BID was approved by council.

Once the revised BID plan is completed, both commercial property owners and business owners within the BID boundaries would be polled by a third party voting administrator, and, if the proposal is approved by more than 55 percent of the vote, the city manager would docket it for a city council vote no later than October 2017.

City council members were in agreement that sending the BID back to the drawing board was the right way forward, though Mayor Allison Silberberg still had concerns over plans for a revised BID plan. She expressed support for a survey that would be sent out to commercial property owners and business owners over the summer.

“Going forward, I think we should have others in the community weigh in and be of help,” Silberberg said.

City council members, however, said that a survey wouldn’t help move a BID proposal forward and that the proposal put forward by four council members would at least create a starting point and a way for those who would be affected by a BID to make their voices heard.

“This either needs to live or die with businesses,” Chapman said. “We’ve heard input from both sides. The idea, to me, of moving back to a survey is taking a couple steps back.

Bailey agreed with Chapman, saying that the proposal put forward was a way for the BID to be talked out over the summer.

“It’s worth having, but it’s up to local businesses to sign on,” Bailey said. “I think after giving a couple of months to talk it out, we can go from there. Hopefully everything will work out, but it’s up to the businesses.”

Although Councilwoman Del Pepper’s name wasn’t on the agreement, she said that she supported it.

“For the most part, I want to try this. I want to see what it could do for Alexandria,” Pepper said. “I want to see what we can do. This has the potential to be very, very helpful. If we continue going down the path that we’re going, this is not going to be sustainable.”

Councilman Tim Lovain also agreed with the proposal, saying that there are many benefits that can be gained from a BID – but that the process has to improve.

“We need something where business input is much more extensive. And we need the city to make sure the process keeps moving,” Lovain said. “The proposal that’s before us is a really good one.”

Wilson said his hope is that the BID proposal doesn’t become something that’s talked about and studied instead of acted on.

“We’re really good at studying things and less good at doing things. I think [the BID] is an idea that’s come up over and over again,” he said. “Let’s get to a point where we can have a vote. Then let’s refine a proposal… If this is something people support, we can quickly adopt it and approve it. If there’s not support, it’ll be clear one way or another.”