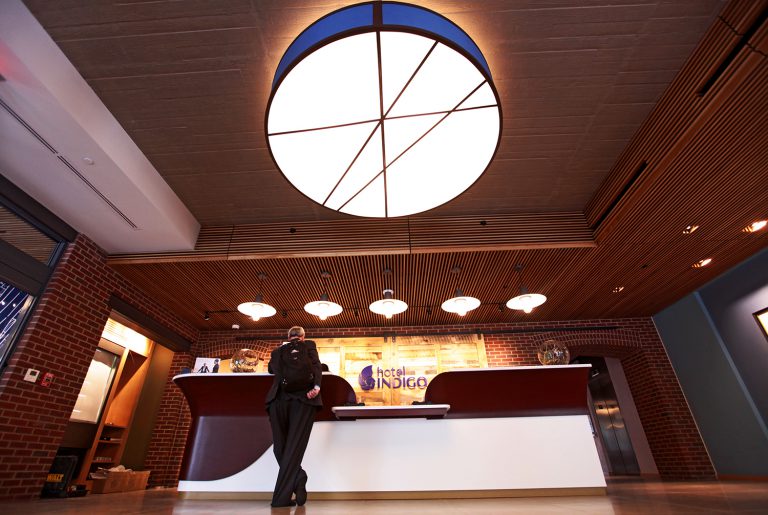 Hotel Indigo isn’t the only new hotel that will break into the market in Old Town in the next few years. Two more small hotels are planned for the Old and Historic District.

One of them, Hyatt Centric King Street, which is being developed by Magna Hospitality, won unanimous approval for a special use permit for requested alterations to their development plan at a city council public hearing on May 13.

Hyatt Centric will be built on the 1600 and 1700 blocks of King Street and will add 124 rooms to Old Town’s supply. The project will also contain 10,000 square feet of office space and 2,500 square feet of retail. The other planned project is at 115 S. Union St. and would convert an existing office and retail building into a 64-room boutique hotel.

Like the Hotel Indigo development, these proposals aren’t without their critics. In the case of Hyatt Centric, 10 residents of the surrounding neighborhood, mostly residents living on bordering Harvard Street, spoke out against the planned development at the public hearing.

“It’s totally destructive to the neighborhood, where residents depend on parking off street,” Townsend “Van” Van Fleet said. “Hotel parking will be an absolute nightmare. This is a massive parking reduction and will have a major impact on the neighborhood.”

Jeff Larrimore, who lives on Harvard Street, said neighborhood residents are united in their disapproval.

“The overwhelming sentiment is that the hotel is too large for Harvard Street,” Larrimore said. “It’s a oneway residential street. This would present a substantial adverse effect.”

Despite this strong opposition from neighbors, Hyatt won a special use permit from city council that will both allow the building to be used as a hotel and reduce the number of required parking spaces from 87 to 55 for the hotel and from 20 to 14 for office tenants. The proposed hotel on Union Street is at an earlier development stage and therefore light on details, though at this point plans include a 115-seat restaurant on the ground floor.

The possibility of three new boutique hotels in Old Town is good news for Visit Alexandria, which has seen an uptick in hotel occupancy rates in Alexandria over the last two years.

“I think they are definitely a boon to our economy, to tourism and hospitality in general,” Visit Alexandria CEO Patricia Washington said.

Washington said adding hotels in Old Town is particularly promising, as visitors that are new to Alexandria often want to stay in the core of the city.

“Old Town is the gateway to the entire city. A lot of times when people think of Alexandria, they think of Old Town,” Washington said. “They get to know who we are as a community and then they venture out and come back for return visits. They learn a little bit about other neighborhoods, like Del Ray and the West End.”

Alexandria’s overall hotel occupancy rate for the current fiscal year, from July 2016 to April 2017, is 71.1 percent, according to Visit Alexandria, and the organization predicts it will finish at about 73 percent. In Old Town itself, there are 2,090 hotel rooms spread over 12 hotels. The occupancy rate for Old Town – 85.2 percent for the month of April 2017 – also indicates there’s room for more growth.

Washington said boutique hotels that incorporate local features are especially attractive to visitors looking for a more authentic experience. Hotel Indigo has several authenticating aspects, such as the inclusion of long-time local chef Cathal Armstrong’s Hummingbird restaurant and artwork from the Torpedo Factory.

“These kinds of local touches benefit the restaurateurs, the artists, the residents. It really is a win/win,” Washington said. “It resonates with visitors who, more and more, are looking for a local, special, unique experience that you can’t get anywhere else.”