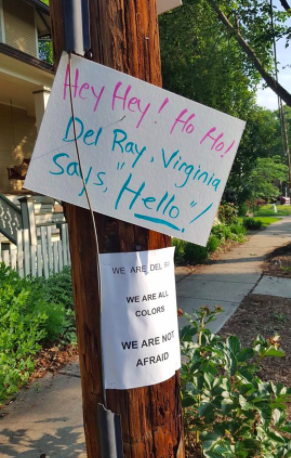 Residents of the Del Ray neighborhood woke up on Saturday morning to find flyers with racist messages plastered on utility polls and car windshields around Commonwealth and Mount Vernon avenues and East Uhler and East Custis avenues.

Del Ray resident Eric Wagner was walking his dog around 7 a.m. when he found the flyers, bearing slogans including “around blacks never relax,” “the lying press,” “you’re losing your country, white man!” and “fascism, the next step for America.”

Another flyer had personal information on C. Christine Fair, the Georgetown professor who confronted altright leader Richard Spencer at an Alexandria gym on May 17.

“I ripped [the flyer] off and literally a step later, on every utility poll, on every tree, on every car, there were more of these flyers,” Wagner said. “There were eight different designs and they were everywhere.”

Wagner said there were at least 50 flyers hung in the area, which were later removed by residents. He gave some flyers to the Alexandria Police Department, which is still investigating the incident. The flyers originate from Vanguard America, a white supremacist group that makes the material available for download on its website, bloodandsoil.org. Wagner also posted the photos on Facebook, which prompted a reaction throughout the community, resulting in responses from Alexandria residents and city leaders.

Although the posters originate with Vanguard America, the identities of the individuals who posted them are not clear. It’s also not clear what crime the individuals responsible could be charged with. Alexandria Police Department Spokeswoman Crystal Nosal called the flyers “objectionable to many,” but said that there is no codified crime for hate speech.

The flyers don’t easily fit into the category of a hate crime, which is defined as a “criminal act committed against a person or his property with the specific intent of instilling fear or intimidation in the individual against whom the act is perpetrated because of race, religion or ethnic origin.” The individual or individuals who posted the flyers did violate an Alexandria city ordinance (Sec. 11-12-2), which prohibits graffiti on public or private property, a category which utility and public service equipment and vehicles fall into.

The flyers come a week after an altercation between Richard Spencer, who runs the website AltRight.com and has offices at 1001 King St., and Fair at the Old Town location of Sport and Health became national news. Many were quick to note the connection, though neither Spencer nor his website have taken ownership of the action. It’s unclear if there’s any affiliation between Vanguard America and Spencer.

Spencer did not respond to requests for comment from the Alexandria Times.

Fair, who confronted Spencer at the gym, said she appreciated the response of the Del Ray community.

“Del Ray is simply not receptive to their campaign of racist, anti-Semitic, misogynist and otherwise bigoted messages. My community demonstrated that on Saturday,” Fair said. “I love that Del Raniacs took the flyers down and put up messages of tolerance in their place.”

Fair indicated she believes Spencer is responsible for the flyers.

“I think this was a strategic over-reach on their part. Anyone who somehow believed that Spencer was unfairly victimized because the gym privileged its employees’ right to a safe workplace over his right to be a Nazi or minimized what he and his ilk are about got a good schooling about what the stakes are for our community and our country. These people want ethnic cleansing,” Fair said.

City leaders and state chapters of national organizations have condemned the flyers since news broke on Saturday. The NAACP’s Alexandria chapter released a statement condemning the flyers, saying that they are “a reminder of the climate individuals of the African diaspora has had to endure for many years.”

“Posting of the material without taking ownership is a display of cowardice and a sign of growing boldness of persons existing in our midst. The NAACP has taken note of the harsh rhetoric and the anti-civil rights actions of the Trump Administration’s Department of Injustice. We don’t think it is a coincidence that we now have the unwanted presence in Old Town of the infamous Richard Spencer and his altright, neo-Confederate, white nationalist National Policy Institute right in our midst,” Christopher Harris, president of the Alexandria NAACP, said in a statement.

Mayor Allison Silberberg, who advocated for the statement on inclusiveness that was passed after the presidential election in November 2016, quickly denounced the flyers over the weekend.

“Alexandria is a city of kindness and compassion,” Silberberg said. “We are a city that is inclusive, accepting and embracing. Diversity is a core value here. We, as a community, are far stronger than a few flyers, and we will remain steadfast in our commitment to these values, which we hold so dear. Shame on those who have posted these hateful flyers. Such acts do not reflect the values of our beloved community and nation.”

Vice Mayor Justin Wilson said that the flyers will bring the community closer together.

“The signs are obviously very disturbing, but the people who posted them underestimate our neighborhood and our city,” Wilson said. “They will not divide us. We will not give them more attention than they deserve, and instead focus on what brings us together.”

Delegate Mark Levine (D- 45) called the flyers a “shocking wake up call.” “I have spoken at many protests against Richard Spencer and his disgusting neo-Nazi band of followers,” Levine said. “My only solace is that I believe they littered our city with this hate-filled trash as a reaction by them to their knowing how unwelcome in Alexandria they are. Hopefully, they will soon have enough and leave.”

Sean Lenehan, chairman of the Alexandria Republican City Committee, also spoke out against the flyers in a statement.

“These posters are the antithesis of everything Republicans stand for, and we condemn them in the strongest possible terms,” Lenehan said. T

he ACLU of Virginia said the city didn’t violate free speech in removing the flyers. ACLU Virginia Director of Public Policy and Communications Bill Farrar said he would encourage the city to not create any ordinances curbing free speech.

“It’s not the message that we object to. It’s not classified as free speech because of the ordinance prohibiting graffiti. I think the city acted within its rights to remove the flyers. Beyond that, we have to be careful about imposing or advocating restrictions, no matter how distasteful,” Farrar said.

After the flyers were removed, they were replaced with new messages from the Del Ray community. The new flyers and posters had more positive slogans, reading,

“Hey Hey! We’re Del Ray. Everyone’s welcome to come and stay,” “We are Del Ray. We are all colors. We are not afraid,” and “Love lives here.”

“I hope community members will use this outrageous and disturbing incident to form tighter bonds with their neighbors,” City Councilman John Chapman said. “I hope Alexandria is an inclusive city that won’t be rattled by immature acts of hate.”

James Cullum contributed to this report